Canada’s foremost contemporary dance company, Ballet British Columbia, stunned in its London debut with a vibrant triple bill of works by women choreographers: What, When and Where

6 CW readers are interested
Ballet British Columbia Review 4 Ballet British Columbia Review Teresa Guerreiro
You can’t go wrong if you pick a work by Crystal Pite for the centrepiece of your programme. Canada’s Crystal Pite is one of the most admired choreographers working today; her talent for extracting deep emotional resonance from technically exacting choreography makes her one of the most in demand dance makers of our time.

Ballet British Columbia, of which Pite was once a member, picked her 2012 piece Solo Echo as the fulcrum of its programme. A diaphanous curtain of light snow falls hypnotically at the back of a mostly dark stage to the plangent notes of a Brahms cello sonata.

The work is an elegy to winter, Tom Visser’s lighting breaking the gloom of a cold night with soft pools or narrow shafts of light. In the first part black-clad dancers move dreamily alone or in pairs, bodies low, arms stretching forward as if struggling to keep going in the unforgiving night . This section ends with a pas de deux of infinite yearning and tenderness, two bodies finding solace in each other and unwilling to let go.

In part two Pite demonstrates her unique ability to move groups of people on stage. Here she creates a deeply organic group out of seven dancers. They evolve together, now forming an undulating chain of bodies, now bending to lift a fallen comrade, togetherness meaning survival, until they finally break up and leave the stage one by one.

The first work of the evening, 16 + a room, bears the signature of the company’s Artistic Director, Emily Molnar, in collaboration with the dancers, and provides the company’s forceful and confident - almost boastful! - calling card. 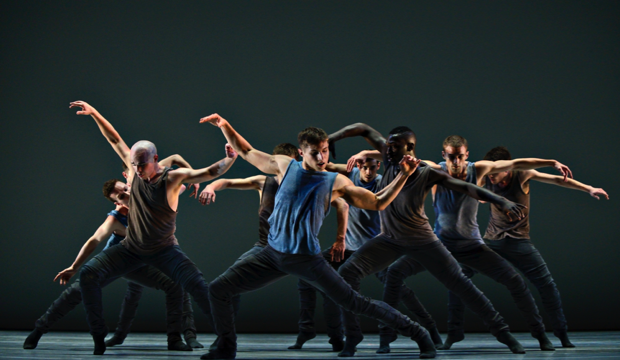 Ballet British Columbia, 16 + 1 room, photo Michael Slobodian
To pulsating electronic music by Dirk P Haubrich, seven men and six women give an assured demonstration of their solid contemporary technique, all core contractions and extensions, vertical jumps, fast runs and skids, much of it slightly off centre. For all that the women wear pointe shoes, the brash energy coursing through this abstract work is intensely masculine. It goes on a tad too long, but not so as to dull its impact.

The evening ends with Bill by Israeli choreographer Sharon Eyal in collaboration with Gai Behar. Sharon Eyal started choreographing for Israel’s Batsheva Dance Company; but over the past few years has been gaining a foothold in a growing number of international companies, and it’s not hard to see why.

Bill is a mesmerising ensemble work for the entire company. Dressed in pale body stockings that so define their figures as to give the occasional impression of nudity, the dancers perform a syncopated, intricate, highly synchronised and entirely gender-free choreography on an original score by Ori Lichtik, that seeks its inspiration in jazz and Brazilian themes before evolving into something less identifiable. 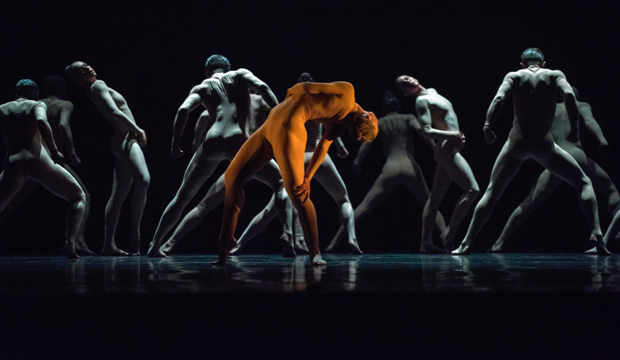 Ballet British Columbia, Bill, photo Chris Randle
Bill is also an abstract work, but is often reminiscent of ritual, at times of a collective trance. As it ends, two groups of six dancers each provide a jerky, long-slung backdrop for a forward group of five, their more fluid movements reaching upwards, they in turn framing a single individual separate from the group.

Ballet British Columbia had been to Britain before, but not to London. On this debut showing, we’d say they’d be more than welcome to return - we would certainly like to see a lot more from this company! 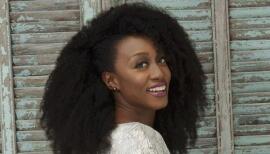