Mark Bruce’s adaptation of Shakespeare’s Macbeth, now showing in the unique space of Wilton’s Music Hall, is disturbing and exhilarating in equal measure

His Macbeth follows the action as laid out by Shakespeare, but concentrates it even more in a sequence of scenes held together by almost unbearable tension. Lighting flashes tear the backcloth even as the audience take their seats, thus immediately establishing a mood of uneasy expectation.

As the lights go up in what remains at all times a twilit stage, they reveal the three witches, young women in short dresses and silver feathery masks. They stroll slowly downstage, eyes fixed on the audience, arms performing coordinated ritual gestures. At first just otherworldly and mysterious, their presence soon comes to embody the menace of evil. 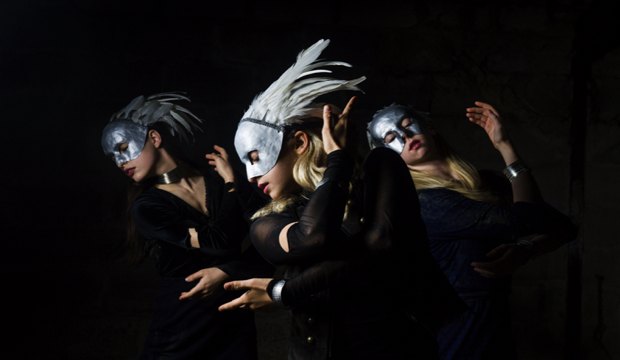 Mark Bruce Company, Macbeth, dancers Carina Howard, Hannah McGlashon, Daisy West
And then we meet Macbeth, danced by the exceptional Jonathan Goddard. A slight, yet compelling stage presence and a neat, precise dancer, Goddard is one of his generation’s most powerful dance actors. His dark suited Macbeth is an ambitious, though weak character, given to much anguished wavering, but with enough moral ambiguity to prefigure his descent into the deepest reaches of human depravity.

Together Goddard and Duval give a mesmerising portrayal of the Macbeths’ intricate relationship. The intense sexual charge of their initial duet takes your breath away; deep love and complicity add to the combustible mixture. Goddard is an accomplished partner to Duval’s reckless and ruthless Lady Macbeth in an expressive choreography that mixes soft, pliant embraces with fierce, stiff confrontational engagements. The balance of power between the two shifts constantly, but always ends up in Lady Macbeth’s favour.

We don't witness the actual murder of King Duncan by Macbeth, but rather its graphic enactment by Lady Macbeth, as she leans over the unsuspecting sleeping body, large hunting knife in hand, in a scene of irresistible incitement scarier than the actual deed.

In a performance that hurtles towards its horrifying, yet inevitable finale at a pace that makes it feel much shorter than its 90 minutes, Mark Bruce uses a score made up mostly of works by the Estonian composer Arvo Pärt. Pärt’s religious compositions establish an otherworldly climate, a yearning for heaven even as the characters descend into hell. Harsh electronic sounds occasionally break the mood and jolt the audience, as do blood-curling screams at key points, such as the discovery of Duncan's bloodied corpse.

Mark Bruce is well served by the versatility of his nine dancers, seven of whom double in named roles and minor parts. Phil Eddolls’ set suggests a dark interior separated from a just intuited town outside by a barely there castle wall, from which emerge those who will bring about Macbeth’s violent end. 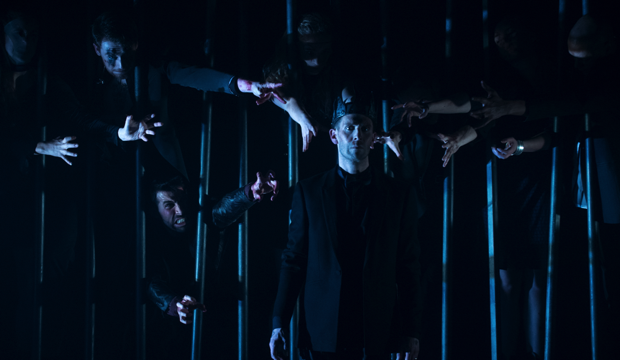 Mark Bruce Company, Macbeth, Jonathan Goddard and company
However, one of the undoubted stars of this show is Guy Hoare's lighting design. In a fixed stage with no proscenium or curtain, all scene changes are created by his skilled lighting, intense blackouts acting as dividers. Hoare’s subdued, yet varied lighting design creates just the right mood for each scene.

In his programme notes Mark Bruce writes: '… the Macbeths are everywhere in every age, because they are a part of us.'

In a world where we seek relevance even where it doesn’t exist, it’s a measure of Mark Bruce’s artistry that his Macbeth feels profoundly modern and sends his audience into the night a little wiser and humbler, as well as exhilarated. 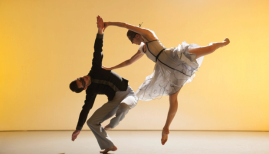 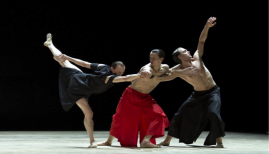