You can see how this tale of fatal attraction amid the political machinations of a weak and corrupt court would appeal to the choreographer Kenneth MacMillan. Always fascinated by the dark depths of the human soul and the tragedies they engender, MacMillan created some of the Royal Ballet’s most unforgettable works, among them Romeo and Juliet, and Manon.

Many consider Mayerling MacMillan’s masterpiece. With his genius for portraying complex events and feelings in eloquent and often extremely graphic choreography, MacMillan plunges his audience right into the Habsburg court, with its opulence, political intrigue and sexual excess.

Owning the stage in one of the most demanding roles for any male dancer is the unhappy and deranged drug addict Prince Rudolf. Over the years this role has been inhabited by some of the Royal Ballet’s best dance actors.

The version to be shown by the BBC stars Royal Ballet Principals Steven McRae as Rudolf and Sarah Lamb as Baroness Maria Vetsera. McRae is possessed of a spectacular technique with acting ability to match; Sarah Lamb is a superb dancer, bringing to the role of the besotted young mistress the requisite mix of frailty and recklessness.

Set to music by Franz Liszt, and with sumptuous fin-de-siècle designs by Nicholas Georgiades, Mayerling is very much a company ballet, offering a series of meaty soloist roles for both male and female dancers, as well as many set pieces for the corps de ballet.

We can’t think of a better way to spend an evening in self-isolation... 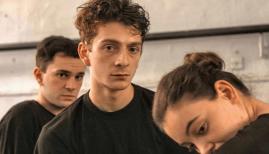 And Then We Danced review