The Royal Opera House has been building up a veritable treasure trove of key performances from its extensive repertoire of opera and ballet. To date more than 50 works have been made available to download, alongside a variety of behind-the-scenes videos.

Now three key ballets are to be added to the collection in the first three months of 2023, with more promised later in the year.

The first Royal Ballet work to enter The Royal Opera House Stream will be The Cellist (pictured top), which becomes available from Thursday 5 January onwards. A special commission from the prolific choreographer Cathy Marston, who specialises in narrative works, The Cellist is an homage to the prodigious cellist Jacqueline du Pré, whose career was cruelly cut short by the onset of multiple sclerosis at the age of 28.

Next, and just in time for Valentine's Day on Tuesday 14 February, comes Kenneth MacMillan's Romeo and Juliet, set to Prokofiev's eloquent score. One of MacMillan's most involving works, a masterful and passionate account of the doomed affair between the young lovers of Verona, it was first performed by the legendary partnership of Rudolf Nureyev and Margot Fonteyn, but every generation since has sought to leave its own mark on the two emblematic roles.

In this clip, the balcony pas de deux is performed by current Royal Ballet principals Matthew Ball and Yasmine Naghdi.

A staple of The Royal Ballet repertoire, Romeo and Juliet was last performed at Covent Garden a year ago. Click here for Culture Whisper's review.

Thursday March 9 sees the arrival of Frederick Ashton's 1952 Sylvia, choreographed on a delightful Delibes score. Set in mythical antiquity, the title character is a huntress nymph dedicated to the goddess Diana, who is loved by the shepherd-boy Aminta. The Greek god of love, Eros, puts in an appearance, as does the evil hunter Orion, who also covets Sylvia. 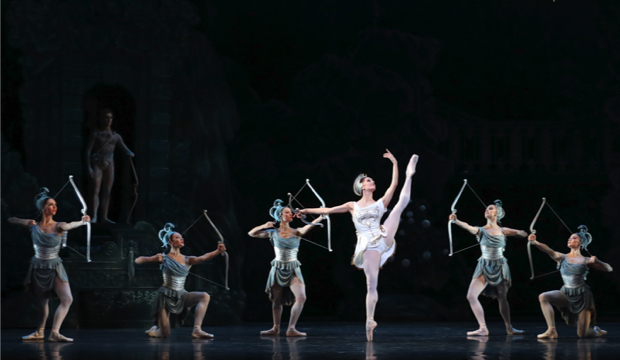 Production image of Sylvia. The Royal Ballet © 2017 ROH. Photo: Alice Pennefather
In the 2005 recording to be made available to stream the lead roles of Sylvia and Aminta are danced by Darcey Bussell (who surely needs no introduction!) and the Italian principal dancer Robert Bolle.

We'll be updating your coverage as more ballets are announced – watch this space!