Christopher Wheeldon’s The Winter’s Tale, hailed as the Royal Ballet’s first classic of the 21st century, returns to the Royal Opera House stage this Winter.

TRY CULTURE WHISPER
Receive free tickets & insider tips to unlock the best of London — direct to your inbox
Leontes, King of Sicilia, overcome by paranoid jealousy believes his wife Hermione to have become pregnant by his best friend, Polixenes, King of Bohemia. The friendship ruptures, Leontes orders the baby girl to be "disappeared," and Hermione is presumed dead of grief.
The courtier charged with disposing of the baby can’t quite bring himself to kill her, so he abandons her in a country across the sea that turns out to be Bohemia. She’s found by a shepherd, named Perdita (the lost one), and brought up by him.

Act 2 takes place 16 years later in Bohemia. Perdita, now a beautiful girl, is madly in love with a boy she assumes to be a simple peasant, but is in fact Prince Florizel, the son of Polixenes.

Daddy doesn’t approve of the match, the young lovers run away and end up in Sicilia, where they throw themselves at the mercy of Leontes. There Perdita is identified by a necklace left with her as a baby; marriage between two social equals is now possible; Leontes and Polixenes reconcile, and to bring matters to a really happy conclusion, Hermione, who was not dead after all, returns and forgives her husband.

There is a lot of psychological drama in all this, and Wheeldon’s choreography deftly illustrates it. Leontes’ scenes of almost mad jealousy in Act 1 are graphically physical and as interpreted by the incomparable Edward Watson, again leading the first cast, almost gothic in their agonising intensity.

By contrast, the choreography for the young lovers, Sarah Lamb and Stephen McRae in the first cast, is sunny and full of the innocent exuberance of first love. They are joyfully framed by a peasant ensemble whose dances are inspired by the folklore of Central Europe.
Wheeldon is backed by a superb team: music is by composer Joby Talbot, who’d already provided the score for the choreographer’s previous narrative ballet, Alice in Wonderland.

Designs are by Bob Crowley – moving from the stony and dark interior of Leontes’ court to the sunny, gloriously colourful and fertile countryside of Bohemia. When the curtain goes up for Act 2 revealing centre stage a glittering tree like no other, an audible “ahhhh” goes up from the dazzled audience.

And watch out for Crowley and Wheeldon’s subtle but hugely effective interpretation of Shakespeare’s stage direction, “exit pursued by a bear.”

A number of casts will have the chance to prove themselves in this seminal work; but still with the first cast, mention must be made of Lauren Cuthbertson, a loving, forgiving and lusciously danced Hermione.

If you don’t see any other ballets this coming Winter, Christpher Wheeldon’s The Winters’ Tale is definitely the one not to miss!

NOTE: The Winter's Tale will be relayed live to cinemas on 28 February. 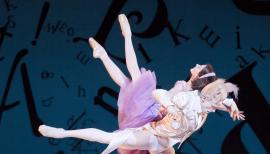