Birmingham Royal Ballet transform the Royal Albert Hall’s rather unforgiving stage into a magical set for its production of the Christmas favourite, The Nutcracker

On Birmingham Royal Ballet’s Friday evening performance the honours fell to the dazzling Jenna Roberts partnered by the supremely elegant Tyrone Singleton. Their initial pas before the solo variations was a miracle of assured technique, exemplary partnering and musicality. Only a heart of stone would have failed to be won over – and judging by the reaction of a packed Royal Albert Hall, there wasn’t a single heart of stone in the audience.

But we’re jumping ahead of ourselves. There had been much to enjoy before that final passage, not least the way in which BRB’s production had transformed the rather unpromising Royal Albert Hall stage into a magical set with the clever use of just a few props and some truly outstanding digital projections by 59 Productions.

The excellent orchestra was placed behind a low ornate gilt grid on a raised platform above the stage. Either side of it were two giant screens for the digital projections that transported dancers and audience to the ballet’s various settings.

Centre stage as the audience took their seats, much activity could be discerned inside a structure which might have been mistaken by Dr Who’s Tardis, but in reality was the workshop where Dr Drosselmeyer created his magical dolls.

The main aim of this particular Nutcracker, which is essentially Sir Peter Wright’s definitive production, is to make the narrative absolutely clear to the youngest members of the audience, as well as giving coherence to all the disparate variations of Act 2.

So, a narration voiced by actor Simon Callow with a thick cod-German accent has been introduced. It’s supposed to be the voice of Drosselmeyer, danced with flair by Iain McKay in one of his final performances before retirement from the stage; it guides us through the key points of the plot.

This is, of course, well known: a Christmas Eve party in the drawing room of the Stahlbaums, a bourgeois family living somewhere in 19th century Germany. Much fun is had by all, including the tale's protagonist: Drosselmeyer’s god-daughter, Clara – a child on the verge of adolescence, danced with a beguiling combination of innocence and budding knowingness by the delicate Laura Day.

Drosselemeyer’s present to Clara is the eponymous Nutcracker. She falls in love with her doll, who in her dream turns into a charming prince (Aitor Galende). After he leads the soldiers to victory over the scary rat army (with a little help from Clara herself), the pair are whisked to a magical winter wonderland by Drosselmeyer.

This is where the projections come into their own: in the original production through a trick of stagecraft Drosselmeyer makes the Stahlbaums’ Christmas tree magically grow and grow before our very eyes, symbolising the transition from the real world to the world of magic and dreams.

In the Albert Hall that’s not possible, so as the actual tree is discreetly wheeled off stage, an ever-growing Christmas tree is projected onto the giant screens with mesmerising colour and definition. It appears to envelop us. It's an "ahhh" moment that really does work.

As does the image of naked frosty trees in a moonlit forest, the set for the Dance of the Snowflakes that brings Act 1 to an end, as flakes of fake snow falls gently onto the stage and the first rows of the RAH arena.

Another clever moment comes at the very end when all the variations – Harlequin and Columbine, Arab Dancers, Chinese Dancers, Mirlitons, Russian Dancers – freeze in unnatural poses as the lights go down, indicating that they were all dolls from Drosselmeyer’s workshop brought to life in Clara’s own dream. That, too, works beautifully.

BRB’s corps and soloists danced with commitment and gusto, the odd lapse surely to be forgiven bearing in mind the superhuman demands The Nutcracker’s intensive season makes on performers.

In short, BRB’s The Nutcracker is a production to be commended and enjoyed, and we can only hope BRB will be moved to return it to London, as it more than holds its own when compared with the Royal Ballet's and English National Ballet's. 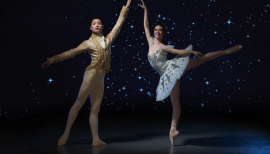