10 CW readers are interested
The Royal Opera House streams Giselle 5 The Royal Opera House streams Giselle Teresa Guerreiro
Giselle will be streamed on Friday 3 December 2021, 19:30 – 21:45 (performed on Saturday 20 November), as part of the ROH Autumn streaming programme. Available for a month. Cast: Yasmine Naghdi as Giselle, Matthew Ball as Albrecht, Marianela Nuñez as Myrtha.
Tickets: £16
To access the ROH streaming platform click here
Below is CW's ★★★★★ review of the first night of the current run
Let’s be absolutely clear: Natalia Osipova’s Giselle Act II simply cannot be bettered. As the spirit of the dead and betrayed peasant girl Giselle, she is ethereal, no longer human, almost feral, until in a brief reunion with her lover Albrecht she recaptures her humanity for just long enough to forgive and save him from the vengeful wilis.

In the eerie, monochromatic, moonlit, mist-enveloped forest where Giselle’s grave lies, Osipova uses her exceptional elevation to convey weightlessness, an impression reinforced by arms that unfold softly like wings, and feet that bourrée as if she’s floating above the ground.

As she gradually gains corporality so that she can meet the repentant Albrecht one last time, her body melds into his and yet at the same time it conveys the pull of what she’s about to become: pure spirit, devoid of all humanity like her sister wilis.

It’s an unforgettable performance that burrows straight into your heart; and in Reece Clarke, debuting in the role of Albrecht, Osipova has picked a remarkable partner. 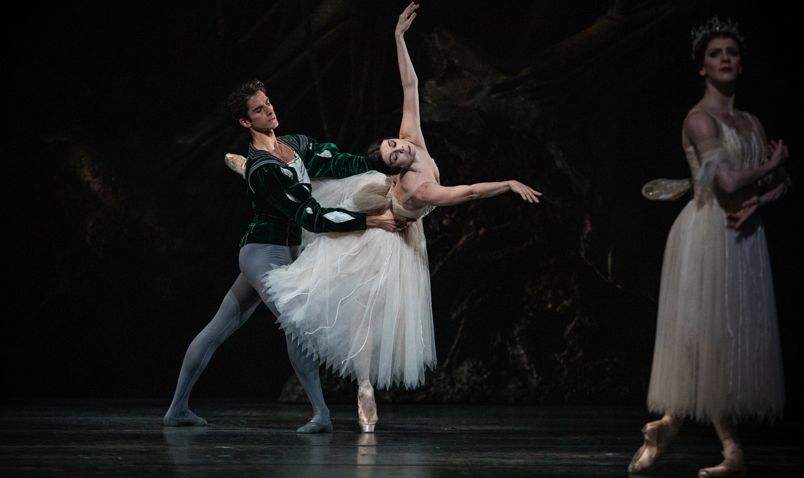 His tour-de-force dancing as commanded by the Queen of the Wilis took your breath away, his long sequence of entrechats so sustained and perfect it earned its own enthusiastic applause.

Albrecht’s entrance into a sunlit farming village gets Act I going. As Clarke sets the scene with the clearest of mimes, there's a predatory glint in his eye, the dashing nobleman who’s out for a bit of harmless fun with a pretty peasant girl. So meticulous is his characterisation we immediately know that Reece Clarke is making Albrecht very much his own.

Osipova’s Act I Giselle is perhaps not so indisputable as her Act II reading of the character. She dances Giselle as a boisterous young girl, feverishly burning with young love, seemingly bursting with life, yet already sensing intimations of death. There's a touch of excess in all her gestures, and at times her dazzling speed cuts across the music. Clarke’s initially callow Albrecht is humanised by her intense adoration. They dance together as true lovers, which makes the revelation of his betrayal, leading to her mad scene, utterly devastating.

The Royal Ballet brings this atmospheric Peter Wright production intensely to life, with glorious designs by John Macfarlane, the massed ranks of wilis in the white Act II impressive in their beautifully coordinated ensemble dancing, just as the corps and soloists in Act I tackle their jollly choreography with joy and aplomb.

As Myrtha, Queen of the Wilis, newly minted principal Mayara Magri showed the required technical prowess, but her interpretation was surprisingly under-characterised – you never sensed the character’s absolute authority and cold implacability.

No matter: the night belonged to the perfect, vital partnership of Osipova and Clarke who made this a Giselle to remember..