This is what the Russian ballerina Natalia Osipova, currently on contract to The Royal Ballet, has been doing over the past few years with a series of personal projects designed to stretch her and show new facets of her talent.

Following two self-curated bills which attracted lukewarm critical response, in 2019 she brought in the choreographer Arthur Pita to create The Mother, a nightmarish work in which Osipova danced a woman prepared to go through the most harrowing of trials to wrest her baby from death's grip.

And now Carmen. Or rather a double-take on the story of Carmen, in which Osipova dances both an actress and the character of Carmen in a filmed production of one of the most enduring tales of the Western cultural canon.

Choreographed by the prolific dance-maker Didy Veldman, Carmen seeks the essence of the story of the recklessly passionate, freedom-loving gipsy by narrowing it down to its central characters, all of whom play dual roles. The choreographer also draws parallels between the lives of the characters and those of the performers playing them.

As was to be expected in a work commissioned by Osipova, everything is centred on her. She is joined on stage by English National Ballet lead principal Isaac Hernández as the film director and the bullfighter Escamillo, Osipova’s fiancé Jason Kittelberger as the actor playing Don José, Hannah Ekholm as the actor playing Michaela and Eryck Brahmania as the cameraman. 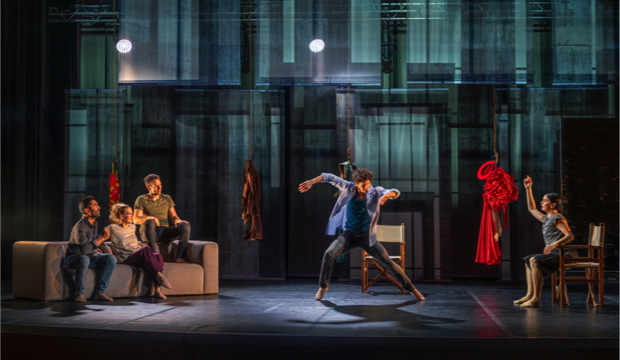 Carmen. Photo: Annabel Moeller
We see this crew alternately in the studio between takes, and filming various scenes of the life of Carmen. As the character Carmen, Osipova has a series of athletic pas de deux with her two leading men, Escamillo and Don José, but in neither case does the character’s intense sensuality shine through.

As the performer Osipova comes across as a little flirt, whose dalliances with the various men in the crew become gradually more disruptive and lead to a tragic denouement that parallels the fictional story of Carmen. There is no character build-up – we learn nothing about this woman, nor does she develop throughout the work’s 90 minutes’ duration.

There’s no faulting Osipova’s dancing, nor indeed that of her fellow cast members, Kittelberger as a contemporary dancer being particularly at ease with Veldman’s style of movement. But Osipova’s acting is erratic, and as the performer she offers unconvincing posturing rather than acting.

Given that over the years Carmen has inspired a never-ending series of treatments, almost to the point of cliché, it has to be asked whether this new piece brings anything new or worthwhile to the canon. I would suggest not.

The one highlight is Dave Price’s musical score, inspired by Bizet's famous score, snatches of which it uses to great effect, blended with original jazz-infused and lushly orchestrated music.