Swan Lake is a case in point. Since its beginnings on the ballet stage of 19th century Russia, the story of the sad prince who finds love with a swan-woman only to lose her again has been treated, overhauled and recreated by many choreographers, film makers and theatre directors.

None, however, has given it the gritty intensity of Ireland’s Michael Keegan-Dolan, whose Swan Lake is back at Sadler’s Wells following a triumphant run in 2016.

No longer a traditional ballet created on Tchaikovsky’s glorious score, this Swan Lake – Loch na hEala in its original Irish language – is a piece of dance-theatre for three musicians and 10 performers, that takes the barebones of the story and transposes it to the deprived Irish Midlands.

As the audience file into the theatre, the stage is a derelict set of old plastic, metal ladders, the odd chair. In the middle a man, stripped down to his underpants and tethered,bleats like a goat trying ever more desperately to free himself. In one corner an old woman sits in a wheelchair. In the opposite corner a young man in a black tracksuit and beanie sits hunched, his face devoid of all expression.

The young man is Jimmy O’Reilly, who’s unemployed and clinically depressed. The woman is his daunting mother Nancy, determined to find him a wife because, she says, 'his father is dead, a year has passed, and he can’t cope with the loss.'

Traditional Irish music played on fiddle, cello and nyckelharpa blends with the spoken word to flesh out the story. Jimmy goes to the the local lake to kill himself; there he meets a woman who, along with her three sisters, was turned into a swan to stop her revealing sexual abuse by the local priest.

Their encounter is possessed of a heart-breaking tenderness and need, dancers Alexander Leonhartsberger and Rachel Poirier clinging to each other as if their lives depended on it – which, of course, they do.

This is a work where poignant and grotesque are never too far apart and often overlap; where earthy and sublime go hand in hand.

There is no happy ending – both the swan woman and her lover die, just like most of the princes and swan-princesses before them – but there is a life-enhancing finale of extraordinary beauty and power.

The winner of Best Production at the Irish Times Theatre Awards, Loch na hEala is an unmissable dance-theatre experience, provided you're prepared to abandon your expectations of a sedate ballet classic and engage with an overwhelming and ultimately cathartic ride. 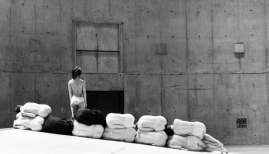