Review: Matthew Bourne, The Midnight Bell 4 Review: Matthew Bourne, The Midnight Bell Teresa Guerreiro
The moment you take your seat at Sadler’s Wells you’re transported to another time, another place. The stupendous set by Matthew Bourne’s longtime collaborator Lez Brotherston transforms the stage into the louche, foggy Soho of the 1930s, where scant street lamps give out yellowish light, and cheap hotel neon signs flash intermittently. The buildings are sooty, house windows plunged in darkness.

Onto this set with The Midnight Bell pub as its focus 10 forlorn characters converge, whose broad outline description in the programme – a waiter, a young prostitute, a cad, a West End chorus boy and so on – Bourne fully fleshes out through expert characterisation and vivid choreography, so that we very quickly feel we know them and become engaged with their fate.

Bourne found his inspiration in the works of Patrick Hamilton, whose novels and plays document the street life of inter-war London. In Bourne's words, 'Patrick Hamilton’s literary world could be seen as the flip-side of his close contemporary, Noël Coward, whose witty and glamorous world of cocktails and high society made him so fashionable and successful. Hamilton, on the other hand, wrote about the lives of everyday people, full of pathos, comedy and thwarted romance.'

The latter are very much Bourne’s people, and in The Midnight Bell the choreographer brought to life characters from a number of Hamilton works, cogently interpreted by his remarkable dancers.

Tall, willowy, primly dressed and wistful Michela Meazza is Miss Roach, a spinster, whose loneliness oozes from the stage to lodge itself in our hearts. She takes up with Ernest Ralph Gorse, a cad, unctuously brought to life by Glenn Graham, and together they have a joyless coupling in a seedy hotel room, where he steals her money.

Innocent and starry-eyed waiter Bob (Paris Fitzpatrick) hungers after the young prostitute Jenny Maple (Bryony Wood), who has no time for non-transactional love; and when they eventually come together it’s uncertain whether that’s reality or a figment of Bob’s imagination. 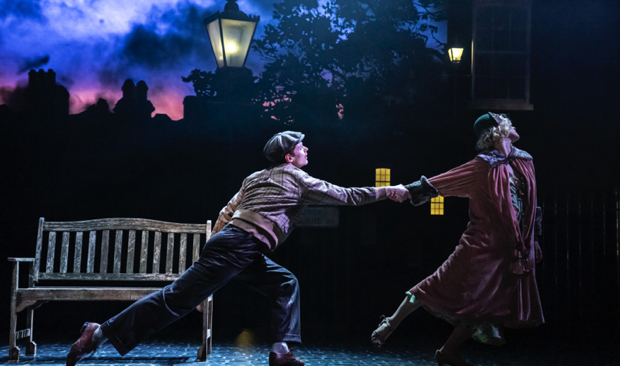 Most touching is the encounter between West-End Chorus Boy Albert (Liam Mower, superb) and new customer Frank (Andrew Monaghan). What starts as a furtive, rushed, though intense encounter at a time when homosexuality was a crime punishable by imprisonment, develops after a startling plot twist into a moving love affair, the two men last seen in The Midnight Bell tentatively holding hands under the table.

Terry Davies’s original score, interspersed with period songs, lip-synched by the dancers to brilliant effect, is deeply atmospheric and drives the action along; Paule Constable’s lighting perfectly dresses each scene.

With touches of mischievous humour lifting the gloom, The Midnight Bell is Matthew Bourne’s best work in a while. If anything, some of the pacing in Act I is slightly off, with slow stretches where the action sags just a little; but Act II simply could not be improved.