Frederick Ashton’s sunniest ballet, La Fille Mal Gardée (The Wayward Daughter) is set in an idyllic country village, where the fields are fecund, the peasants jolly, and love – of course! – wins the day, even if it requires stealth and resourcefulness to get there.

Ashton, the quintessential Englishman wrote, a apropos La Fille Mal Gardée, ‘there exists in my imagination a life in the country of eternally late spring, a leafy pastorale of perpetual sunshine and the humming of bees (…) luminous and calm.’

That, in a nutshell, is the setting for this ballet. Lise, daughter of the prosperous landowner Widow Simone, loves Colas, a handsome but penniless villager. Widow Simone, however, has other plans for her wayward daughter and wants to marry her off to Alain, the simpleton son of a rich neighbour.

La Fille Mal Gardée is crammed full of scrumptious roles. Lise is sunny and loving, but cheeky and wily; much as she loves her mother, she will do what it takes to get her man. On press night, BRB Principal Momoko Hirata, was a convincing Lise. Though not the most musical of all dancers, Hirata is technically assured, light, vivacious and very expressive. The Act III scene where, thinking herself alone at home, she mimes her hopes for the future – a loving marriage, bringing up three children – is utterly engaging.

She is well partnered by the very handsome, if slightly one-tone Mathias Dingman as lover boy Colas. He, too, is convincing in his love for Lise and shows off his technical prowess with some aplomb.

Alain is a simpleton, but not an object of cruel mockery. His interpreter must find the humanity in him, the mix of simple-minded incomprehension and pleasure at the gentle teasing of those around him; and that BRB soloist James Barton does, while performing some truly intricate choreography, dotted with devilish pratfalls.

Which brings us to Widow Simone. Ashton’s homage to the great music hall dame tradition, Widow Simone is always danced by a man en travestie. The role must tread a very fine, tricky line between comedy and farce; and Michael O’Hare seemed at first to stray into the latter, though he eventually hit the right tone.

The ballet’s sheer vibrancy and happy mood disguises some fiendish choreography and the company – plaudits to the corps! – acquit themselves remarkably well, in what is one of the staples of BRB’s repertoire.

Oh, and did I mention Peregrine? The ballet requires a live pony to pull a cart that will take Lise and her mother to a picnic. For quite some time now the role has been performed with almost impeccable professionalism by pony-actor Peregrine, who ‘stars’ in both the BRB's and the Royal Ballet’s production, and never fails to elicit a delighted ‘aahhh’ from both La Fille veterans and newbies in the audience.

In short, BRB’s La Fille Mal Gardée sends you home happy and carefree, oblivious of the winter closing in and momentarily enveloped in that perpetual late spring. 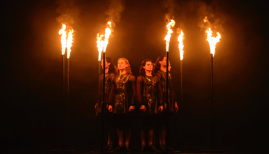 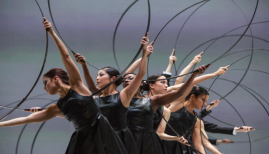 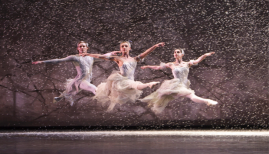