Birmingham Royal Ballet visits Sadler's Wells with Into the Music, a triple bill of works that show particular responses to their chosen musical scores

The programme’s umbrella title, Into the Music, points to the theme of the evening: works that present a specific response to the musical scores chosen by the choreographers.

Kylián gets the evening under way with Forgotten Land, set to Benjamin Britten’s Sinfonia da Requiem Op 20 (pictured top). Built around six colour-coded couples, the work is danced against the background of a massive seascape painted by the designer John Macfarlane.

Intended as a metaphor for the rhythms of life, the sea is the work’s leitmotiv, and its perpetual ebb and flow is reflected in the dancers’ restless movements, arms like waves, flowing lifts, dancers in soft shoes covering the entire stage in expansive split jetés.

Each couple has its own specific accent, the black couple wistful, the grey more boisterous, the red ballerina like a fleet tongue of fire. Although often on stage together, each dominates a different movement of Britten’s score. It’s a very accomplished, very Kylián work.

Every hotel that features in our collective cultural landscape – think Hotel California, Hotel Budapest, California Suite (feel free to add your own) – finds its way into Morgann Runacre-Temple’s Hotel. 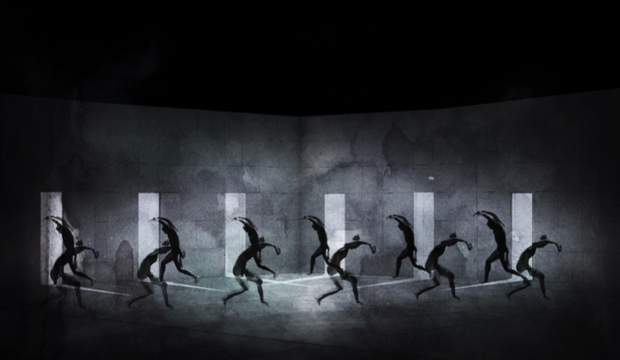 It doesn’t tell us anything new about the contrasts between hotels’ public and private areas, but its format, with the extensive use of film, pushes the relationship between dance and film a little bit further..

Working with her regular collaborator Jessica Wright (collectively known as Jess and Morgs), Runacre-Temple has placed two live cameras on stage, and also uses recorded film, with the images projected onto a set of two grey walls placed at an angle (stage design Sami Fendall). In fact, grey is very much the tone of this piece.

Sometimes the film shows us what’s going on in the bedrooms, sometimes the live camera closes in on the faces of the characters.

The first part, introducing the staff, provides some energetic contemporary dancing to Mikael Karlsson’s loud, jazz-inflected score; in the second part we move into surreal territory, the guests' own nightmares. 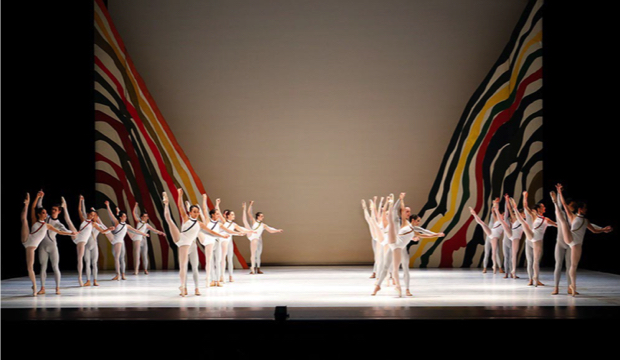 Birmingham Royal Ballet, The Seventh Symphony © Zenna
Beethoven’s piece was described by Wagner as ‘the apotheosis of dance’ and you'd have thought no choreography could possibly add to it, but Scholz’s The Seventh Symphony makes a decent fist of translating its glorious music into steps.

Scholz’s designs are inspired by Morris Louis’s colourful line paintings; the dancers are clad in pristine white leotards with a fine different coloured diagonal ribbons across the torso.

The whole thing is an exercise in clean academic dancing; as such it’s unforgiving of even the slightest hesitation on the part of the dancers. But BRB's massed ranks, soloists and ensemble alike, danced with joy and vitality, lifting our spirits after the dour goings-on in the Hotel.