He is also a maverick for whom rules exist merely to be broken in his quest for a contemporary, avant garde form of flamenco. Consequently his shows are an unpredictable combination of hits and misses.

Galván’s La Consagración de la Primavera is definitely a hit – a glorious, mesmerising creation. Like so many choreographers before him, Galván has succumbed to the lure of Igor Stravinsky’s The Rite of Spring, whose brash dissonances and violent primal beats intended to picture the sudden eruption of spring in his native Russia and its attendant pagan fertility rites, caused a near riot at its 1913 Paris premiere.

Over the past couple of years or so, Sadler’s Wells has brought us no less than six readings of Stravinsky's iconoclastic score, including Pina Bausch’s totemic telluric version. More are scheduled for next year, but none has so far distilled and interrogated a century of Western culture so cogently as Israel Galván’s.

The stage is littered with a variety of platforms, some wired for sound, providing different textures – from the traditional flamenco tablao to gritty earth or metallic clangs – to Galván's wandering zapateado.

The music comes from two grand pianos placed stage right, played by Daria van den Bercken and Gerard Bouwhuis, and as well as Stravinsky’s The Rite of Spring it includes Frederic Rzeweski’s Winnsboro Cotton Mill Blues, itself as overpowering as Stravinsky’s Rite. A short interlude of serenity is brought in by Scarlatti’s Sonata K87.

Galván takes to the stage, an androgynous figure in black shorts and long shirt, one leg encased in a black nylon knee sock, white ankle boots. As he starts dancing, his feet dialogue with the piano, and his arms, deconstructing traditional flamenco gestures, suggest the wings of a frenzied bird, as if Stravinsky’s Firebird had strayed into a different score.

At times, feet turned in and angular arms semi-raised, he evokes iconic images of Nijinsky, whose radically new choreography for The Rite of Spring was vilified along with Stravinsky’s score.

At other times, Galván’s gender-questioning movement, slowly crossing the stage in a long black skirt, is reminiscent of the mid-20th century dancer, actor and provocateur Lindsay Kemp. 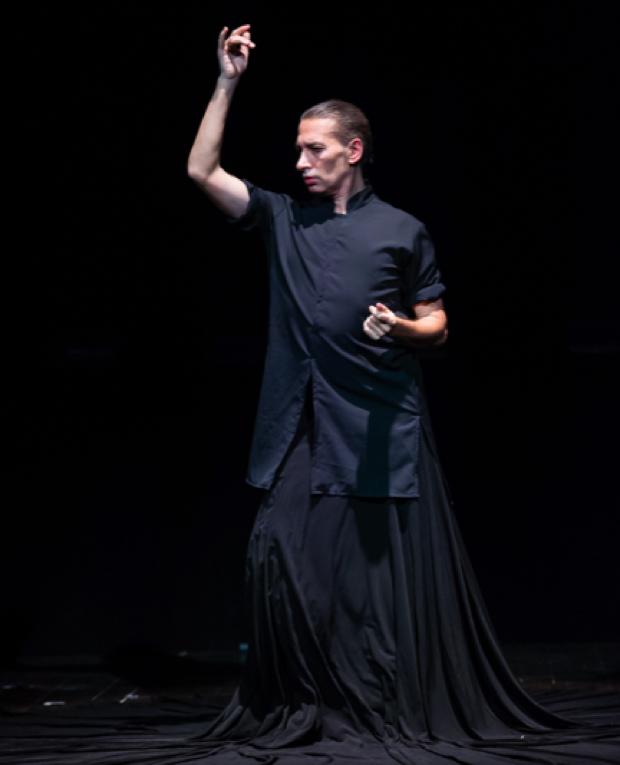 And as he launches into The Rite of Spring proper, his long skirt pooling at his feet, he somehow creates the physical illusion of an earthquake, its rumbling waves spreading from stage to theatre and lodging in your sternum.

It’s a powerful coup de théâtre, the core of an extraordinary work by a truly original and engaging artist, whose aim to drag flamenco into the 21st century and extend its possibilities is fully realised in his exhilarating La Consagración de la Primavera.