2 CW readers are interested
English National Ballet: Ek, Forsythe, Quagebeur Review 4 English National Ballet: Ek, Forsythe, Quagebeur Review Teresa Guerreiro
Igor Stravinsky’s The Rite of Spring has proved an irresistible magnet to choreographers in the more than a century since its scandalous 1913 Paris premiere. Its brash dissonances and primal syncopations continue to suggest stories other than the original pagan rites surrounding the violent eruption of spring in the composer’s native Russia.

Now Mats Ek, the veteran Swedish choreographer who came back from retirement at 70 in order to do work he feels he ‘must’ do, has taken The Rite of Spring to tell a story about forced arranged marriages (pictured top).

The staging is stylish. Marie-Louise Ekman’s set is massive flat charcoal-grey profile of a house; her costumes, surely inspired by Japanese kimonos with straight lines and wide sleeves, are light pink silk, intended as the colour of flesh.

The choreography responds to the score with Ek’s signature steps: long strides with bent knees and flexed feet, vertical jumps with legs apart, expressionist arm movements, barely tamed energy coursing through it all.

During the first, softer section the mother walks on carrying a white bundle which she briefly puts on her bent back like a burden. It’s her daughter’s wedding dress, the gesture indicating that she, too, had an arranged marriage.

The daughter submits to wearing the dress, but her gestures suggest a hidden rebellion. The Father bounds in, all male authority, followed by a compliant Bridegroom.

When bride and groom are left alone, they engage in a tentative, jagged, moving courtship. The finale seems to indicate that together they’ve overcome stifling traditional pressures.

Ek’s The Rite of Spring was preceded by two completely different works.

William Forsythe’s Blake Works I, set to seven songs from James Blake’s album The Colour in Anything, opened the programme. 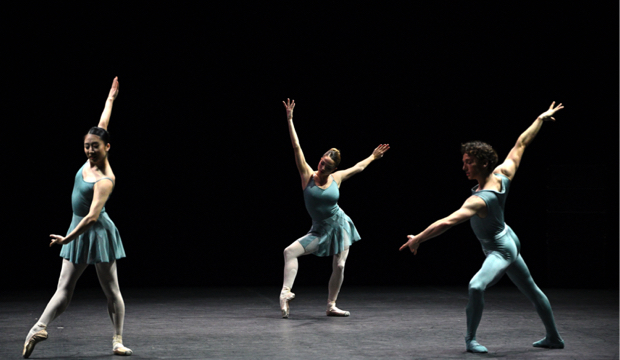 Haruhi Otani, Ivana Bueno and Noam Durand in Blake Works I by William Forsythe. Photo: © Laurent Liotardo
Playful and energetic, Blake Works I it makes plentiful use of Forsythe’s genius for creating interesting, fleeting groupings of dancers, and relies to a large extent on the men’s athleticism, though the women, too, are given satisfyingly sassy choreography.

Despite its fast-moving exuberance, there is a meditative tone to Blake Works I, responding to the poetic introspection of James Blake’s music and lyrics, the latter particularly poignant in the final duet to ‘f.o.r.e.v.e.r.’ beautifully danced by Emma Hawes and Aitor Arrieta. 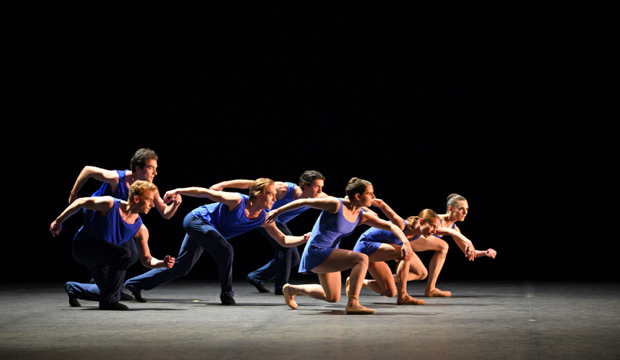 English National Ballet in Take Five Blues by Stina Quagebeur. Photo: © Laurent Liotardo
A piece for nine dancers created during lockdown, this is a very clever translation into dance of the spirit and manner of its jazz score. There’s often a feeling of improv to the movement, with the dancers watching each other and some picking up where others left off.

The steps are classical, but infused with a modern freshness, the dancers in their simple costumes in a range of blue tones lit by a series of hanging globes in what could be a 50s ballroom.

This was Tamara Rojo’s last programme as ENB director and she leaves behind a company in buoyant form with its very own, mostly very enjoyable repertoire.

The Colour in Anything