Works by The Royal Ballet’s founder choreographer Frederick Ashton and its youngest, Liam Scarlett – The Two Pigeons/Asphodel Meadows – make for a thrilling programme at the Royal Opera House

Nine years later, Liam Scarlett’s Asphodel Meadows remains as fresh as on its first night. Inspired by Greek mythology, where the Asphodel Meadows were a section of the underworld inhabited by the souls of the dead, it is an abstract ballet for 20 dancers with three lead couples, designed by ROH regular John Macfarlane and atmospherically lit by Jennifer Tipton.

Scarlett shows complete mastery of his ensemble, moving the corps in groups that dialogue with each other, the concerto’s multiple themes taken up by the three lead couples, dressed in dark tones that range from brown to deep purple and black, in striking contrast to the white clad corps.

All excelled, but special mention must be made of Laura Morera and William Bracewell in the slow middle movement. A perfect partnership, Morera and Bracewell infused their dancing with an intense sensuality, abandoning themselves to the music and each other. Towards the end of the movement there is a long moment where they face each other motionless, and it’s as if an electric current is running between them and overflowing into the audience. Truly remarkable.

In what was very much her night, Laura Morera returned as a ravishing Gypsy Girl who tempts The Young Man away from his painter’s garret and his girlfriend, The Young Girl, in Ashton’s The Two Pigeons. 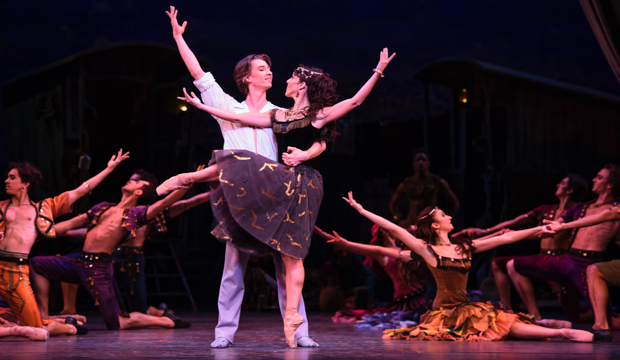 Created in 1961 on a score by André Messager based on a tale by La Fontaine, The Two Pigeons is set in bohemian Paris, where The Young Man is distracted from his innocent (and slightly silly) girlfriend by a band of sexy and exotic gypsies, the girls all hair and swirling colourful skirts, their men bare-chested and very butch…

Life with the gypsies having proved far from what The Young Man expected, he returned to the garret to be reconciled with The Young Girl.
Two real white pigeons punctuate the key points of the tale, flying on and off stage as required and inevitably melting the audiences hearts…

Truth to tell, The Two Pigeons is a rather sugary, faintly dated piece; yet Ashton’s choreography is a prodigy of comic story-telling, with its leitmotif of birds wings – hands on waist, elbows sticking out and moving rhythmically acquiring completely different tones in each of the three scenes: jolly fun between The Young Girl (Lauren Cuthberson in fine comic form) and her friends; mockery by the gypsies in the second scene; and the beating of a broken heart as The Young Girl alone mourns her lost love.

Watching Vadim Muntagirov dance is to have a crash course in the meaning of beauty. Tall, elegant and perfectly proportioned, he draws unforgettable lines with every movement, but is not always the most expressive of dance actors. Here, though, Muntagirov was a convincing Young Man, too easily seduced by the temptation of an exotic life, and suitably chastened upon his return to The Young Girl. 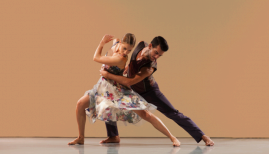