The second thing is the way in which they keep eye contact with the audience. ‘Look at me’, they seem to be saying, and you do, and never feel like looking away.

The dancers of ABT Studio Company may be young – this is a junior company for ages between 17 and 21 – but they bring all that and more to the stage, and you leave their programme at the Next Generation Festival feeling energised and exhilarated.

The programme is a mixed bill of contrasting works, all but three out of nine specially commissioned and designed to show the dancers’ talent, technical ability and versatility, and give each one of the 12 an opportunity to shine.

Kotomi Yamada and Jake Roxander certainly shone in two very different pas de deux: Stars and Stripes, from the eponymous Balanchine homage to his adopted land, which opened the programme, and Twyla Tharp’s Known by Heart Duet. The former uses purely classical language in a vibrant and humorous manner; the latter is full of Tharp’s delightful quirks in a tragicomic battle of the sexes.

The dancers excelled in both, but without taking anything away from Yamada, it was Jake Roxander who captivated, not only in these pas de deux, but throughout the evening. He is immensely charismatic with a jump that shows that rare ability of appearing to stop in mid-air for a split second. Roxander is surely destined for future stardom. 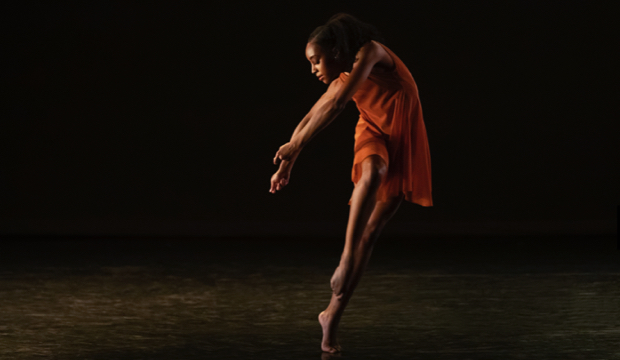 Aleisha Walker in Lora by Yannick Lebrun. Photo: Erin Baiano
Walker’s dancing has a maturity well beyond her years. No movement was rushed, her backbends slow and eloquent, the whole thing appearing to translate into dance one of the lines of the song: ‘I do this for the life, I do this for the passion.’ It was truly awesome.

Of the various ensemble pieces, the colourful La Folla Variations choreographed by Lauren Lovette, formerly a principal with New York City Ballet, brought all manner of interesting and unexpected combinations to the groupings of four couples with the men dressed in vibrant red, and the women in tutus ranging from purple to blue. The piece cleverly combined the baroque music of Francesco Geminiani, classical ballet vocabulary and a very contemporary freshness.

The programme ended with For What Is It All Worth? choreographed by Hope Boykin to music by Stephen Stills, a piece whose vitality reminded you all these dancers are children of the 21st century; a couple of sections looked like enjoyable collective jam sessions, albeit carefully choreographed to appear spontaneous.

The unique pizzazz of Broadway was never far away, and throughout ABT Studio Company brought us the raw energy we’ve come to expect from the best New York has to offer. Going to the ballet is a lot of fun – who knew?

For What Is It All Worth?