Brexit, language classes, and hearing in colour are all on the mind of the composer Roxanna Panufnik 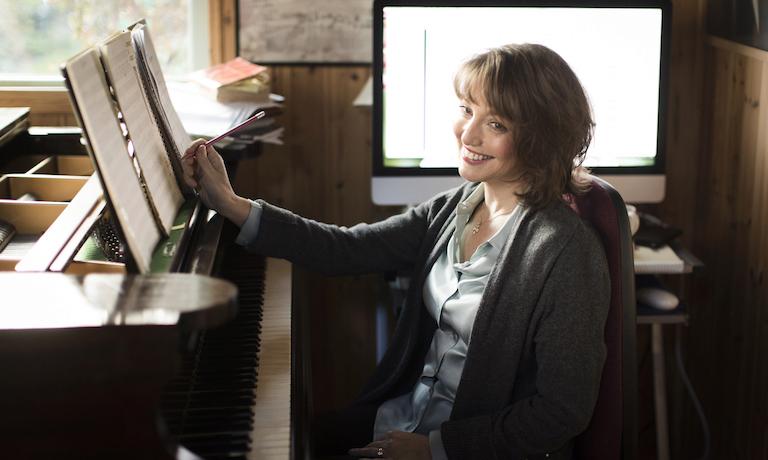 Roxanna Panufnik at work in her London home. Photo: Benjamin Ealovega
Music may be a universal language, but even composers like to learn another tongue too. That's why Roxanna Panufnik is, by her own admission, struggling with Polish, and for the second time. After a break while raising her three children, she has gone back to school, mostly alongside Londoners who have Polish partners. 'They're learning for love,' says Roxanna, clearly touched by the dedication of younger classmates.

It was her despair at the result of the EU referendum, coupled with her pride in her Polish-born father, also a composer, that led her to take Polish nationality last year. ‘I was so appalled by the EU referendum result. I don’t want to feel, or for my children to feel, that we’re just English. My husband is half French. We’re very much European and I very much want to continue to be part of Europe when this hideous thing happens. If it happens.'

All this will be music to the ears of Remainers, who are rightly worried about the future for international music-making if Brexit goes ahead. British Artists, and In the case of players, their instruments and kit, will not be able to move speedily and seamlessly across borders, which is vital for touring artists.

But there is other music on the mind of the composer at the moment. First up is a commission by the BBC to mark the centenary of the end of the First World War, to be premiered for The Last Night of the Proms (8 Sept), when the eyes and ears of the world are on London and the Royal Albert Hall.

In Songs of Darkness, Dreams of Light, two choirs sing different texts. The first, the 24-strong BBC Singers, have words of lament by the First World War poet Isaac Rosenberg. The larger forces of the BBC Symphony Chorus respond with more consoling words by Kahlil Gibran, author of the serene and globally popular poem The Prophet.

Then comes a new work commissioned by conductor Marin Alsop for her two orchestras, the Baltimore Symphony and the São Paulo. The piece has two time signatures at once, and so calls for two conductors, one beating four beats to the bar, the other five. The two strands meet from time to time. Alsop will be joined by the brilliant Italian conductor Valentina Peleggi.

Londoners can expect to see and hear a lot more of Peleggi soon: she is about to start work with English National Opera.

Roxanna draws from a limitless range of texts and musical styles in her work. 'I failed my English Literature O-level,' she says with a cheerfulness that will give heart to any family with less than wonderful GCSE news this month. But she remains close to her former teacher at the progressive Bedales School in Hampshire, and it was she who suggested Rosenberg's Into The Underworld, which seems to foresee trench warfare.

Roxanna has also incorporated music from several faiths, with help from an academic a friend at SOAS and a Lebanese priest... She regularly puts out appeals for expert advice on social media and trawls the internet in her hunt for musical originality.

Her father was Andrzej Panufnik, who fled his native Poland in the Fifties after falling foul of the then regime. He found a welcoming home in Britain, where Roxanna was born. Although she resented being dubbed Little Panufnik as a student at the Royal Academy of Music, now with a style and reputation of her own she bears her name with pride.

The musical gene has passed down to all three of her children. A 16-year-old daughter is in the church choir with Roxanna, who loves to sing but describes her own voice as ‘a mouse squeak’. At 14, her other daughter is developing as a singer-songwriter. A son of 12 is a senior chorister at Westminster Abbey and ‘has the musical gene in a big way’.

All three have grown up in an elegant Victorian house in south-west London, handy for parks and open spaces, but also for London’s premier concert halls. At the bottom of the garden Roxanna composes in a chalet plastered with posters for concerts that have featured her work, and in the way of a 21st-century composer, computers are as prominent in this cheerful space as the grand piano at which she composes.

The bright surroundings are befitting of a musician whose work is literally coloured by the condition known as synaesthesia. It means that musical notes manifest themselves to her as colours. C is white, A is bright red, D is blue. I wonder if it works the other way round? Can she ‘hear’ a painting by, for example, Kandinsky, who himself wanted to create on canvas some of the glowing colours of the orchestra? No, it is a one-way process. However, these sound colours can also blend, like pigments on a palette, so that D flat major is purple-ish: the ‘colour’ of a new piece will help Roxanna decide what key it will be in.

Meanwhile that other language, Polish, is demanding attention. On a bookshelf in the chalet is a copy of 301 Polish verbs, which brings us to her evening classes. After terrible experiences in his home country, once settled in Britain her father was keen to adopt English, so in her 20s she snuck off to the lessons on her own.

‘I was learning in secret and wanted to surprise him by suddenly speaking Polish, but sadly he got very ill and died before I was ready.

'But it’s so hard! There are seven cases!’

Roxanna Panufnik’s 'Songs of Darkness, Dreams of Light' receives its world premiere at the Last Night of the Proms, Sat 8 Sept. Click here for more details. Her album 'Celestial Bird' is released the day before.