The Souvenir won the Grand Jury Prize at the 2019 Sundance Film Festival and played at the 2019 Berlinale.

At a house party in the 1980s, the Psychedelic Furs are playing and a young woman is listening to a man talk. Joanna Hogg’s personal film of quietly conflicted youth is one that rings true across class and age, but that specifically comments on the female experience on the cusp of adulthood. Julie is an aspiring filmmaker working through university to find her voice, both through her art and the simultaneously formative and straining relationship with a mysterious older man, Anthony.

The film shares its name with Jean-Honoré Fragonard’s late Baroque painting of a well-poised woman, leaning against a tree carving the letter S while a well-groomed dog looks on. Julie and Anthony are in the Wallace Collection, musing on what the work of art could mean. Honor Swinton Byrne (daughter of Tilda) makes her motion picture debut as the young woman, whose character stresses a willingness to learn and listen, to grow as an artist and as some kind of emotional stalwart. She thinks the woman in the painting looks sad.

Julie’s world opens up as a tentative period of experimentation, as she tries to understand her place in it. Hogg frames this process with a love story, but never stifles Julie’s independent identity because of it. Her relationship with Anthony isn’t coloured with impulse or clichéd passion – theirs is a connection that preempts the turbulent catalyst of the narrative, one to be explored but rarely to be questioned. Antony disagrees about Fragonard’s oeuvre – he thinks the woman looks determined, and very much in love. 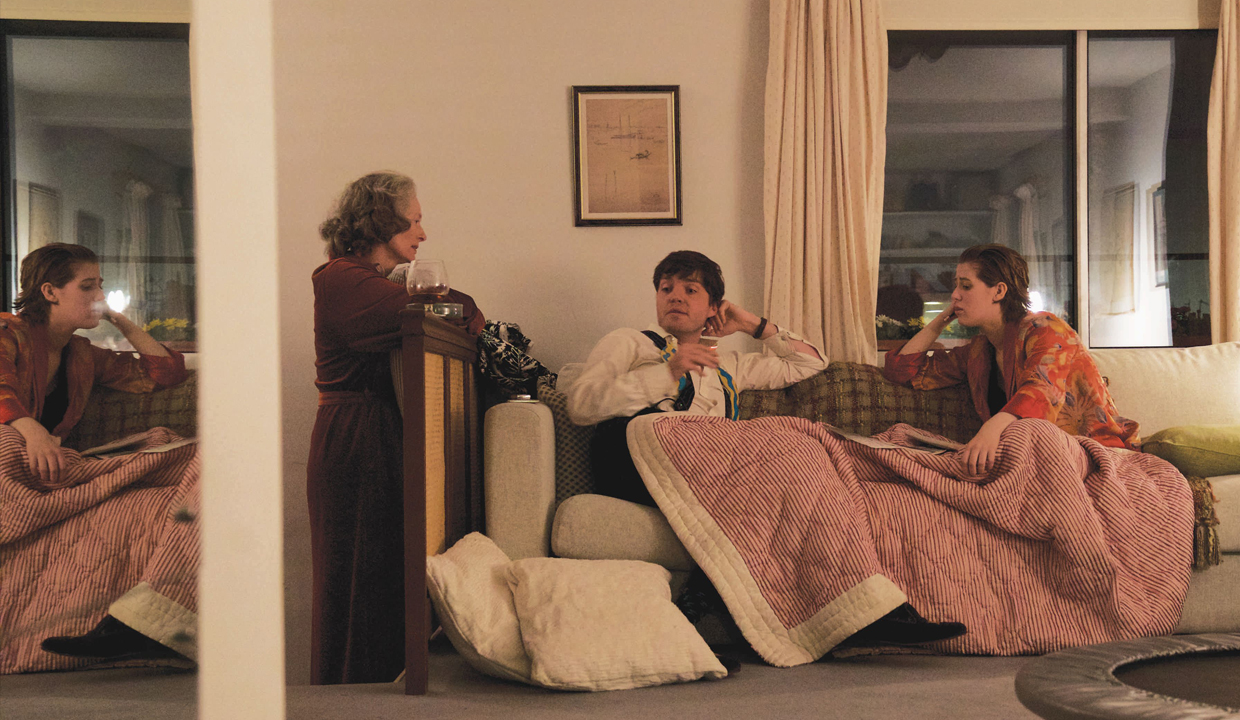 Tom Burke inhabits the character with an opaque arrogance, playing Anthony as patronising as an audience rooting for Julie would expect. But it’s this murkiness in his vulnerability that lets The Souvenir suggest a deep ramification of love, control, and the loss of both of these states of being. It’s a complexity that posits the film as a mood piece about two people resculpting their own identities, both independently and unavoidably bound, unlike anything a romantic narrative has been capable of doing in recent years.

The viewer sees this microcosm through Julie’s eyes, but Anthony’s words and actions hold inescapable influence. The balance created is unpredictable, as Hogg wanders through memories with fond nostalgia as much as alarming audacity: the camera probes spaces and bodies, words linger for longer than a screen-friendly script should allow. The results are intoxicating.

What could seem incidental is in fact symptomatic of the rebelliousness of Britain in the 1980s. The signifiers of rococo painting reappear in the curved edges, the golds and creams and opulent accessories of Julie’s Knightsbridge flat. But they lie on top of an unapologetically new wave soundtrack, favouring the art rock of Joe Jackson and Robert Wyatt as much as Glen Miller’s 'Moonlight Serenade'. Hogg doesn’t attempt to weave one frame of reference into the other, instead letting the spheres of privilege and punk exist in parallel, contrasting but never failing to cohere. The eclectic aesthetic isn’t overly showy, as it merely honours what once was, the way it was.

The hypnotic verve of The Souvenir is one that depicts a love story with incredibly minor, mannered displays of lust or desire, and still manages to feel incandescent. The film is a quiet masterpiece, an elegant glimpse at the past that savours the dangers of those in-between years, which is still so present. It’s a film to be revisited, unpeeled, dreamt about and agonised over for years to come. After all, lost love always leaves a bruise.