The Rehearsal, the first novel by The Luminaries' Booker prize-winning author Eleanor Catton, has been adapted into a great New Zealand drama

Stanley (Rolleston) is a young aspiring actor who has been accepted onto a prestigious acting course, where he hopes to develop his skills and improve his chances of industry success. The head of the acting department, Hannah (Kerry Fox), is known for her harsh critique and controversial methods to get the best out of the students, even if it means leaving them emotionally damaged or broken. During a bus journey Stanley meets Isolde (Ella Edwards), a college girl whose sister is involved in a sex scandal that has attracted significant media coverage. Slowly, Stanley and Isolde’s relationship evolves and they begin a romantic relationship. As the end of the year approaches, Stanley and his group have to come up with an idea for their final project and industry showcase; they decide to take the sex scandal as inspiration for their final piece, and Stanley begins to take advantage of his relationship with Isolde to observe her sister and learn more about the case.

Going further than merely portraying a journey of Stanley’s professional growth as an actor, The Rehearsal is about personal growth itself. On many occasions the audience questions whether it is witnessing an acting class or a therapy session, as the students open up and become more mature over the course of the year. 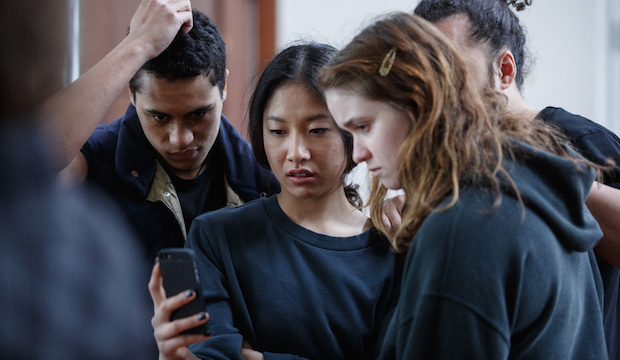 Initially Stanley appears to have little originality, and is frankly a quite bland protagonist. But as the plot develops the viewer discovers more about his background, including his narcissistic and womanizing father, and his character gains depth. The viewer becomes the accomplice in Stanley’s manipulation of Isolde, but also empathises with all of the young characters and their range of personality dynamics.

The refreshing young cast bring to life a story that abruptly jumps from the main storyline to rehearsal snips of the showcase preparation, all the while maintaining a steady pace. There is a realistic edge to the film that tackles raw emotions of first love and friendship, as well as the journey of personal growth. Interestingly, instead of focusing on the act of betrayal and conflict, Maclean keeps the suspense on Stanley’s silence, leaving the audience wondering if he will ever tell Isolde about his end of year project.

This engrossing film is slightly weakened by the overly good-bad binary and the lack of bigger vision, especially when it comes to Kerry Cox’s character; but overall, The Rehearsal is an innovative piece in which Maclean reveals her characters in searing emotional close-up, a process that is both mesmerising and slightly disturbing.