It would be foolish to underestimate the clout of a stink bug in Bong Joon-Ho’s Parasite. The little insects scuttle through crevices in the homes of the working-class and the rich alike, infiltrating spaces in secret and stealing whatever they can without worrying about bloodshed.

The stink bugs act as the spirit animal for one restless family – man of the house Ki-taek, his wife Chung-sook and his children Ki-woo and Ki-jung. We meet them scrambling for free WiFi and folding grubby pizza boxes for pennies, until Ki-woo picks up a job with the Park family.

The two scavenging offsprings get gigs tutoring two privileged offsprings, by photoshopping their talent and conning their way in. It works, and gradually the whole family is introduced to a world of lavish domesticity in which something more sinister is lurking between the floorboards.

This is where the plot description must stop – as the way the story develops in Parasite is excruciating, terrifying, thrilling all at once. Bong so fluidly zips between genres, mastering sharp wit as much as slicing violence and an urgent critique of class injustice. 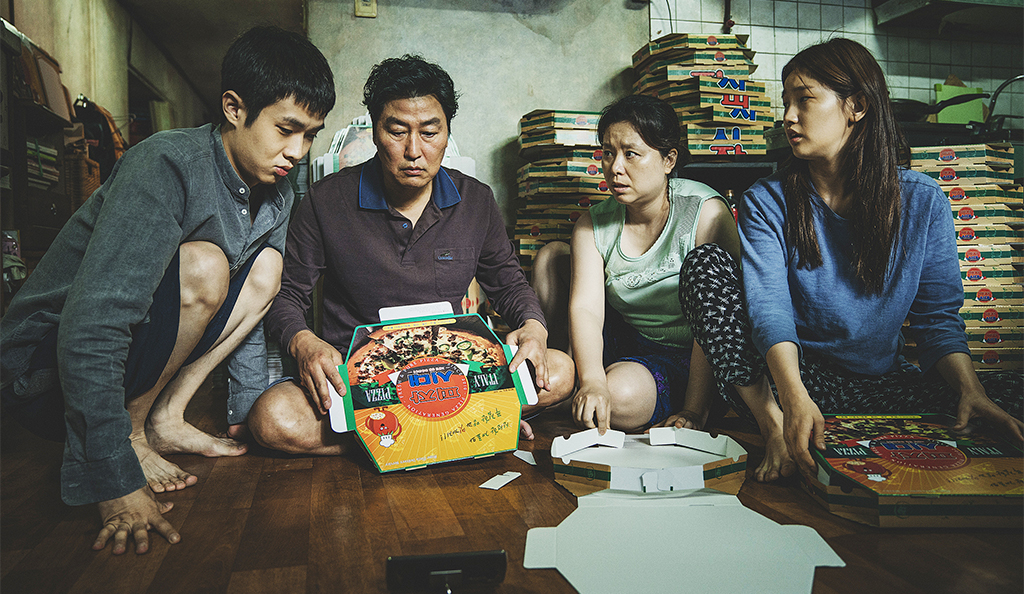 What sounds cerebral in fact tumbles into focus with giddy celebration. As the relationship between Ki-taek’s swindlers and Mr. Park’s pristine familial life develops, the peaceful order of things collapses. The possibility of horror is teased, the idyll of wealth is brusquely taunted.

The oddities of this artificial dynamic are heightened by note-perfect pantomimic performances from the outstanding ensemble cast (who took home the Screen Actors Guild award, making history once more), as well as a capricious soundtrack never wasting a moment of arresting entertainment. Bong is relentless and ruthless with his story, a master of his craft extending an invitation to walk through the depths of hell.

It’s important that Parasite never loses sight of Bong’s militant focus on class wars, amidst the riotous distractions that animate the picture. As with his previous features Okja and Snowpiercer, the director’s fiercely intelligent voice is unmistakable in Parasite, but the playfulness keeps its audience irretrievably invested.

Between hands over eyes, under impulsive yelps of laughter and groans of fear, the experience of watching Parasite is one that is stimulating, unsettling and wholly exhilarating. Bong is interested in what goes bump in the night, and how we choose to keep face during the day.

But you can’t run from a stink bug – by the time you’ve noticed their smell, they’re already deep under your skin.With Parasite, this feeling is utterly vitalizing.