It's not exactly the most incisive of Louis Theroux documentaries, but My Scientology Movie is definitely one of the funniest

‘You’re a terrible journalist,’ says an actress to Louis Theroux, in a recreation of the Church’s exercise. ‘Your wife is probably sleeping with your brother.’

Theroux just looks at her. His face is set as it always is: hangdog but content, chided but unruffled. It’s a face of infinite patience – its stare is neither penetrating nor forgiving. It just is. Like the stare of a cat.

‘He’s really good at this,’ says the actress, running out of improvised slurs. We knew this already, of course: Theroux’s face, and his enviable control over its expressions, is his greatest asset as a documentary maker. It’s a tool of pure deadpan comedy.

In My Scientology Movie it’s the comedy that’s centre stage. No one is going to echo the actress' claim that Theroux is a ‘terrible journalist’, but his investigative abilities do come up a little shorter than usual. Theroux’s strategy is to get a subject talking and then wait quietly, allowing them to read whatever they like into his blank, harmless-seeming gaze, unspooling themselves into further candidness and agitation.

But the Church of Scientology is too sealed by religious conviction and expensive lawyers for Theroux to get hold of even one hapless blabbermouth insider. The only blabbermouths available are high-profile ex-members on whose collaboration Theroux is depending for his documentary. It’s entertaining to see these conflicted men libel themselves, but it’s not very illuminating, at least not about the Church and its practises.

So My Scientology Movie is entertainment rather than edification. In this sense, it’s more like Louis, Martin & Michael – Theroux’s stifled attempt to meet Michael Jackson, which fell back on meta-doc humour – than the incredibly affecting Drinking to Oblivion. It’s classic Louis, but frustrated, idling, and getting nowhere fast. Luckily, this is immensely entertaining. The Scientologists are door-stopped and respond with predictable crossness, leading to exchanges that wouldn’t have been funny if Theroux wasn’t so obstinately polite and reasonable. 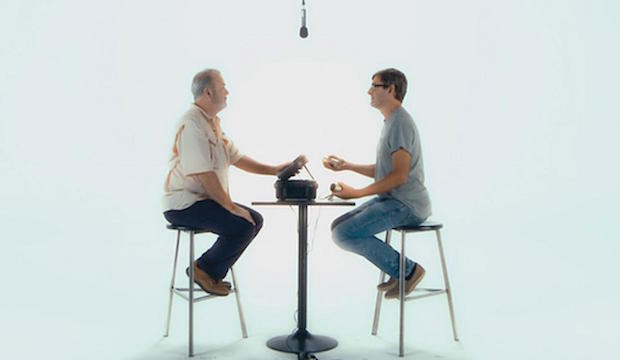 Louis Theroux is tested on an E-meter

The problem is that this expert irony doesn’t sit comfortably with the offences supposedly under scrutiny: violent abuse by the Church’s leader, David Miscavige.

Without much new material on this subject, Theroux and his team organise dramatisations of this abuse (and other sinister activity reported by defectors). It’s not clear that this achieves anything other than keeping the laughter stoked. Although it’s fun to see a room full of aspiring thesps doing impressions of Tom Cruise in all his bug-eyed lunacy, it’s not exactly a new or tricky target.

Worse, there are a few moments when it becomes dangerously easy to understand why Theroux’s interviewees might feel beleaguered by his silence, and to see some smugness or passive-aggression in his manner.

Those moments soon pass. Apparently it’s impossible to resist Theroux’s baffled-Englishman-abroad shtick, even when shtick is all there is on screen. Just don’t watch My Scientology Movie expecting to learn anything about Scientology.