The Girl on the Train movie does its best Gone Girl impression, and while Emily Blunt commands the screen as well as Rosamund Pike, nothing around her survives comparison

Granted, Gone Girl director David Fincher favours a handsome moody cinematography that makes his films look like a lot of modern thrillers (only better). But the visual similarities between the two films are undeniable, cosmetic resemblances that are the result of shared DNA.

Gone Girl and Train Girl are scandal movies that play on a prurient interest in the seamy flipside of respectable suburban life. They look like adverts in expensive magazines because they promise to tear up the glossy page: glass coffee tables will be smashed, lustrous hair will be tangled, and someone’s carpet will be stained with blood.

The fact that Gone Girl is a better film than Train Girl isn’t because it transcends these schlocky tropes; it’s just a more coherent bit of storytelling, a guilty pleasure that’s actually pleasurable. The Girl on the Train is a melodrama that takes itself too seriously.

The titular ‘girl’ is Rachel Watson (Emily Blunt), a divorcee with a drinking problem; the train is the one that Rachel takes for her morning commute, a route that happens to take her past her old house, where her ex-husband now lives with his new wife. Gazing out of the carriage window as the train slows down, Rachel is more interested in the couple that live several houses along ­– the young woman there seems to be living the life that Rachel wants.

In a hefty coincidence, this woman (Haley Bennett) is the au pair for the new Mr and Mrs Watson, and her life is anything but enviable. When she goes missing, the suspects are multiple and include jealous Rachel herself, so vodka-saturated that she can’t remember what she did on the night in question. 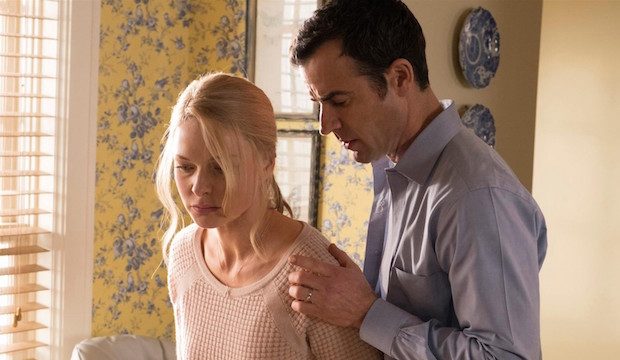 Rebecca Ferguson and Justin Theroux in The Girl on the Train

This narrative could have been adapted from Paula Hawkins’ novel in any number of ways; director Tate Taylor has made a film that is structurally faithful to the book. The result is a confusion of perspectives and timelines, a tangle of flashbacks, flash-forwards, voiceovers, title cards, misremembered flashbacks, imagined fantasy sequences, with a few red herrings thrown in for good measure. The Girl on the Train isn’t just about the terrible mess that lies under a perfect-seeming surface; it also embodies that mess on the level of storytelling.

The result is like listening to a long complicated anecdote by someone inexperienced at telling them. The deliberate inconsistencies are hard to tell apart from the inadvertent ones, the pacing is off, and the film contains nothing as deliriously entertaining as Gone Girl’s ‘Dougie-Hawser blood-fountain’ moment. Our screening was punctuated by the kind of short rasping snore someone makes when they feel themselves nodding off and automatically jerk their head back into the upright position. It's exactly the sound one hears on a long commute.

These films are pretty regular. Catch the next one.