Under the Shadow film review ★★★★★

Director Babak Anvari has crafted a subtle, feminist drama – and one of the best horror movies of all time

One week you can see a film like Ambulance that depicts the reality of being bombed with bold perspicacity; shortly afterwards, you can see a film like Under the Shadow that takes the dread of aerial bombardment and channels it into the nervous system with the precision of a sadistic acupuncturist. Two films, a documentary film and a scary movie, that explore one type of horror in different but complementary ways.

If cinema were consistently this rich, this thrilling and rewarding, we’d all be better people.

Just as Ambulance wasn’t solely ‘about’ what it’s like to be bombed, Under the Shadow is only partly a metaphorical evocation of the threat of attack. It’s a film that dwells on motherhood, marriage, and feminism, while also being so scary that you’ll watch it from between your fingers – and then start wondering whose fingers are these? Whose hand is on my face?

Under the Shadow is set in 1980s Tehran during the Iran-Iraq War, which is already a frightening place to be. Air-raid sirens send you to your dark basement, rumours abound that the Iraqi military are debuting undetectable missiles, and the masking tape applied to your windows (to stop them shattering in a blast) casts occult-looking X-shaped shadows through your home.

It’s even more frightening if you’re a woman. The streets are patrolled by men who enforce the conservative dress code with corporeal punishment, and if you’re a one-time left-wing activist like Shideh you’re barred from finishing your medical degree – you’re expected to stay at home and be a full-time mother.

Things get even worse for Shideh when her husband – who’s already a practising doctor – is drafted into the worst of the fighting, and she’s left to look after her young daughter alone. As their apartment building slowly empties of residents fleeing to safer areas, the ominous atmosphere becomes stifling. The vibration of fear is almost unbearable, and that’s before we find out about the unnatural evil that’s creeping through the halls. 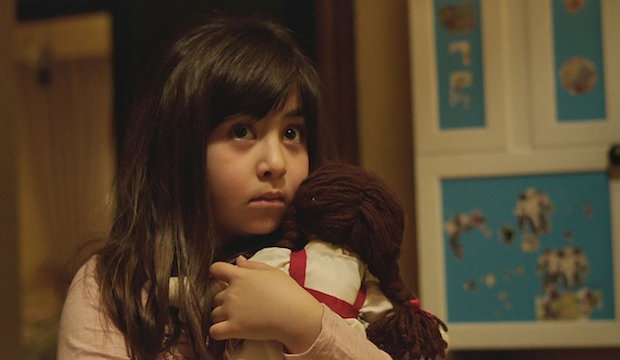 It’s rare that a film gets everything right – and it’s even rarer for a horror film. There’s just so much to do badly: the atmosphere, the characterisation, the ending, the actual horror (as opposed to cheap BOO! moments). And don’t even get us started on the gender politics. Under the Shadow is what a horror film looks like when it completely fails to put a foot wrong.

Take, for instance, the fact that it feels skin-crawling before it’s even announced itself as a supernatural bump-in-the-night-type horror. Or the fact that its feminism isn’t expressed as an agenda or ‘message’ but through director Babak Anvari’s genuine interest and investment in Shideh (excellently played by Narges Rashdi); an interest in her difficulties as a woman and her imperfect, human responses to these difficulties. Or the fact that its BOO! moments feel earned, and are pulled off with such restrained-yet-horrible effect that you scream and swear and laugh nervously at how loud you swore.