Your invitation to the most glamorous night in fashion, plus the eight months of gruelling preparation with Vogue editor-in-chief Anna Wintour and curator Andrew Bolton

Vogue documentaries seem to be enjoying a... well, a moment in vogue. Earlier this month, Absolutely Fashion: Inside British Vogue aired on BBC2 to celebrate British Vogue's centenary year, joining the dazzling and ever-increasing collection of fashion documentaries we've been watching recently.

American Vogue, being much older than it's British counterpart, is well over 100 years old. The First Monday in May has nothing to do with the many Vogue celebrations that swept London this year. Directed by Andrew Rossi, this new documentary offers a 'behind the scenes' look at the work and organisation that went into the fashion industry's biggest night of the year in 2015 (or as former Vogue editor-at-large André Leon Talley pronounced it: "the Super Bowl of... fashion events"). For eight months, Rossi joined Artistic Director of Condé Nast and editor-in-chief of Vogue Anna Wintour and curator Andrew Bolton as they worked to pull together The Metropolitan Museum of Arts 2015 Met Gala and 2015 fashion exhibition "China: Through The Looking Glass". 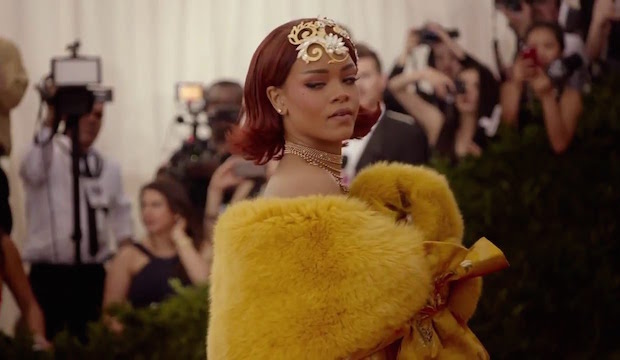 Anyone with the slimmest interest in fashion or celebrity will recognise the images from the Met Gala last year: Rhianna in the endless golden fur-tripped cape made by Guo Pei, Jennifer Lawrence in oriental-inspired Dior Couture, Anne Hathaway in a shimmering, hooded robe. The images of the celebrities turning up in couture to the opening of the Metropolitan Museum of Art's exhibition became world-famous over night.

Rossi's documentary ushers the public into that glittering party, to join the laughing celebrities meandering down the red-carpet, past the giant white-and-blue flower arrangement and into the exhibition space. But the film also stays with Anna Wintour, snide and superior, as she does her best Devil Wears Prada impersonation and steals the show.

The multi-talented Andrew Bolton, curator of "China: Through the Looking Glass", is shown working hard to present fashion as a form of art, offering up an exhibition that explores Chinese influence on Western art, culture, and fashion without wandering into the territory of cultural appropriation (it's not clear that he managed it, but that's probably one for Edward Said).

Bolton does manage, however, to work his way out from under the enormous shadow cast by his previous success, curating the Museum's much-loved "Alexander McQueen: Savage Beauty" in 2011. It's fascinating to watch someone create a vision under a huge amount of time pressure, trying to please everyone (but especially critics and celebs) and give room to his vision.

Proving that party-planning and curation are as worthy of being documented as anything, this is a must-watch film for anyone with an interest in art, fashion, and celebrity.

The First Monday in May review