Loro review 3 Loro review Gus Mitchell
Paolo Sorrentino’s latest film Loro takes on a mighty subject, and he seems the perfect director to tackle it. A personal and political meditation, with a great deal of sex and drugs, the film focuses on the alternately lionized and despised former Italian prime minister and mogul Silvio Berlusconi, and the coterie of insiders, businessmen, politicians and grafters who circle Berlusconi in aid of their own ambitions.

Originally released in Italy in a two-part distribution over two weeks, the Italian 204-minute cut was reduced to 145 minutes for Oscar consideration and international distribution. The main feeling while and after watching Loro is that too much has been lost.

Set at the time of Berlusconi’s political eclipse, around 2006-2009 when he was no longer prime minister, Loro opens by introducing Sergio Morra (Riccardo Scarmacio), a hedonistic and hungry political and media player looking to rise ever higher. He decides that the best route is to work his way through to the inner circle of Berlusconi, in semi-self-exile in sublime Sardinia, through the famously Berlusconian formula of throwing delirious ‘bunga bunga’ parties next door, overflowing with drugs and beautiful young women.

However, this early plotline – which takes in a proliferating rostrum of characters from models to tycoons – largely falls away a little before the hour mark, and the film then concentrates largely on the character of the Berlusconi himself, played by Toni Servillo with the kind of intriguing, intelligent brilliance that always delights. 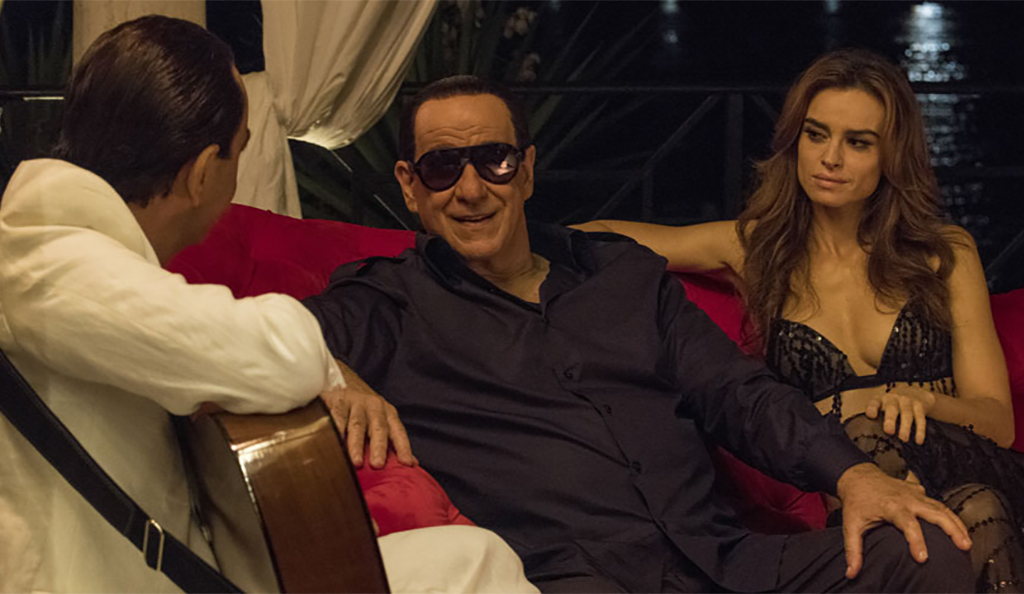 The film’s major problem, though, lies in its inability to let a coherent structure emerge from simultaneously powerful and intriguing elements. Aside from Servillo, the cast is uniformly strong – especially Elena Sofia Ricci in a well-drawn role as Berlusconi’s second wife, Veronica Lario, and Riccardo Scarmacio’s sly Sergio as a much more convincing parallel to Leonard DiCaprio’s Jordan Belfort in The Wolf of Wall Street.

Unfortunately, Scarmacio’s role becomes awfully truncated, as after a lengthy exposition he’s never afforded any possible development – which leaves the film with an extremely lopsided tinge. Disparate bits might make sense if they were to be integrated, but merely look jarring – such as a fourth-wall breaking account of the workings of MDMA pills as they fall from the sky onto the revellers, or the story of a lamb dropping dead from the cold air conditioning of Berlusconi’s house.

The clue to what is perhaps the film’s core lies in its title – Loro (‘Them’) refers to both Berlusconi and the power-brokers and grabbers that surround him. But it’s also interesting to focus on the more complex probes that Sorrentino undoubtedly makes throughout this epic, from questions of morality to ambition and the ethical responsibility of the public.

There are enough intriguing loose ends and brilliantly executed images to still make this version of Loro worth watching, but it’s possibly the two-part version, or a final, director’s cut that would provide the film that seems to be deserved. We might have to wait for a while.