When the veteran talk show host in Late Night, Katherine Newbury, approaches a crossroads, she fails to take a minute to work with herself. She’s told by her boss that her jokes aren’t good anymore, and by her (male) assistant that she hates women. Katherine doesn’t instinctively question her own discomfort in relating to other people – she performs and reacts, but only really realises the problem when she physically sits down with her writers and has to acknowledge all seven white, male faces looking back at her.

Mindy Kaling addresses the shortcomings of an imbalanced industry in Late Night with a quippy and self-aware story. She writes and plays the part of Molly Patel, a comedy aficionado with zero writing experience hired to, well, meet a quota, but then to defiantly shake things up on Katherine’s show. She recognises the weight of a ‘diversity hire’ and reclaims its negative connotations to prove her talent in the writers room.

It’s a well-timed and well-executed premise, as Kaling proves she’s more than capable of creating and performing roles that offer more than the entertainment value of a sidekick, side hustle or bit-on-the-side. Late Night suggests a proactive world in which tokenistic vacuity is kicked in the teeth with a great big smile, refocusing the spotlight even if it can’t always reshape the status quo. 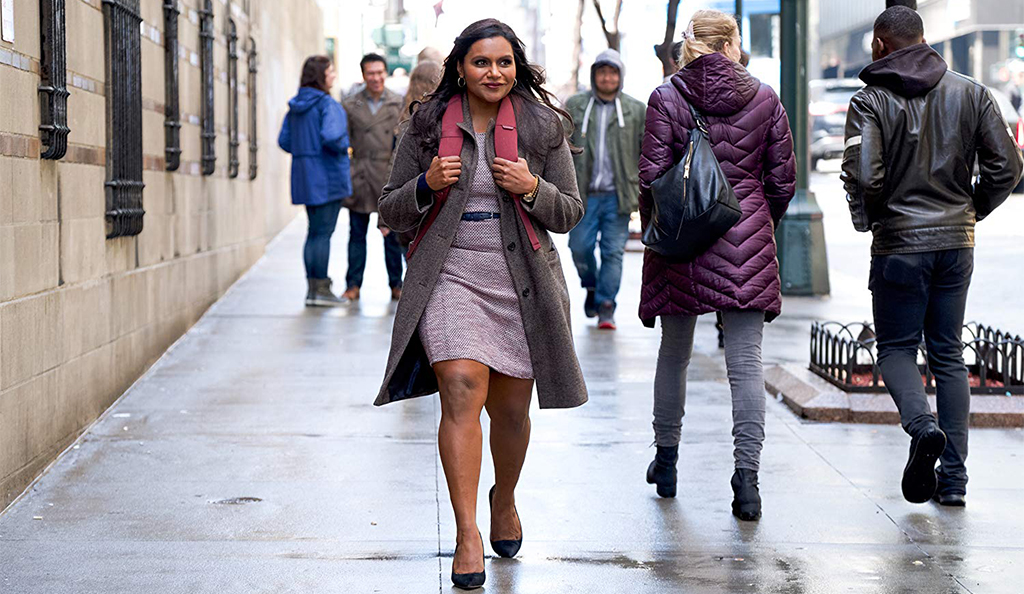 The writer teams up with Emma Thompson as her chosen woman on a mission, who plays Katherine with utterly showy and silly brilliance. When she explains to Brad not to start any sentence with ‘“as a female…” ‘because it’s tacky’, the deafening silent response from a million gimmicky marketing campaigns (still trying to dully repackage throwaway feminism) sounds glorious. Together, Kaling and Thompson tackle every elephant in the room and dive headfirst into the details of both women’s ambitions and insecurities.

But because the script makes sure to tackle so many frustrations, the picture rarely takes the time to savours its jokes or confessions. Conversations airing doubts just sound more like two people waiting for their turn to speak – both parties have insightful and witty things to say, but it’s so often that bit too insightful that it fails to ring true. The jazz-hands energy of late night TV infuses the film with sustained theatricality, through a relentless lively soundtrack and endless punchlines, which buries the emotional crux underneath every next ‘bit’.

For a film so determined to give depth to women at every level, the reliance on men feels a touch disappointing. The writers, lovers, helpers are all well-cast and well performed, but a half-written handsome antagonist and a last-minute kiss on the shoulder lessen the impact of everything Molly and Katherine had aimed to prove with their determinedly independent careers.

There’s a lot of genuine fun to be had with Late Night, proving the combined talents of Kaling and Thompson are still overflowing. But with so many militantly entertaining ingredients, this particular project has ended up tasting somewhat overbaked.