Fresh from the next best generational anthem, Beanie Feldstein and Kaitlyn Dever tell Culture Whisper about their experience acting in Booksmart 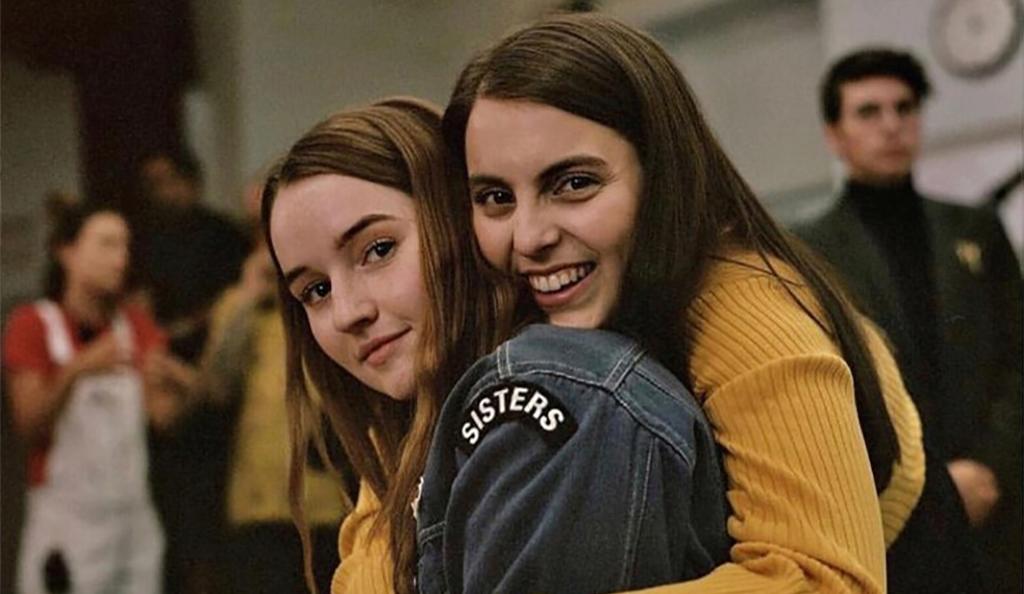 Kaitlyn Dever and Beanie Feldstein in Booksmart
There’s no reinventing the wheel of high school movies, but it’s sometimes worth giving it another spin. Leave Superbad in 2007 and forget High School Musical indefinitely – the film on everyone’s mind this year is Booksmart, a fresh comedy about two teen girls, great students, best friends, hellbent on having one first and last night of fun.

The film marks Olivia Wilde’s directorial debut and offers a distinctly distaff perspective on the stories so often told from a male (and somewhat stale) angle. Her heroes are Molly and Amy, played by Beanie Feldstein and Kaitlyn Dever. Their names might not be starting wildfires yet, but these roles are the ones destined to light the spark to ignite their careers.

Feldstein, who previously starred as Lady Bird’s best friend Julie in Greta Gerwig’s own coming-of-age picture, blossoms as Molly and is effervescent when describing where Booksmart sits within the canon. She recognises the timeline is key – the last week of high school. ‘It’s the last collective experience that everyone has’, she explains. ‘It’s such a pinpoint of nostalgia for everybody’.

She’s in a good position to understand nostalgia – as her role in Booksmart fittingly follows the footsteps of her older brother, Jonah Hill, who made his name in Superbad way back when. But Feldstein’s new film strays from the path of her brother’s, as the landscape allows for a more heterogenous student body than a filmic landscape seems to have allowed in the past.

Dever, last seen alongside Timothée Chalamet in Beautiful Boy, believes this kind of inclusivity is rare for a mainstream comedy offered up to a wide audience. ‘The film has so much inclusivity, it feels rare’. Dever’s character, Amy, is tentatively figuring out how to talk to the girl she has a crush on, without this strain feeling tokenistic or half-hearted. ‘Sexuality is so fluid in this film’, Dever says, ‘I think that’s really beautiful’. 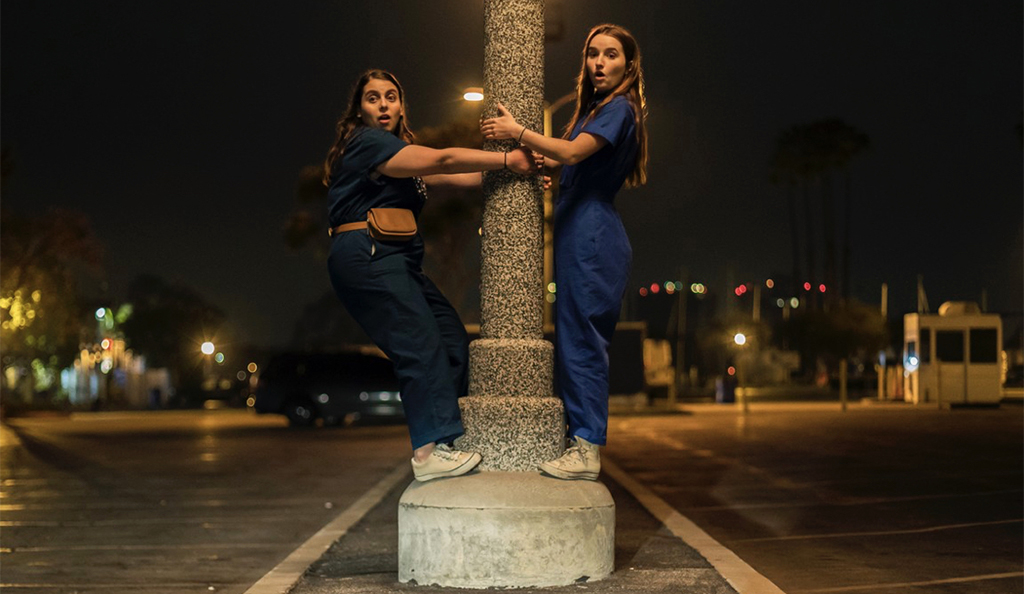 Molly and Amy are different to the other kids – they prioritised homework over hanging out, and it’s when they realise that everyone else got accepted into the same esteemed schools that they decide to show the world they can have fun too. The dynamic is understanding, though, and this isn’t a binary ‘Us v. Them’ conflict.

‘There’s no real hierarchy in this high school’, Feldstein explains. ‘I love this, because that was so true to my own high school experience’. There are drama lovers, skaters, ‘cool’ kids and clever ones, and while these social groups are distinct, no one in Booksmart is hostile.

There’s a lot of reasons to love Molly and Amy, and it’s so easy to root for their fulfilment. This comes from two top-tier performances, as well as careful writing that respects such a formative relationship. ‘The film’s humour is driven by intelligence’, explains Feldstein, ‘and by a genuine love between two women and a friendship – that is so revolutionary at such a young age’.

They point to pinnacle titles like Bridesmaids for a slightly older generation, but it’s clear that Booksmart is writing its own story for a world of late teens to identify with. ‘You can feel like your opinions aren’t valued because you’re younger’, Dever admits. ‘Olivia [Wilde] treated us as equals, never belittling any ideas or thoughts we had’. This lends a sense of confidence to the picture, brimming with hope and hedonism in equal measure.

Youth is designed with pinprick-precision in Booksmart, full of visual and sonic cues to bring Molly and Amy, and their orbiting world, to life. Both Feldstein and Dever immediately rush to sing the praises of April Napier, the film’s costume designer (following her work on Lady Bird). ‘She’s a genius woman’, Feldstein levels.

‘The amount of detail that was put into every single sock that someone wore is truly insane’, Dever says. Napier understands that this isn’t a makeover movie. Molly and Amy are considered less cool than other students, but they have their own kind of power, which speaks through their clothes. ‘They have style’ Feldstein explains, ‘They’re not going to give it up – they’re projecting a very specific story about themselves into the world’. 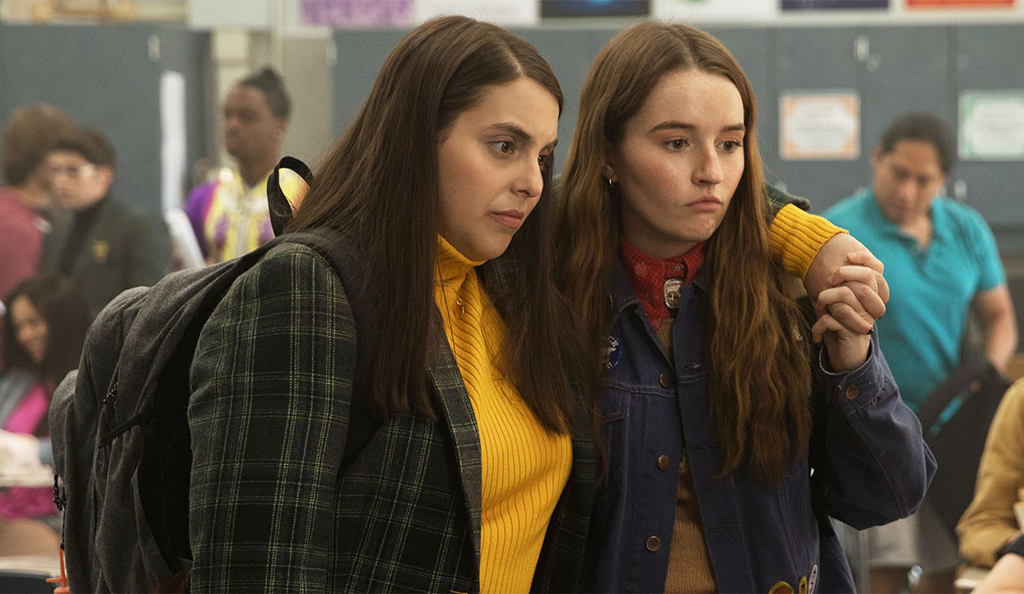 A blazer with a turtleneck, in the middle of June in Los Angeles – this is what Molly wears, because this is her armour. ‘Olivia never wanted us in a generic plain t-shirt’, says Dever. ‘Amy’s jacket describes her in every possible way’. Every iron-on patch tells a different part of her story, bringing together a true and specific portrait of a teenage girl in 2019.

Before Culture Whisper leaves Beanie and Kaitlyn, we ask them one final question that feels pertinent for the stars of a film described as a generational anthem, one that sings its heart out and has Alanis Morissette, Lizzo, LCD Soundsystem and more on the soundtrack to prove it.

‘I love Desert Island Discs!!’, Feldstein confirms. The songs instinctively chosen by both actors reveal the wisdom of their youth, the passion for their art that lines up with their characters. ‘I feel like my taste in music would be similar to Amy’s’, Dever says. She chooses Painter Song by Norah Jones, Lullaby by the Cure. She pauses, and then adds Case of You by Joni Mitchell, Never Going Back Again by Fleetwood Mac and Somebody Else by the 1975.

Feldstein goes for Fire and Rain by James Taylor, Return to Pooh Corner by Kenny Loggins. Molly’s affectionate side shines through with Will You Love Me Tomorrow? by Carole King, and the actor’s Broadway background comes to the fore as she chooses Put on Your Sunday Clothes from Hello Dolly.

There’s more to Molly and Amy than their grades and their performances – and the same goes for Beanie and Kaitlyn. Two young women, learning and thriving in and with the world around them. In all its style, colour, intelligence, music and friendship, Booksmart gave us these two rising stars – and now, they are giving us everything they’ve got.