There’s very little silence in Sam Mendes’ absorbing WWI picture 1917. Two young men rest against a tree, for an initial fleeting few minutes, trying to save what small amounts of energy they have – but the shouting of soldiers and the whirring of planes is inescapable.

What begins as a familiar depiction of a mass effort to save history quickly zooms in on the race against the clock for just those two boys, no longer at ease. Colin Firth (the first of a handful of household names cropping up for one scene, and then gone) lucidly gives privates Blake and Schofield the instructions to deliver a message miles away, in enemy territory, that could save 1600 lives – including Blake’s brother.

These circumstances aren’t exotic, but Mendes approaches this world with untrammelled immersion. The director captures the immediacy of the trenches, the mechanical nature of war but also the vulnerable circumstances that can save or lose a life in a fraction of a second.

He achieves this both visually and sonically: he works with cinematographer Roger Deakins to keep the camera firmly on the two soldiers, achieving a near-perfect through-line of just one shot. There is but one rupture, and it’s felt with the severity of falling hard on concrete, with no one to hear your bones break. The light shifts from fire-yellow to the blue of dawn, and the ground moves from rubble to water. It’s visually fluid and transporting, to the point of dizziness. 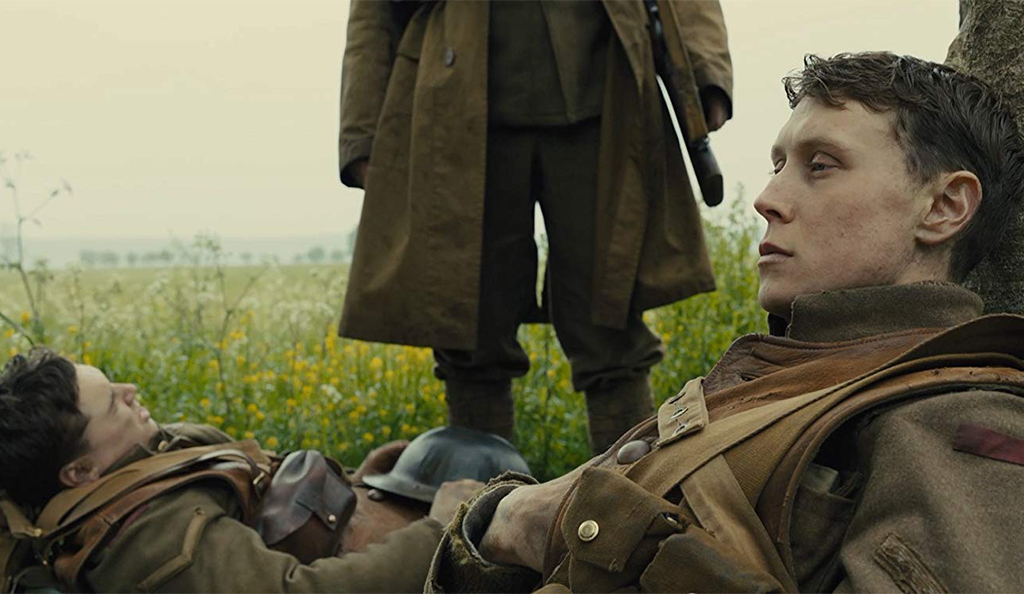 Dean-Charles Chapman and George Mackay in 1917

Composer Thomas Newman delivers an unrelenting score, one that swells with high-stakes pathos almost constantly. It makes moments of quiet all the more chilling, and ones where physical strain marries cinematic effort feel breathtaking. Silence is chosen, and earned.

The script is as tight as a video game, laying out the blueprints for the task at hand and swiftly moving over relay posts with propulsive pacing. The film is rife with adrenaline throughout, as the reality refracted through two humans’ eyes seems to contain an urgency that cannot be diminished.

Although it can boast almighty technical prowess, 1917 effectively reaches an audience right in the gut because of its leading men. As Blake and Schofield, Chapman and Mackay fight for their lives – and unquestionably earn a seat at the table with all their high-profile co-stars who merely drop in to say hello. Andrew Scott, Benedict Cumberbatch, Mark Strong, Richard Madden: they, of course, impress – but the movie belongs to this new generation.

The air is thick with fear, but also with bravery. Chapman fully embodies the dedication required to save so many men, and Mackay rises to the challenge as a powerhouse performer in his own right. It’s in their searing humanity, one that needs to keep moving to survive as opposed to merely repeating an order, that the two soldiers win their fight.

Paired with the all-out cinematic spectacle that Mendes has orchestrated, you’ll struggle to find a more commanding film experience this awards season.