Interview: the duo behind All On The Board on their new book and identiy reveal

We meet the pair behind TfL’s poetic noticeboards and find out about their new book: All On The Board: Inspiring Quotes from the TfL Underground Duo 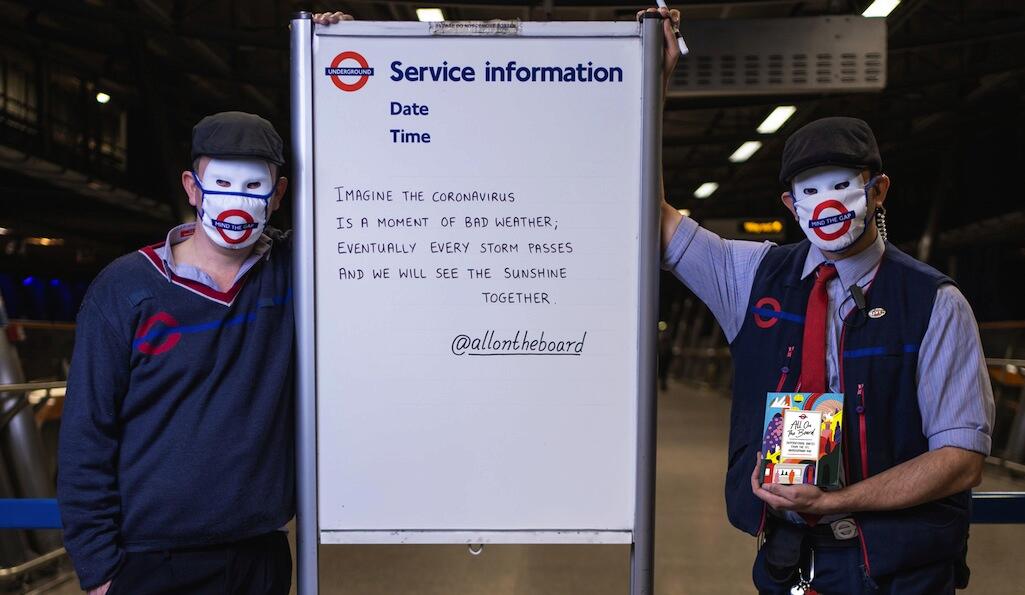 All On The Board duo: Ian Redpath (left) and Jeremy Chopra (right) credit: Max Rose-Fyne
Regardless of which stations you commute between, if you use the London Underground (or did in ‘old normal’ times), chances are you will have come across an information board brandishing a playful, punchy or poignant quote by the All On The Board duo. The pair of TfL employees have been penning poems and creative messages – covering topics from one-off music events to love and mental health – on information boards at Tube stations since 2017.

Three years on and the duo have clocked up 600,000 followers on their social channels, and count a ream of celebrities including Liam Gallagher, Katy Perry and Michelle Obama among their snap-happy fans. Until now, they’ve remained anonymous, donning masks before delivering their declamations, and going by the pseudonyms N1 (NoOne) and E1 (EveryOne), or collectively as NE1 (AnyOne), when asked who writes the boards by members of the public. They’ve even been referred to as ‘The Banksys of the Underground’ and, to their delight, as Batman fans, ‘The Masked Duo’. 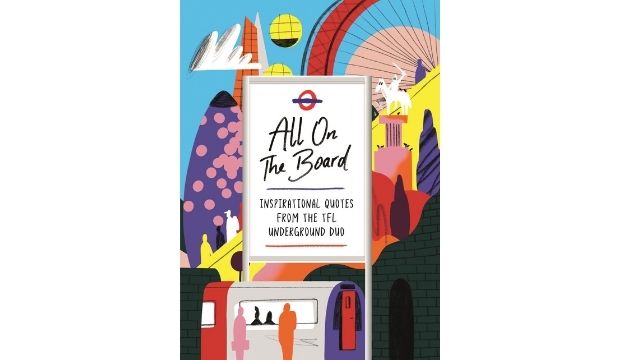 All on the Board: Inspirational Quotes from the TFL Underground Duo is published by Yellow Kite, £14.99, out now

Now, to coincide with the launch of their debut book All On The Board: Inspiring Quotes from the TFL Underground Duo – a curated edit of their whiteboard posts – the duo have come clean, revealing their identities as Ian Redpath and Jeremy Chopra. ‘We wanted the boards to speak for themselves instead of being about us,’ says Redpath, adding that demasking will hopefully allow them more creative freedom.

‘At a time when everyone is putting on masks, we’re taking ours off; it’s kind of symbolic,’ adds Chopra. ‘There’s going to be a lot of disappointment; we’ve told people we look like George Clooney,’ he laughs, alluding to the fact that in the beginning, the pair would wear celebrity masks when writing or wheeling out the boards.

When better to release a book celebrating the ability to unite commuters through shared sentiments than in a year that’s seen Tube travel reduced from four million journeys a day to just 80,000 in peak lockdown, with many of us now feeling a pang of nostalgia for our former overcrowded commutes. 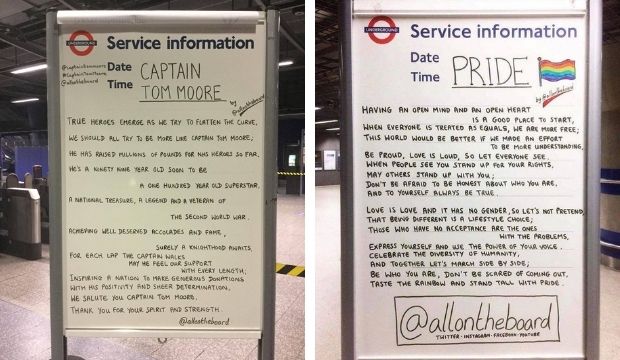 With their messages of positivity, inclusivity, remembrance and humour, the quotes have lifted spirits and raised smiles on the faces of those who have seen them – and, the duo hope, will reach a whole new audience now they’ve been collated into a book. Working with publishing house Yellow Kite, the pair whittled down their 2,000 quotes, grouping the best into 12 themes for the book, which include: 'raising awareness', 'love', 'mental health', 'London' and 'legends'.

Redpath and Chopra weren’t the first TfL employees to write quotes on station whiteboards. The trend was begun back in 2004 by Oval station customer services manager Anthony Gentles, who posted a ‘quote of the day’ from Tao Te Ching, a book rooted in the Chinese philosophy of Taoism. Others followed suit, posting quotes that inspired them on the boards of their own stations. But the All On The Board duo were the first to pen original quotes, inspiring commuters with their own creativity.

It began on the night of a Craig David concert at the O2 Arena back in March 2017. ‘While singing some of his songs to ourselves we started talking about our favourites, and this led us to compose a little poem using some of his song titles and lyrics,’ the pair recall in the intro to their book. ‘Right in front of us was a customer information board with the words “keep right” written on it. We thought our poem should be shared with the fans and so we wrote it there and then on that board. It was spontaneous.’ Before long, customers were stopping to read the board and taking selfies with it. ‘After the concert we had an epiphany and we started posting quotes every day,’ says Redpath. 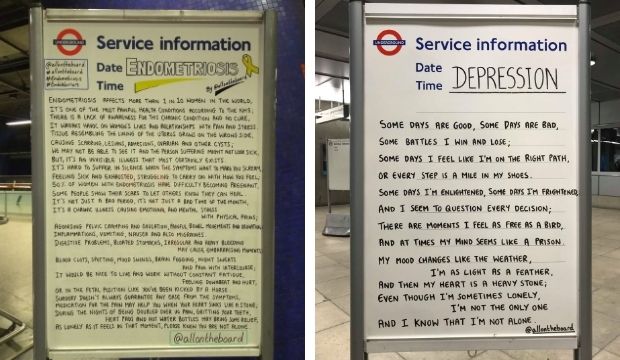 Prior to the first public board, the pair were already writing poems and stories, and creating videos together, behind the scenes. ‘Helping customers navigate the station can be quite a robotic experience, but we’d interact with them, bring out puppets and put song titles in the directions,’ grins Chopra, who has been known to sing directions to the customers, while Redpath would rap the route to their desired platform.

At first, the pair stuck to writing posts about concerts and other events. But it was when they expanded to cover messages of hope, remembrance and awareness of health conditions, that the boards really took off. Over the last three years, they’ve dedicated posts to illnesses ranging from endometriosis to tinnitus and eating disorders, which Chopra himself has struggled with in the past, and hope to eventually cover all conditions. ‘There are so many things you could write about in the world and if we could write every day we would,’ says Redpath. ‘We will get around to writing about every condition that isn’t seen.’

Politics is, perhaps, the only subject of which they steer clear in order to avoid contention. ‘We don’t want to go down that route as it’s not positive,’ says Chopra.

It was when setting up social media accounts for All On The Board, providing a platform for commuters to post selfies taken with the quotes, that they realised just how far their reach was, and in some cases, which famous faces were seeing the posts. 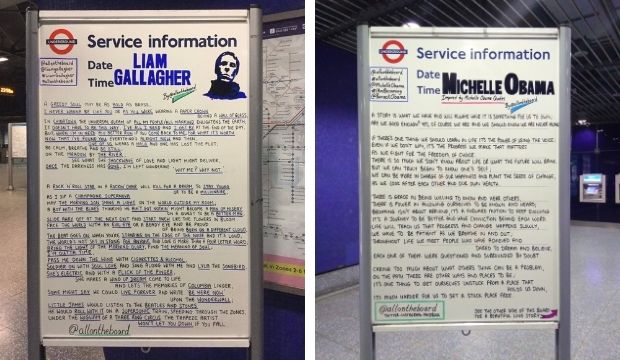 When Michelle Obama was speaking about her memoir Becoming at the O2, the duo wrote a love story tribute to her and Barack on the board at North Greenwich station. The post caught the attention of a member of the former First Lady’s staff, and she later posted it on her Instagram story. ‘It’s crazy to think two London Underground station workers can have a poem seen by the former First Lady of America. It makes the world smaller in a good way,’ beams Chopra.

As for who else they’ve been starstruck by, they’ve each got their own list of names. ‘Katy Perry was doing a two-day concert at the O2. On the second day, she put on a disguise and filmed herself laughing on the Tube as no one realised it was her. Then she got out at North Greenwich and took a selfie in front of her own board for her own concert,’ laughs Jeremy, clearly chuffed.

‘Personally, I really love movie music. Ennio Morricone had a concert at the O2 last year – his last London concert – which I went to. Hans Zimmer, who’s my favourite composer, had gone to the same concert, saw the board and shared it. That blew me away; two of my favourite composers, it’ll always stick with me.’

For Redpath, it was Liam Gallagher sharing his All On The Board poem on Twitter. ‘I almost choked on my Frosties! I love Oasis, they’ve sung the soundtrack to my life,’ he grins. 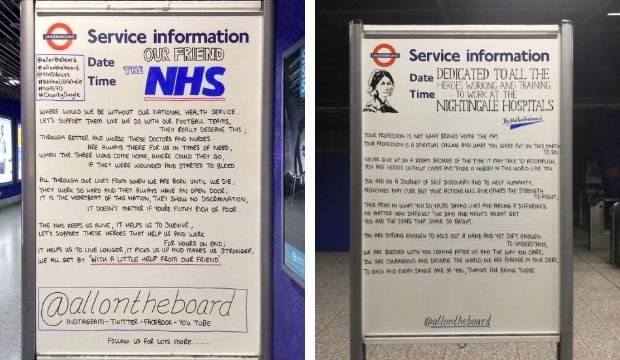 Despite the lack of footfall at tube stations during the pandemic, the pair have been writing messages more frequently than ever in a bid to unify commuters during such isolating times. 'The Underground is the busiest place in London but it’s also the loneliest,' points out Redpath. 'The boards help us connect with people we wouldn’t otherwise have connected with.' The final chapter of the book, In It Together features quotes written during the lockdown – including praise of 100-year-old Captain Sir Thomas Moore and his 100 laps of the garden – which will, in time, be reminders of the unprecedented year 2020 has turned out to be.

Writing the All On The Board quotes has become a second full-time job for Redpath and Chopra, but they have no plans of stopping any time soon. ‘There’s so much that needs writing about in the world right now. There’s a lot of darkness and people need something to feel better about. The boards help provide that,’ says Redpath.

‘Many times over the years we’ve had people messaging us to say you’ve posted that just at the right time. It’s usually when we’ve posted something like the Don’t Delete Yourself poem. We know what that means,’ adds Redpath who, when working as a Tube driver, once witnessed a suicide on his line. ‘There’s a lot of people who don’t use social media or go on the Tube who could use that book. That’s our hope for it.’ 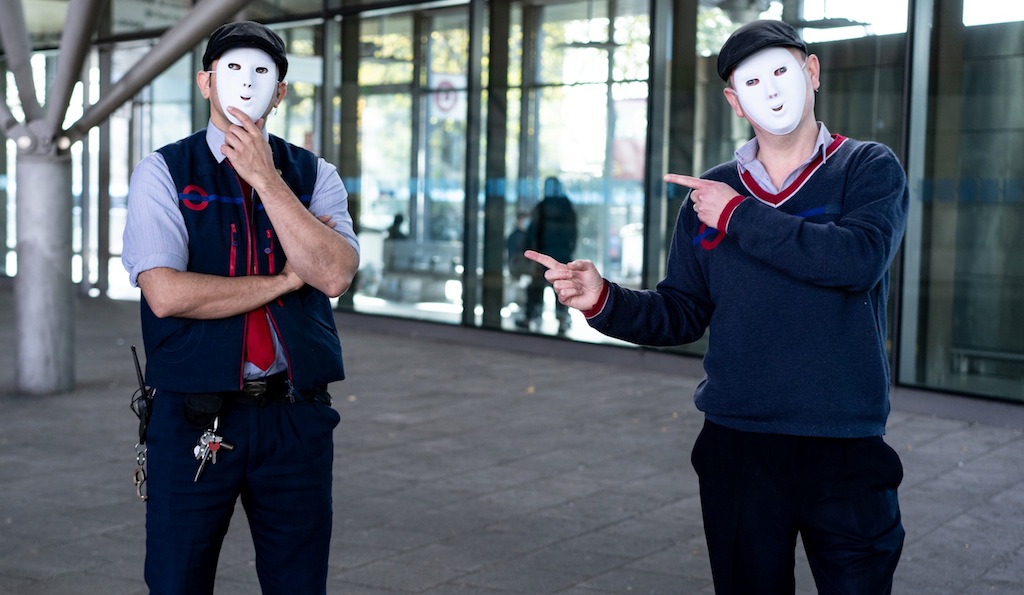 The pair are already collaborating on future projects, including children’s stories and a sit-com, but for now, they’re thrilled to see their quotes neatly compiled and released in book form.

‘To me, the book is like a rainbow of words. We often point out that whenever there’s a storm there’s a rainbow at the end of it. We want the book to be the rainbow you know is coming at the end of the storm,’ says Chopra. ‘So it’s like a companion [that] makes you feel better when you need it,’ he adds.

‘It’s got less words than War and Peace, more words than The Very Hungry Caterpillar, it’s not as sexy as Fifty Shades of Grey, it’s not as magic as Harry Potter,’ chuckles Redpath. ‘But it has the potential to be like a friend to everyone, and hopefully it inspires people and reminds them they’re not alone.’

All on the Board: Inspirational Quotes from the TFL Underground Duo is published by Yellow Kite, £14.99, out now