The rise of vegan junk food in London 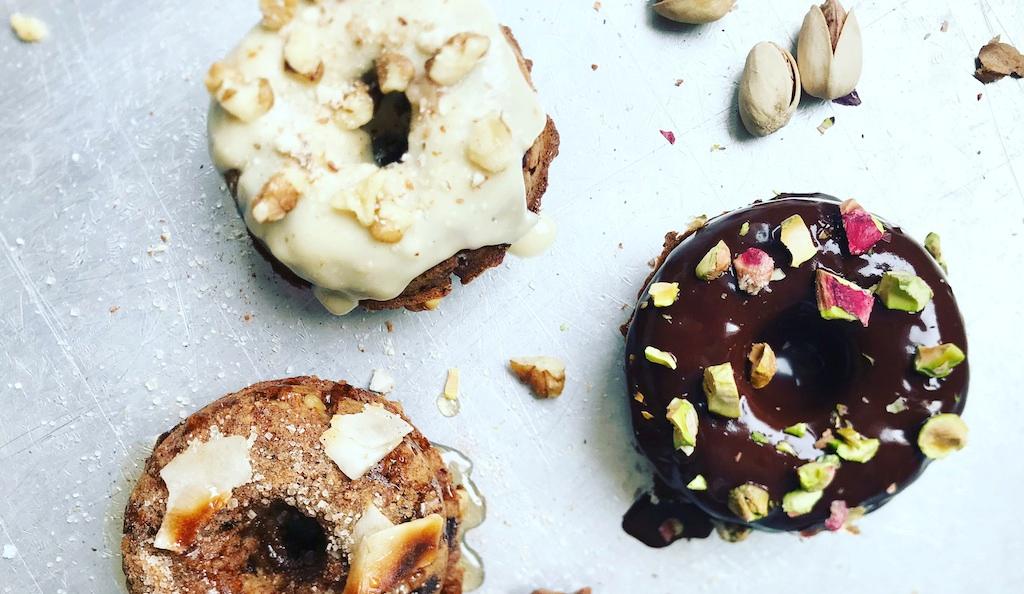 The rise of vegan junk food in London
The stereotype may be that cabbage is a vegan’s cake and broccoli their burger, but veganism isn’t just about smashed avocados on toast, cucumber detox smoothies and cauliflower rice.

Plant-based eating is advocated as a generally healthy diet – or even a lifesaver that cures all, if the documentaries Forks over Knives and What the Health are to be believed. Strictly speaking, though, veganism is an ethical choice that’s concerned about animal rights rather than the maxed-up sex appeal and eternal life that are alleged to come with it. Ditching dairy and caring about cows doesn’t make everyone a lover of lentils or queen of quinoa: vegans get junk food cravings just as their carnivore cousins, and it’s perfectly possible to indulge and go for that artery-clogging effect with no animal product in sight. 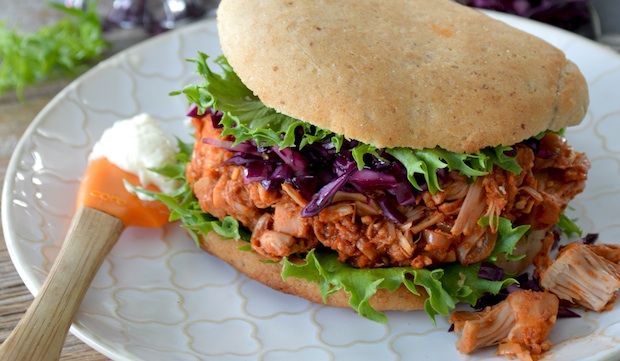 Jackfruit is a popular meat substitute

As the classic meat and two veg is becoming increasingly veg, veg, and veg – one in eight in the UK is now vegan or vegetarian – restaurants and supermarkets alike are realising that it’s not just salad that vegans want, but also comfort from carbs or non-meaty munchies.

Chefs and food scientists are working their magic on soya, seitan (a chewy wheat-gluten-based meat substitute – not as satanic as it sounds), oats and jackfruit, to mention but a few, to create substitutes for meat and dairy favourites, covering everything from mac ’n’ cheese to hotdogs. In 2018 Beyond Burgers made their UK supermarket debut – the plant-based burger is so meat-like that it bleeds (beetroot juice, worry not), while 2019 kicked off with Gregg’s vegan sausage roll, which dominated headlines and had devotees queuing up for pastry-wrapped goodness.

Just like traditional junk, not all vegan alternatives are created equal, and the best ones are innovative and play with flavours instead of just providing a fat high and a sugar rush. Vx near King’s Cross, for instance, prides itself on being London’s first wholly vegan shop, and while its steak frites, burgers and nuggets might’ve been at the top of the food chain when cardboard-like soya patties were the best you could get, now it’s something of a vegan McDonalds. You know what you’re getting – and also that there are better options out there.

Beware of anything that claims to be just like the non-vegan original – blue cheese substitutes are particularly notorious among the vegan community, and fish alternatives full of mystery ingredients that haven’t been anywhere near the sea tend to be plain fishy. Instead, opt for the not-so-fakes: Gosh! and Viviera satisfy the soul and lull cravings with burgers, balls and other bites that are based on actual vegetables. 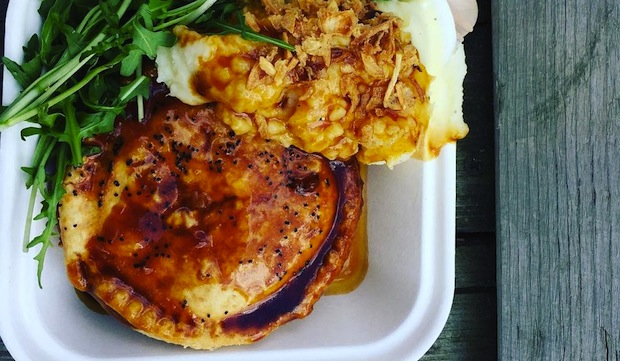 Ever wondered what a traditional pie-and-mash shop would look like if it was invented in the 21st century? Pay a visit to either branch of Young Vegans Pie Shop (in Camden Market and Hackney) and you’ll soon find out. These hip joints serve up proper pie ’n’ mash, but with a twist: dishes here are entirely plant-based. Tuck into vegan takes on steak & ale pie, chicken parmigiana and the odd-sounding but delicious-looking cheeseburger pie, and bulk your plate out with a hearty side, like mac ’n’ cheese or cheesy fries (still vegan!). ‘Is there dessert?’ you’ll want to ask. Why yes! And they’re every bit as devilish as the mains: chocolate chip cookie, apple pie and pastel de nata all feature.

In short, Young Vegans Pie Shop has taken an age-old British institution and given it a thoroughly modern update, making sure the pie shop won’t go out of fashion with our move away from the carnivorous diet. 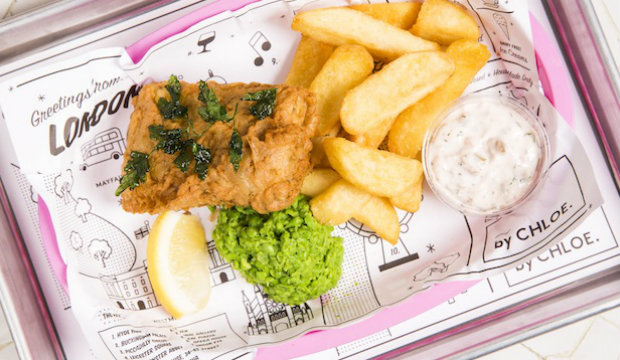 Tofu 'fish' and chips at by CHLOE

By CHLOE in Covent Garden goes further still, and addresses most imaginable junk food cravings in style: the fully vegan menu has everything from tofu-based fish and chips to pancakes and sticky toffee pudding, alongside burgers brimming with nuts, mushrooms and pulses and topped with the likes of guacamole, basil pesto and cashew mozzarella. 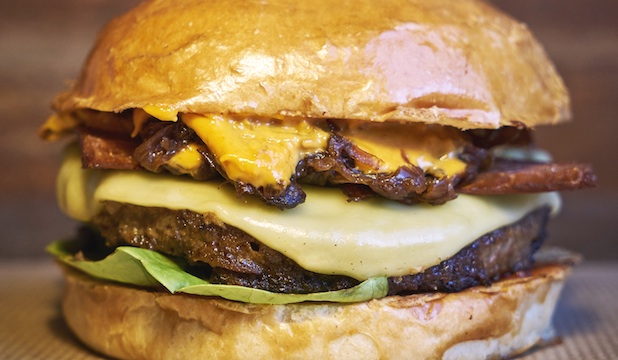 Mooshies in Shoreditch is a must-go for burger aficionados, boasting names such as Fillet-Om-Phish and Magic Mushroom, and playing with ingredients such as pulled jackfruit and nori seaweed that trump processed meat any time. Meanwhile sloppy burger stalwarts Patty & Bun have created vegan versions of three of their most popular burgers: the Ari Gold, Smokey Robinson and Hot Chic. 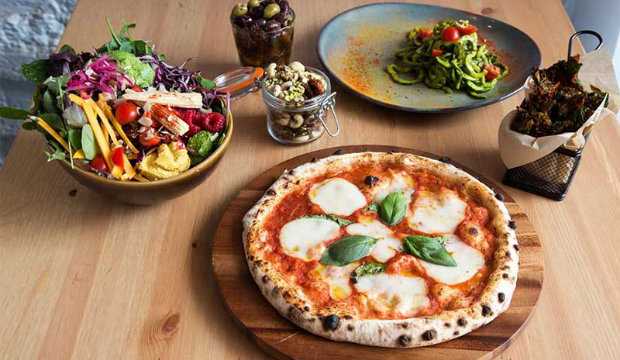 For those leaning towards pizzas, the good news is that vegan cheese is becoming a staple at chain pizzerias; most recently, Pizza Hut hit the headlines with its vegan jackfruit pizza (who said Brexit dominates the news?). But if you’re looking to go beyond the chain experience, then Purezza is your friend. The UK’s first wholly vegan pizzeria has expanded from its hipster heaven in Brighton to Camden, and ups the game with homemade mozzarella (from fermented brown rice milk – it tastes better than it sounds), toppings such as shaved seitan and smoked beetroot, as well as a black truffle base.

If a cheesesteak calzone or an Oreo pizza cannot fulfil your junk food cravings, nothing can – you might even need that green detox juice afterwards. 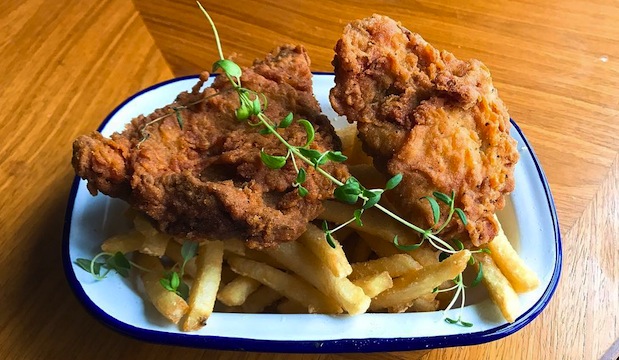 Fried 'chicken' at Temple of Seitan

It's no surprise that vegans crave fast food at the end of a night out, too. Here to cater for our needs is Temple of Seitan, a ‘vegan fried chicken shop’ with branches in Hackney and Camden. The menu features typical end-of-night favourites, from burgers with all the toppings to ‘chicken’ pieces and chips, and popcorn bites. Sides of slaw and mac 'n' cheese also feature on the menu, completing the joint’s Southern vibe. The best bit? It really does look and taste like authentic fried chicken (especially after a few glasses of vegan wine). 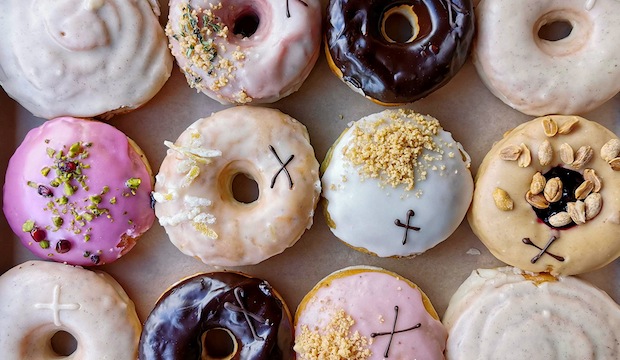 Our appetite for vegan junk food doesn’t end with savoury bites, either. Whoever thought that doughnuts, say, were the reserve of dairy eaters can think again: both gourmet brand Crosstown doughnuts and Doughnut Time, with their stop-and-stare-worthy sugar-frosted window displays, offer a number of vegan options. At Crosstown, these come in the form of their usual sourdough doughnuts with plant-based alternatives replacing eggs and dairy. At any of their shops and market stalls, you can tuck into the likes of a vegan dark truffle or winter fruit crumble doughnut. At Doughnut Time, meanwhile, the vegan menu is practically as extensive as its dairy equivalent. Here, you can enjoy doughnuts filled with Lotus Biscoff spread, creams and gooey chocolates, safe in the knowledge they’re vegan.