TRY CULTURE WHISPER
Receive free tickets & insider tips to unlock the best of London — direct to your inbox
Ever since the 1970s, when they emerged from St Martin’s School of Art and set up home in the then decrepit area of Spitalfields, they have delighted in testing the art world's tolerance. In the 1980s they were subject to shrill accusations of being racist and fascist for using words including ‘Paki’, ‘wanker’ and ‘c*nt’ on their artworks.

Then came the ‘Naked Shit’ pictures in the 90s which included photographs of their faeces and a rallying cry of support for Brexit just last year. Looking at Gilbert & George’s work is like embarking on a genteel roller-coaster. They have survived all the brickbats with non-committal élan. They deservedly won the Turner Prize in 1984 and have recently been elected Royal Academicians. They are chroniclers, not moralists. 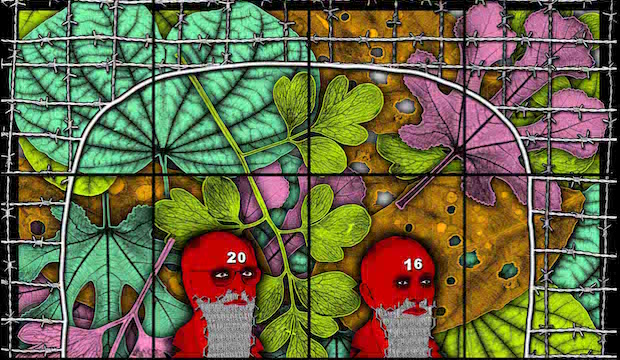 Fifty years later they are still firmly together – Gilbert is 74 and George is 75 – and are still making some of the most provocative art the contemporary art world has witnessed in recent years. To celebrate half a century of working together the eccentric duo are exhibiting a new body of work at White Cube gallery in Bermondsey.

THE BEARD PICTURES depict the be-suited pair (digitally manipulated in bright colours) sporting surreal looking beards made out of an eccentric range of materials, you'll see everything from beer foam to snake tongues.

The British novelist Michael Bracewell, who has written the introductory essay to the upcoming exhibition catalogue, describes THE BEARD PICTURES as 'violent, eerie, grotesque, lurid and crazed. They show a dream-like world of paranoia and destruction and madness. Their strange sickly colours and creeping, smashed up, absurd landscapes confront the viewer with relentless aggression. THE BEARD PICTURES depict a world bereft of reason, in which negotiation no longer exists. [...] Secular and sacred, the throwback emblem of hip millennial youth as well as a mark of religious faith, the beard is depicted in THE BEARD PICTURES as both mask and meaning: a sign of the times.'

The BEARD PICTURES will be shown alongside THE FUCKOSOPHY, a collection of profanities written large on the white-washed walls of White Cube.

Absurd but intensely symbolic, it's Gilbert & George at their best.