A rare display of Thomas Cole’s landscapes have crossed the waters and landed at the National Gallery: it's time for mountain crags, epic vistas and transnational debate

2 CW readers are interested
Review: Thomas Cole: Eden to Empire, National Gallery 4 Review: Thomas Cole: Eden to Empire, National Gallery Anna Livesey
A society evolves from a hunter gatherer world, through a pastoral phase to a remarkably wealthy city. A place of grand architecture and opulence. Look closer and it's clear that this wealth is built upon the loot of Imperialism and this greed sees its downfall as an invading army cuts down its citizens in a bloodbath before the ruins crumble and the land returns to nature.

It's a series of five large and superbly detailed paintings that clearly show Thomas Cole's political beliefs that empires formed on greed and expansion will ultimately fall, and that the pastoral agricultural life is what humanity should aspire to.

TRY CULTURE WHISPER
Receive free tickets & insider tips to unlock the best of London — direct to your inbox
This is Thomas Cole's Course of Empire series and it forms the heart of the Eden to Empire exhibition at The National Gallery filled with Cole's paintings and his fellow landscape painters.

Thomas Cole is best known as a landscape painter of the American wilderness but he was born and raised in Lancashire before emigrating across the Atlantic in his teenage years. The National Gallery has united his work with the British painters that would have inspired him so we can see his work next to great landscape artists such as Turner and Constable.

This is a risky gambit as it could upstage the works of Cole. Luckily Cole is able to hold his own against these greats, which is testament to the scale and quality of his paintings.

Turner and Constable tried to capture the energy of a moment and this exhibition also includes the works of John Martin who projected chaos and destruction on his landscapes. Thomas Cole's approach was largely to let us be awed by the beauty and monumentality of nature – figures in the foreground are dwarfed by the Catskill mountains in the distance. Cole loved the wild and it feels like his paintings were designed to make us fall in love with it too – based on these works he has succeeded.

Alongside this exhibition The National Gallery is also presenting one room of works by contemporary American artist Ed Ruscha. The link being that this series is named Course of Empire after the Cole paintings. Ruscha takes on the modern empire of industrial buildings to show how they have evolved across a series of 10 paintings. Course of Empire is Ruscha’s striking response to the Biennale’s theme of civilisational progress. Displayed simultaneously with Thomas Cole’s famous painting cycle of 1833–36 in the Ground Floor Galleries, its monolithic and almost primeval structures offer a very different approach to the cyclical nature of civilisation.

It's a sign of the times that cities should evolve to what's needed by locals but by focussing on the tops of each building Ruscha keeps a cool distance as if the change doesn't affect him. This detached effect is why his series lacks the punch of Thomas Cole's. 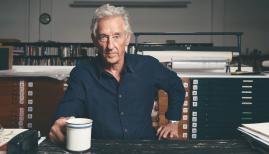 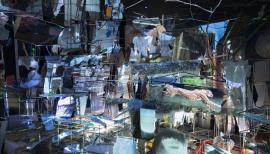 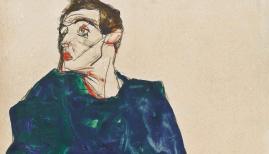 How Egon Schiele and Jean-Michel Basquiat changed the art world forever
Sign up to CW’s newsletter
By entering my email I agree to the CultureWhisper Privacy Policy (we won`t share data & you can unsubscribe anytime).