The best of the permanent museum exhibitions, London

From giant squid and Renaissance chapels, there's a lot more to the best permanent museum exhibitions in London than you might think 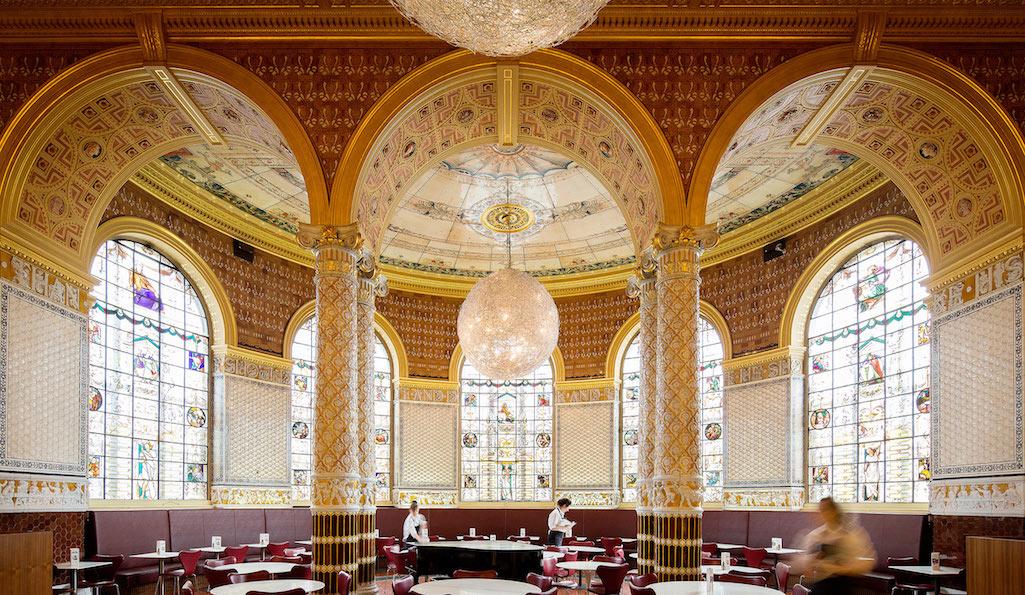 Gamble Room, Victoria & Albert Museum café
So you think you know the Royal Academy, the V&A, the National Gallery? Do you pass a jaded glance over these familiar landmarks, only dropping in for the newest exhibition, seasoned Londoner that you are? Well don’t hurry straight out of the building next time, as we’ve done a round-up of some things in their permanent collections worth sticking around for… 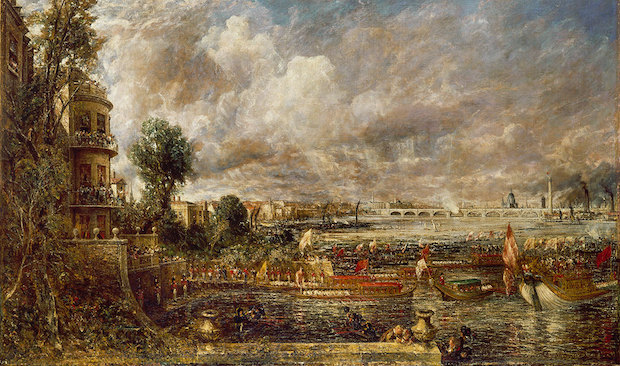 This spring, make a beeline for the Royal Academy London to see two of the greatest works by two of Britain's greatest artistic rivals on display opposite each other for the first time since 1832. Constable's The Opening of Waterloo Bridge (above) and Turner's Helvoetsluys (below), originally painted for the Royal Academy Summer Exhibition in 1832, have been exceptionally re-united for a focused display in the Royal Academy's permanent Collection Gallery (12 Jan - 31 March). Decide for yourself, who should come out on top. 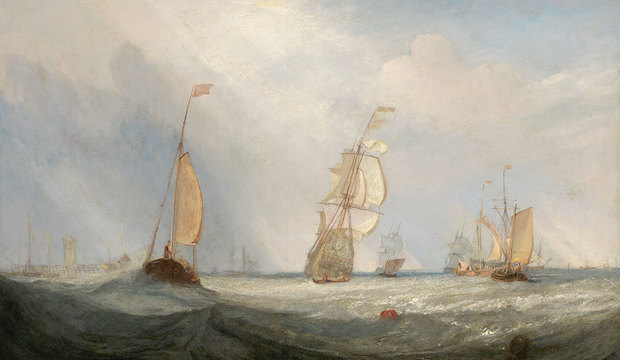 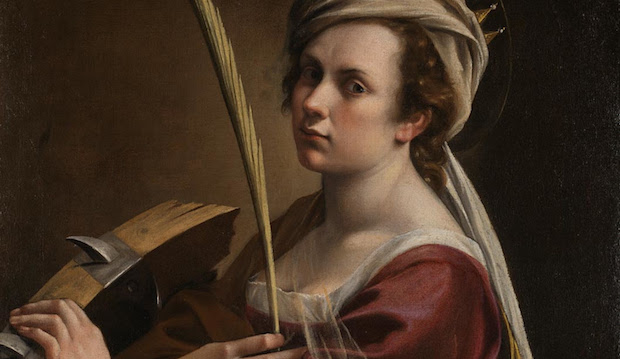 Artemisia Gentileschi, Self Portrait as Saint Catherine of Alexandria, about 1615–17 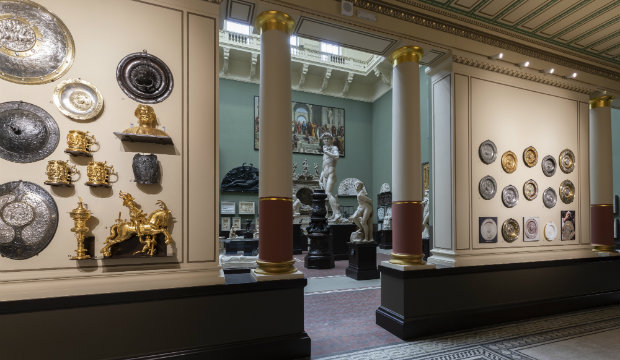 After years of extensive restoration and renovation projects, the V&A has finally reopened its splendid Cast Courts to the public. Highlights of the newly renovated galleries include the awe-inspiring cast of Trajan’s Column, casts from the 16th-century Tuileries Palace, burned down by the Paris Commune in 1871, and Michelangelo’s David.

Although collecting copies and casts fell out of fashion towards the mid-twentieth century, it was one of the only means for those who could not afford to travel outside of the UK of accessing and studying foreign monuments and works of art. The V&A was at the forefront of the nineteenth-century cast collecting craze, building up one of the largest and most important collections of casts and copies in the UK. In keeping with the V&A's longtime ethos of championing education, a spanking new gallery explores the history, processes and significance of casts and copies as well as looking to their contemporary relevance and future in the digital age. 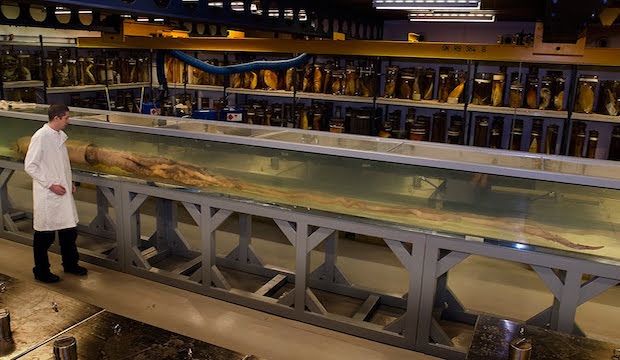 One for Attenborough fans. Hidden in the Darwin centre at the Natural History Museum is a monster from the deep. Although giant squids are still thought of as myth, they do in fact exist. Sightings of giant squid are supremely rare, examples of catching one rarer still. One recently surfaced off the Falkland Islands and was taken to London. That this 8-metre long specimen, affectionately known as ‘Archie’, was caught alive, is nothing short of miraculous. Sadly Archie didn’t survive, but he still lies preserved in his tank, waiting to be discovered. Book onto a guided tour to pay him a visit.

The Jewel Tower, Houses of Parliament 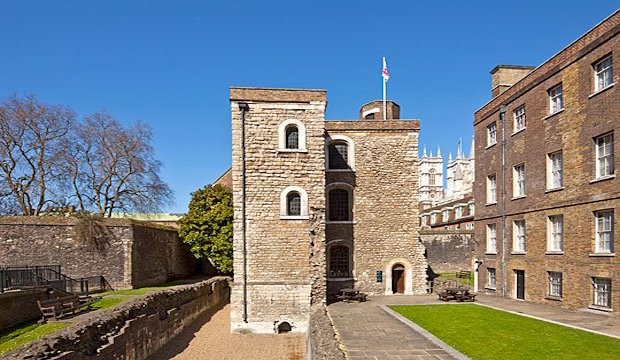 Westminster Hall is famous for being the oldest surviving part of the palace of Westminster, often believed to be the only option for those seeking to transport themselves back to the early days of the mother of parliaments. But just across the road is another relic of the medieval palace, a small weather-beaten building known as the Jewel Tower. It was built in 1365 as a place for Edward III to store the crown jewels, and now boasts a model of the medieval palace and a charming tea shop on the ground floor, the ceilings bedecked with exquisite carvings from the 14th century. 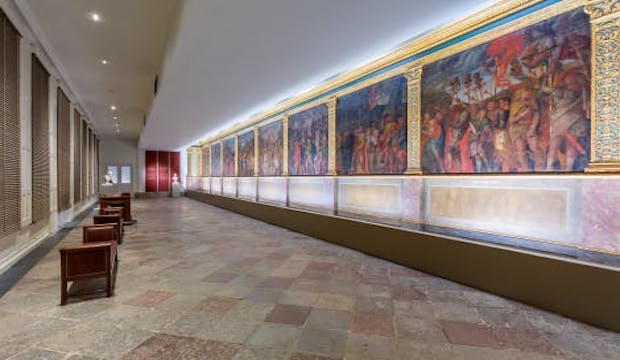 If you liked the Mantegna/Bellini retrospective at the National Gallery, you'll love this little Renaissance gem at Hampton Court palace. Mantegna’s vast mural, ‘The Triumph of Caesar’ is one of the last remaining pieces of Charles I’s coveted art collection still in the country. Nine large paintings depict a classical victory march, one of the finest artists of the Renaissance bringing to life an ancient empire at its height.

Aside from its special exhibitions, the British Museum regularly updates its permanent collections, rotating exhibits to ensure there’s always something new to see. The newest addition are the Islamic World galleries, squeezed into two rooms in the South Wing. Here can be found the story of how a variety of different cultures became a fruitful melting pot, under the unifying umbrella of Islam. Expect a jubilant celebration of the Middle East and West Africa, with some of the most beautiful objects in the museum placed in rooms bursting with flowing arabesques and complex geometry. Highlights include a pair of ceramic Ottoman shoes, exquisitely embroidered Persian kaftans and contemporary work by artist Idris Khan. 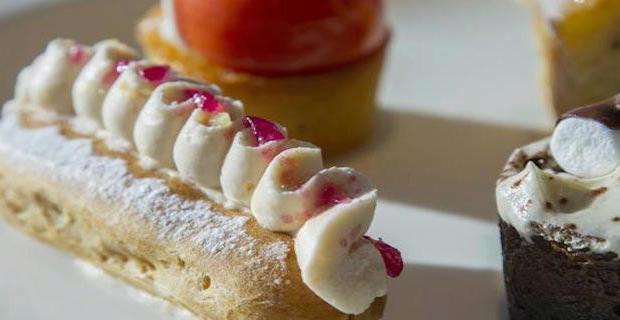 Pricey they can be, but the best museum cafés and restaurants are full of surprises, offering feasts both gastronomically and visually. At the National Portrait Gallery is the Portrait Restaurant and Bar, with vistas that zoom across Trafalgar Square down Whitehall to the Houses of Parliament. The menu boasts sophisticated á la carte offerings of slow-cooked lamb shoulder and south coast lemon sole. Back in 1856 the V&A opened the world’s first museum-café, the décor of its three rooms a sugared extravaganza of Victorian design from William Morris, James Gamble and William Poynter. Authentic Victorian cream teas are served in the Morris room every Friday from 1pm to 7pm. 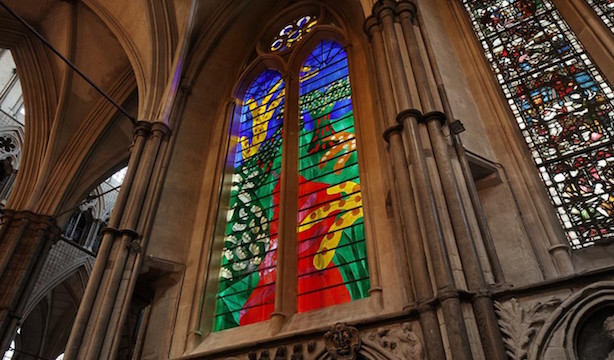 In a corner of Westminster Abbey lies the latest addition to its long history. In October 2018 David Hockney unveiled his take on stain-glass windows, commissioned to celebrate both the Queen’s reign. This scene, bathed in Hockney's typically luscious palette, is of a Yorkshire country road bordered by a hawthorn bush in full blossom. Viewers may be reminded of Hockney's excellent exhibition of English landscapes at the Royal Academy back in 2012.

Pining for a taste of Italy? Something at the V&A may help transport you – a genuine Renaissance chapel, lifted bodily from its home in Florence in the 1860s and transported to South Kensington. Its minimalist classical design echoes Brunelleschi’s famous Pazzi Chapel, so if you want to sample Florence without the crowds and at a fraction of the price, make a bee line for Exhibition Road. 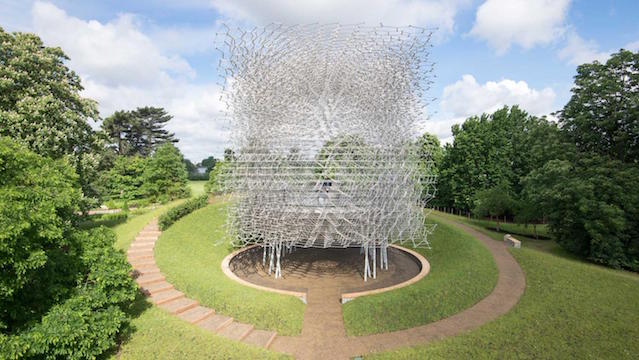 Bees are a chatty bunch, but prefer to use vibrations rather than sound. A new installation at Kew takes these vibrations from a real hive and transplants them into this sci-fi sculpture, a model hive which turning vibrations into sound and light displays. Go at dusk to see it at its best! If you want to have a listen, touch the special 'bone conductors' to eavesdrop on some good bee vibes.

Good news! No more traipsing through Burlington Arcade to see the RA’s contemporary exhibitions. The Royal Academy has finally opened the connecting corridor between its iconic Burlington House site and Burlington Gardens, the Victorian bastion hiding behind it. But it is much more than just a corridor. Its high-vaulted ceilings give it the sense of a sacred space. And in a way it is: the corridor displays relics from the student-days of famous Academicians, along with classical statues which inspired Blake and Turner during their tenure there.

Luckily for you they're not going anywhere, so no rush!