J.K. Rowling worked in Edinburgh cafes, Virginia Woolf, Roald Dahl and Dylan Thomas worked in sheds. Picasso's enormous studio in his Cannes villa was the epicentre of his social and romantic life. Jackson Pollock's is satisfyingly paint-splattered, Duncan Grant's studio is, to this day, full of uncleaned brushes, half-finished sketches, and pictures of his sometime-lovers, Vanessa Bell, John Maynard Keynes and David Garnett.

Now leading Barcelona gallery Mayoral have brought Spanish Surrealist Joan Miro's studio to Mayfair - and the result is quite something. Priceless works of art sit naked and askew on wooden easels, cups of paint in reds and blues lie around. Here a pot of paintbrushes and a rocking chair, there a dried flower and rattan basket; the space has a wonderful informality about it, as though the artist has just popped out for a moment.

Sixty years after it was built by Miró's great friend, the Spanish architect Josep Lluís Sert, the studio has been recreated from pictures taken in the 1970s by Jean-Marie del Moral's photographs and the memories of Miró's wonderfully eccentric grandson (“I remember it exactly, the smell of turpentine and linseed oil, of oil paint and acrylic paints, and hundreds and hundreds of works everywhere"). Miró worked in this space on the island of Mallorca from 1956 until his death in 1983. He had created his dream studio, having lived and worked in abject Parisian poverty, and he produced some of his best known works there. 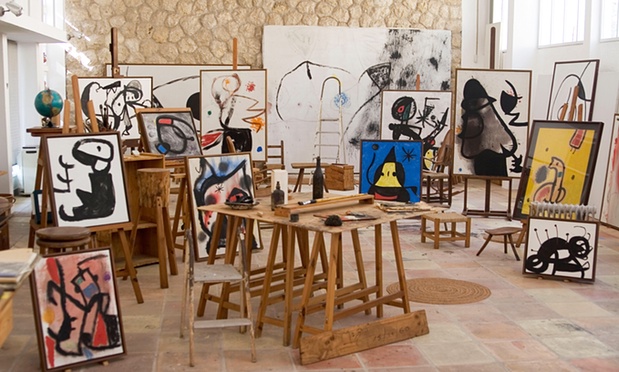 We particularly loved the stone-wall, which Miró instructed Sert to build so that he could feel like a caveman, drawing on the wall of his dwelling, 35,000 years ago. The paint-splattered, tiled floor was a lovely touch, too.

Every splash of paint, ink spill, or desk doodle shines bright with meaning, as we half-see Miró hunched over with a cigarette, or pouring himself some wine. Historic artist studios are precious spaces, but ones that also have a carefree informality; a lightheartedness that offsets the stuffiness of museums, where the art ends up.

Entry is free, but the gallery is small - so you have to book a time-slot, here