It’s difficult to mount an exhibition that captures the spirit of the ‘60s. It’s the most talked-about, longed-after decade of the 20th century. There’s also a great deal of mythology to wade through. Flower crowns, Mick Jagger’s lips ‘n’ hips, the giddy world of psychedelia.

The V&A, though, succeed with their bombastic new show You Say You Want a Revolution – their new examination of the years of 1966 to 1970.

This period was one of the most important in Western social history. The world was shifting. We saw the birth of environmentalism, multiculturalism, neoliberalism, counter-cultures. Youth cultures were born, belt buckles were loosened, black music played everywhere - all shrouded in a cloud of marijuana smoke 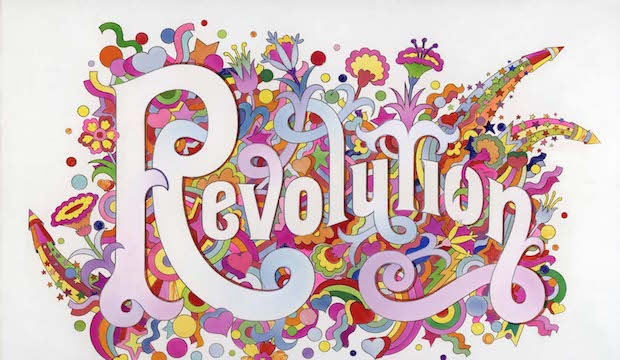 This exhibition carefully balances heavy and light – a canny move – we remember Everything was moving the Barbican’s exhibit of 60’s photography, which felt weighty and overly grave. Twiggy cavorts in Carnaby street; next door, Martin Luther King rings out.

The layout sets the tone. It’s somewhat wacky but incredibly effective. There are mirrors everywhere, which is an intriguing, immersive touch; your reflection becomes part of the show. Quotations are daubed on the walls, there are nooks and crannies to explore, projections on the wall, jiving manikins. The final room - a wide-eyed paean to Woodstock, the 1969 festival which was the pinnacle of ‘hippy’ culture – is carpeted with astro-turf and strewn with beanbags. Visitors can lie back and watch recordings of the performances, which are projected up above. It’s obvious, but very charming.

The highlight - for us at least – was the music. We’re given headphones, and as we wander round, the tracks change according to our locatin. The soundtrack is taken from the collection of the legendary DJ John Peel. You’re reminded of the power of music – to protest, to arouse, to assemble, to inspire.

So You Want a Revolution