This new exhibition is the first all-woman in the gallery's history. But walking through the galleries rooms, you're confronted with a nigh-on total lack of thematic or practical concord. The press release tries to cover tracks, blurting evasively that 'the exhibition will play an important role in approaching issues of the glass ceiling' of the art world. What? How? By plonking works by women alongside one another and pretending they have anything to do with each other, in one exhibition? No. This is patronizing, lazy and cynical. One suspects that this newfound interest in gender equality has much to do with certain details of Charles Saatchi's private life, and little to do with tackling 'the glass ceiling'. Much better, Mr. Saatchi, to make sure men and women are evenly represented in the future.

Nervertheless(es), there's much to enjoy in the way of art. We loved Sigrid Holmwood's depictions of nineteenth century Swedish peasants, exuberantly at odds with their neon colour scheme. The goat hugging woman, for example, is sheer joy. 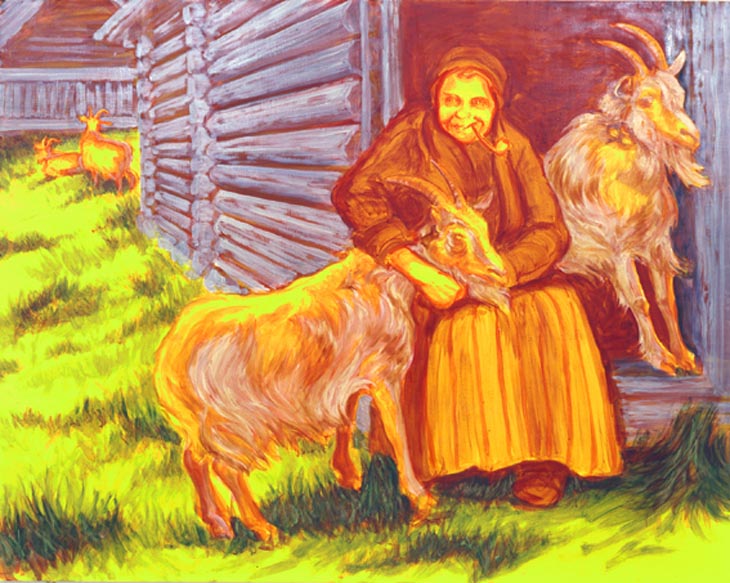 Sigrid Holmwood Old Woman Hugging A Goat 2008 © Saatchi Gallery
Mequitta Ahuja's large canvases in room 4 depict legends and historical events, into which she inserts self-portraits and anachronisms. The resulting paintings are beguiling and mythopoeic, you want to enter the dark blue fields and forests they inhabit.

Alice's large-scale sculptures are hugely expanded objects, mummified in copper thread to create surreal and strangely beautiful objects that could be contemporary art installations or ancient relics. We love the enormous spool of thread, which appears to unravel as you move around it.