1 CW reader is interested
Antony Gormley: CAST, Alan Cristea Gallery review 4 Antony Gormley: CAST, Alan Cristea Gallery review Eloise Barker
Contemporary artist Antony Gormley has always found new ways to present his human form, from the Angel of the North to the cast iron figures populating Crosby beach (Another Place). Whether you think they have artistic merit or not (and some critics have decided the latter), you go to his exhibitions ready to see bodies.

He taps into our human desire to see human forms in everything, from the Turin shroud to his latest show at Mayfair's Alan Christea gallery.

The highlights are huge black woodblocks and life-sized prints of the body, made by Gormley slathering a glutinous mix of crude oil and petroleum jelly onto his own naked body and lying on the canvas.

The Alan Cristea gallery has two spaces - go to the main hall first at 34 Cork Street, before moving two doors down to 31. In the main hall you’re confronted by life-sized oil and woodblock prints.

The effect is dramatic. Levitating in white space, the human form seems bigger than it is.

And the oil. These are oil portraits - but not in the way that Van Dyck or Goya ever imagined them to be. The visual pun isn’t funny: we get an impression of viscous, jaundiced flesh. In each print, a pool of oil collects at the breast bone, leaving a thick glob. 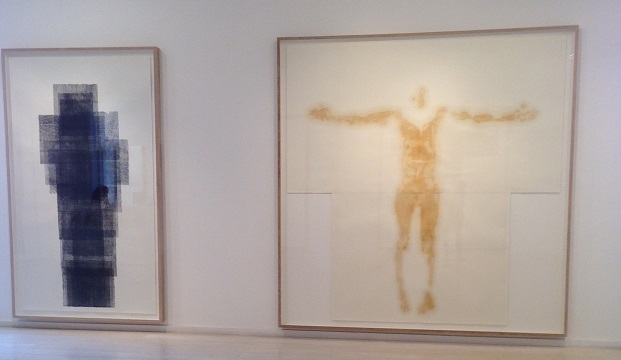 Gormley has always taken a very physical approach to his art, even as he approaches 66, most famously with his full body casts, which look out from famous London landmarks to this day. For these new monoprints, he held on to a pole to lower himself, letting go at a point where it was safe to fall. And then he fell onto the canvas.

The main hall offsets these jaundiced creations with huge black ink woodcuts. These are heavy, dark and contrast with the monoprints, yet share a common process: both are made by pressing weight onto the page.

The woodcuts are an extension of Gormley’s earlier Expansion series, in which he realised a pixelated human form as a series of large blocks. These woodcuts retain the heaviness of the original series. The fine detail is actually created by scraping down ragged plywood with a cheese grater. 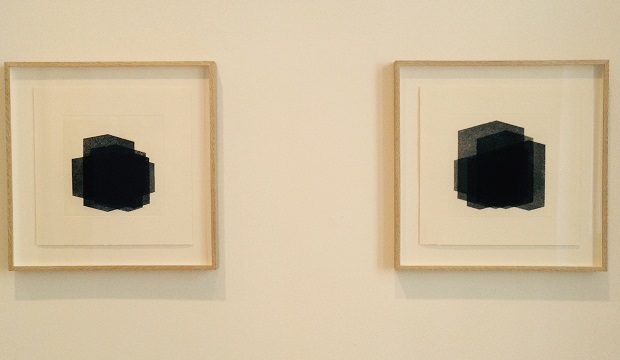 In the other rooms are fine etchings and aquatints. The etchings are delicate tracks on the paper and the figures are trapped in a web of their own lines, “literally spider web intonations of the way that I have been mapping the body” (Gormley).

Despite human mark-making’s prehistoric precedents, oil prints of this kind have not been seen before. Gormley wasn’t even going to make them. This exhibition was originally intended to be smaller but expanded as Gormley added more exciting work, including the monoprints. We aren’t even sure how they will change over time- how oil will sit on paper like this. Those lucky few who can buy one will find out.

The gallery may extend the run of this show into the summer and this is the last major exhibition to be held in the Cork Street space before the gallery moves in October to Pall Mall. Don't miss this great opportunity to see the gallery before it moves.