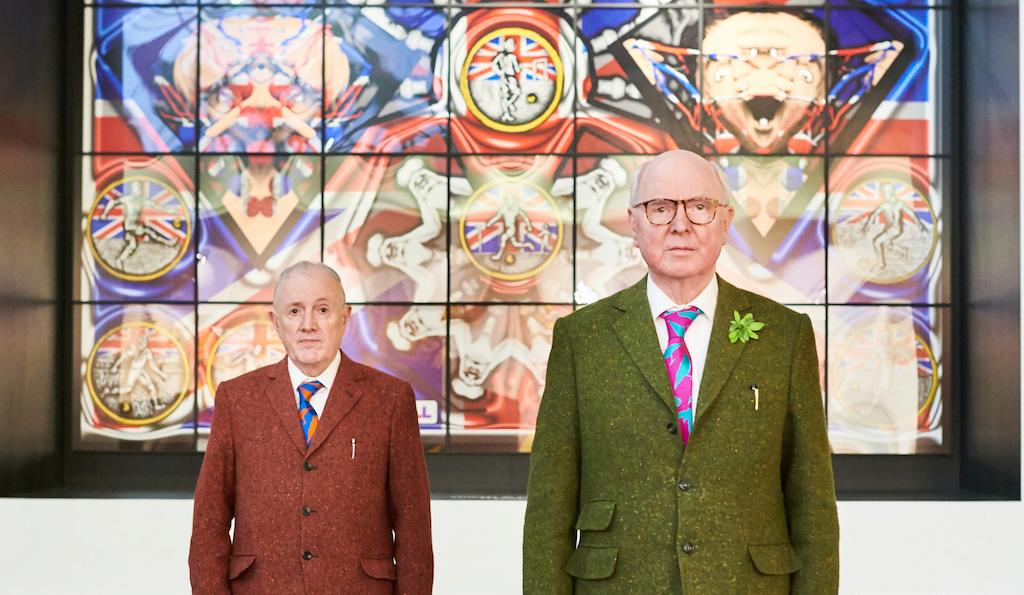 Gilbert & George in front of their work Handball @ BRAFA 2019 © Fabrice Debatty
‘BREXIT, BREXIT, BREXIT, TRUMP, TRUMP, TRUMP, now can we talk about the art please’, says George briskly in response to a probing question about the effect of raising a British flag in the heart of Brussels at such a politically tumultuous time. 'We hope our work will really stand out', he is quick to add.

The maverick contemporary art tricksters Gilbert Prousch, 75, and George Passmore, 76, more commonly known as Gilbert & George, are in Brussels for the opening of the 64th edition of BRAFA – one of the top three multi-disciplinary art fairs in Europe – where they are, rather surprisingly, this year's Guests of Honour. The British flag in question is the main pictoral element of HANDBALL, 2008, one of the five large-scale Gilbert & George pictures on display at the Belgian fair.

They seem delighted to be in Brussels. 'The Belgians are the BIGGEST collectors of art [..] and quite extraoooordinary people', says Gilbert in his thick, drawling Italian accent. 'They really love and accept our pictures [...] unlike Puritanic Americans'. 'You shouldn't say that Gilbert', says George scoldingly, 'we've sold lots of pieces to Americans'. A short squabble ensues. Will Brexit pose a problem to sales then? ‘We’re very optimistic people’, quips Gilbert with a wry smile, ‘nothing will change; everything will just be different’.

Gilbert & George thrive on paradox. For more than 50 years, the art duo, who met at Central Saint Martins as students studying advance sculpture, have explored its thorny realms. They have tackled everything from sexual gratification and morality to social gentrification and multi-culturalism in their glossy photo-montages, always featuring self-portraits at their heart.

Over the years, though, their satirical anti-art, often emblazoned with expletives and symbols referencing social taboos, has outraged, scandalised and, at times, courted controversy. Do they see themselves as provocateurs? ‘Noooo', chuckles Gilbert. 'Are you provoked by our art?' There's an uncomfortable silence. 'We’re just making art that speaks to a lot of different people about a lot of different things,' adds George, smoothing the way. 'We’ve always believed that art is for all'. And now, they tell me, it's for the disenfranchised, too. 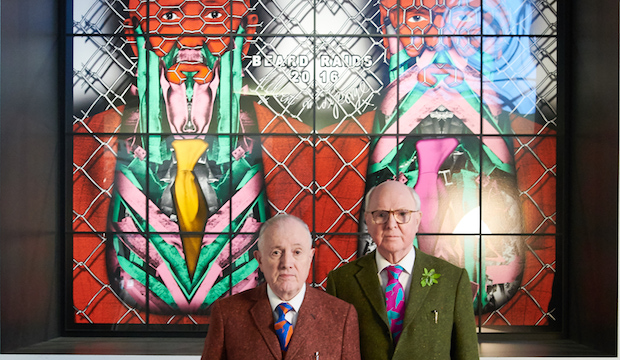 It’s a tough nut to swallow given they are represented by the elite White Cube Gallery and recent sales figures for their work have teetered into million-pound sums. But George is quick to interject: ‘We’re the darlings of the lower-classes [...] All the people we have met on the streets [tramps, drug addicts, labourers] across the world who say they love our art have never even heard of these sales'.

This so-called accessibility has long been regarded a primary pillar of their practice. ‘Absolutely it has’, chimes in Gilbert, ‘it’s why we insist on printing cheap, beautiful catalogues and cheap posters during our exhibitions’. It’s also apparently why they love staging big shows in museums. ‘In museums we can meet and speak to ordinary people and reach new audiences’, says Gilbert earnestly. ‘We like to think of each one of our pictures as a visual love letter from us to the viewer,’ concludes George.

Art as messenger vehicle is not a new concept. But Gilbert & George have exploited its powers without shame, reserve, and certainly without fear for decades now. It seems no topic is off limits – save the environment that is. ‘We always say f*** the planet’, George says firmly when asked, a glint in his eye. Well, that may be, but life on planet earth and, in particular, around Fournier Street in the East End of London has long pumped their creative life-blood. 'We discovered art walking the streets of London and we became art walking the streets of London’, says George. 'We still truly believe that [London] is the greatest success of our world', adds Gilbert, 'it’s just extraoooordinary'. 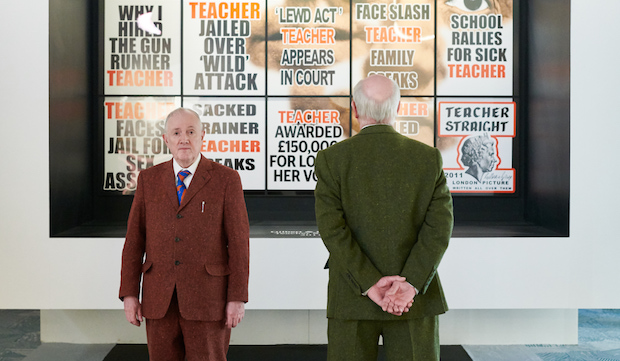 Given their global reach and phenomenal success, it’s hard to believe that Gilbert & George have lived and worked around Spitalfields Market since graduating from college in 1968. Evidently, much has changed since then. Do they feel nostalgic for a lost time? ‘Not for one second’, replies Gilbert. ‘We always say change is progress, even if it doesn’t feel like it at the time’, interjects George.

So, what’s next? Well, the Gilbert & George Centre, a non-profit foundation off Brick Lane boasting three galleries in which the duo will display their own work and that of emerging artists they admire (apparently in a strategic throwback against Tate Modern which, according to them, does't exhibit their work frequently enough), is set to open later this year; and a string of major exhibitions and gallery shows around the world are in the works. 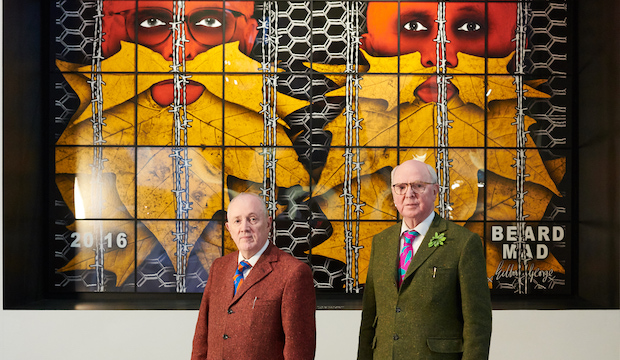 Despite more than 50 years in the spotlight, Gilbert & George remain impossible to classify. They still go to the studio most days – remarkably, they only have one studio assistant – eat in the same Turkish restaurant when in London; wear their trade-mark tweed suits and vibrant, patterned ties; tramp the same London streets they so love; and charmingly churn out the same rehearsed content to press day after day. What they say and do is, of course, as much a part of their art as the pictures themselves: they are 'living sculptures' after all.

So, what's it really all about? ‘Feeling life', George says matter-of-factly. ‘That’s what our art is all about. When we do go to the studio, we never go with ideas or plans. We try to go empty headed, blind, deaf, zonked, so how we are feeling as people in that exact time is how our art is [...] our art has to be lifted out from our emotions inside ourselves'.

For Gilbert & George making art is liberating; it’s about 'throwing off chains', having the opportunity to say exactly what they feel and offering up opportunity for change. It all sounds a little self-indulgent. ‘Not at all’, concludes George, ‘we’re not making art for ourselves; we are not selfish artists like that. We’re making art for the viewer'. 'Art is an extraordinary freedom, and we celebrate that', adds Gilbert. They might just be the most unfathomable, established, anti-establishment artists on the planet.

What do you think makes a Londoner?

Gilbert: I think a Londoner is a person who accepts all; a Londoner is an extraordinarily liberal person, more liberal than any other person in the world.

Who is the most iconic Londoner?

Gilbert & George: The Queen is the wealthiest. But maybe Prince Harry. He did a lot for people with red hair.

Spitalfields Market. It’s the most representative place on earth.