We review Upstart Crow, BBC Two's raucous new sitcom based on the life of Shakespeare, as played by David Mitchell 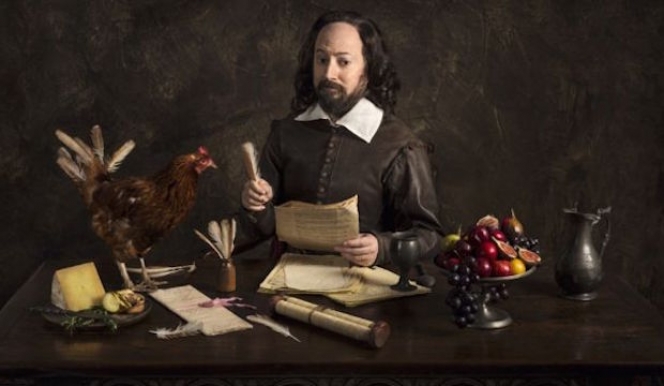 Playing Shakespeare: David Mitchell stars in BBC 2's Upstart Crow
He's the man that launched a thousand tributes, countless revivals and the core of the national curriculum. So is it intimidating playing Shakespeare?

'It would be more daunting to play James Bond', quips David Mitchell when asked about his latest TV role.

The Peep Show actor and comedian is playing William Shakespeare in a new series penned by Blackadder writer Ben Elton. Upstart Crow is a big studio sitcom about the Shakespeare's life. It's a much mythologised and scrutinised subject, more so than ever in the 450th year since the bard's death, but dry academic musing this is not.

With the same droll take on British history that makes Blackadder so beloved, each twenty minute episode does away with any deification to portray Shakespeare as a harangued husband from the midlands who suffers relatable commuting stresses, albeit with donkeys. He's juggling life in Stratford-Upon-Avon with a wife (Liza Tarbuck) and daughter (Helen Monks), who aren't the slightest bit charmed by Shakespeare's floral 'wherefore art thous', with London thespian fame.

The mighty literary legacy is still at the heart - and episodes use the familiar play plots as a foundation for broader comedy. The first spins a ridiculous yarn around the writing of Romeo and Juliet and we've been promised a first series that references Merchant of Venice, Twelfth Night and even The Scottish Play. There are plenty of in-jokes about syntax and sonnets and to tickle the literati. Theatre buffs will particularly enjoy the portrayal of Will Kempe, Shakespeare's legendary leading man, with mannerisms borrowed from Ricky Gervais.

But you don't need a scrap of Shakespearean knowledge to laugh along with the baser, bawdy elements of the humour. Fart humour, some on the nose gags about 'rogering dead animals at university' and a splash of kitchen sink comedy make Upstart Crow laugh-out-loud funny. And, somewhere in the mock-Elizabethan pentameters backstage antics, there's a timeless glint to the comic set up: 'so many sitcoms are about the worries and hopes of the middle class,' David Mitchell explains, 'and that where this story is rooted'.

Upstart Crow airs on Mondays at 10pm on BBC Two