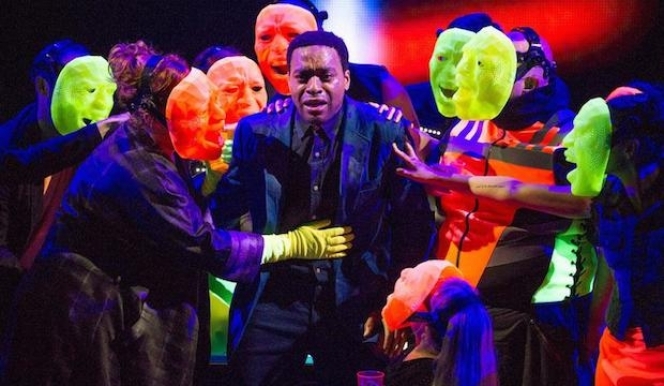 With a peacock's pizazz, Norris has certainly begun with a bang. It's as ambitious and bold as we'd hoped. A spectacular riot of colour, music and experimentation, mingling echoes of the 15th century heritage with a slick modern aesthetic (disco tunes played on a hurdy-gurdy). Actors are suspended in the air, a tsunami engulfs the entire auditorium -- and the production feels like a showcase of what can be done with a big budget and bigger imagination.

While impressive, such bravura displays also compete with the core of the Everyman fable and left us feeling strangely disconnected. Carol Ann Duffy's febrile free verse swings from lilting alliteration to blunt, abrasive couplets ('birfday bash/ I need a slash'). Her god is, of course, a woman and quips from the lesbian sister will make literary spectators titter. But among moments of brilliance, the script has flat pockets of cliche.

'Everyman living only for his pleasure' is played, with the seamless skill you'd expect, by Chiwetel Ejiofor. A hedonistic banker with commitment issues and a blasé attitude to family, the character is neither allegorical nor relatable. Attempts to be young and hip were stylised beyond recognition and a touch patronising -- oversized lines of cocaine, loutish chants of 'Happy f***king birthday' from 'mates' who seem to have lost their way en route to a warehouse rave and found themselves at a City Slicker's 40th. Is it meant to shock? If there are a few audience members that find it revelatory or offensive, we suspect that there will be more rolling their eyes.

When death visits and tells Everyman he must meet his maker, Ejiofor makes a valiant effort to bring out the humanity of the story as he reconciles his lifestyle. With the foundations of the original play -- fellowship, kindred, goods and knowledge -- elegantly evolved to reflect 21st century life, Everyman's message is no surprise: however smart, rich or popular you are, death will equalise. Penny Layden is vivid and stark as knowledge, asking 'what does it mean to you to be a human being' to not just Everyman, but the audience. By the time we got to the intimately written revelation of Everyman's soul, called out frenziedly by a chorus of senses and sensations, we were a bit indifferent to his plight.

Everyman is an exhilarating experience that's certainly worth seeing, but fundamentally the force of the play is lost. The plight of the everyman and its morals neither made us feel culpable nor provoked us to consider our own lives. It is fitting that the spirituality is suffocated, but this flashy reworking lacks the humanity to take its place. Whether you take the life lessons as trite or tongue in cheek, they remain abstract.

Everyman is at the National Theatre until 21 July. Click here for more information and to book.