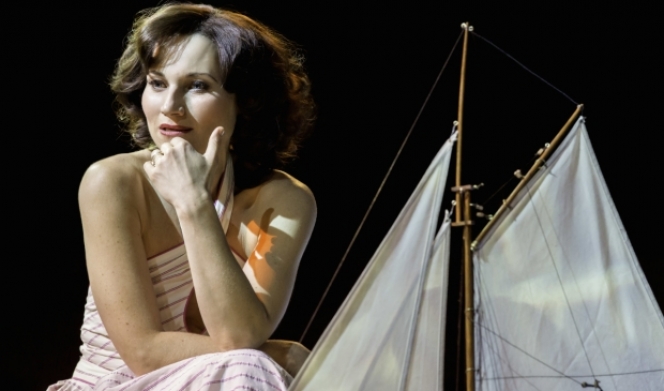 Kate Fleetwood as Tracey Lord, High Society
Who wants to be a millionaire? This vivid, vibrant production of High Society will certainly make you feel like one.

It's the wedding of the year and the rich, elegant Lord family are preparing for one hell of a party. But no amount of Tattinger call dull the sense that the groom is a dud. And it's more than just hangovers that threaten the harmony of the upcoming nuptials.

The Hollywood glamour and the luxury of Oyster Bay are brought to life with such detail you can smell it. A barbecue breakfast by the beach comes with the aroma and sizzle of grilling bacon, champagne flows, maids and butlers bustle through the aisles and the in-the-round stage invites us all to be a part of the action.

Jazz aficionado Joe Stilgoe sets the precedent for a show filled with surprises and flourishes by opening High Society with a singalong improvisation session on the baby grand piano. We were calling out requests, joining in and grinning from ear to ear. And we didn't stop smiling once.

The story of an imminent society wedding is beautifully paced, with breathless chorus numbers punctuated by the bubbling humour of family life and flashes of raw emotion. Award winning choreographer Nathan M. Wright masterminded the movement for Moulin Rogue and brings the same absorbingly festive atmosphere to the stage; the grand party scene of the second half is a jubilant medley of ensemble numbers complete with flawless jazz duets and tap dancing atop not one but two grand pianos. Without the distance of a raised stage, we were immersed in the hijinks and misbehaviour.

But the show is more than just fizzes of fun, and director Maria Friedman lives up to her musical theatre expertise by drawing out a plot just as engaging as the songs. Aloof bride-to-be Tracey Lord (Kate Fleetwood) finds her own high standards destabilised by the arrival of her obnoxious ex-husband C.K Dexter (Rupert Young) and then a pair of gossip columnists looking to uncover family secrets.

Playing a part made iconic by Grace Kelly is daunting but Fleetwood tackles it with aplomb. Her Tracey is just as beautiful, with bouncing curls, razor cheekbones and flouncing skirts, but she's also hilarious; first all droll, cutting quips, then, after copious champagne, infectious silliness. The double act with kid sister Dinah, played with style and spunk by Ellie Bamber, is fabulously funny and exaggerated just enough to show the cynicism and self-awareness behind the privilege. Then, in a pared back duet of 'True Love' with Dexter, the quality and emotion of the singing moved us to tears.

High Society feels like a five star show, but is let down by patchy attempts at American accents. Yet the mood and magic of the musical are so infectious that it almost doesn't matter. It's been a long time since we felt so uplifted after the theatre.

High Society is at the Old Vic Theatre until 22 August. Click here for more information and to book.