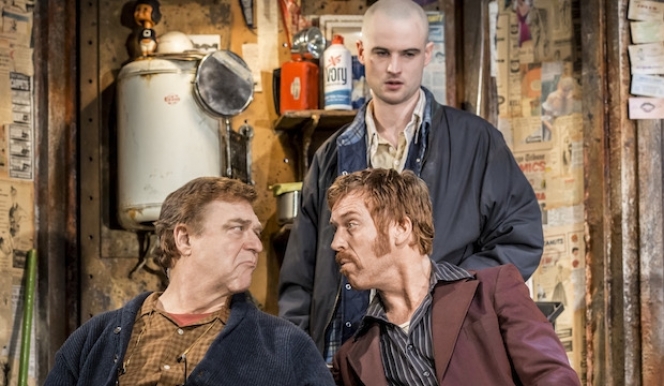 American Buffalo cast, photo by Johan Persson
American Buffalo is typical David Mamet: a taut three-hander that's all talk. The dynamic between the have-a-go-hustlers is testosterone-heavy, meaty and littered with expletives. Action is sparse and the characters are dissatisfied outliers of the American Dream.

This revival brings the shabby clutter of a Chicago junk shop to London with loving attention to detail and the stylish touch of assorted Americana suspended from above, penning in a claustrophobic stage. Within this shop interior we see the rhythms of everyday life, full of gripes over money lost in poker and what to eat for breakfast. But when the titular American Buffalo, a 24-karat bullion coin minted in 2006 by the US government, gives a chance to make a quick buck, a convoluted plan emerges, warps and collapses.

John Goodman, superbly cast as long-suffering shopkeeper Don, negates a contradictory mixture of self-seeking ambition, caution and sympathy as he is persuaded to evolve his petty criminal plans and replace the dopey sidekick Bobby with smooth-talking Teach. His expressiveness ekes out the comedy between the lines, and as the only American on stage, Goodman's natural cadence makes Mamet's script feel the most vivid.

Already under the spotlight thanks to a starring role in Far From the Madding Crowd, Tom Sturridge as Bobby holds his own on stage, keeping the spacey slur just subtle enough to leave us guessing over his sobriety. And while there is plenty of humour, there is nothing parodic about his portrayal of a recently recovering addict; vulnerability and pathos stay close to the surface.

But Damian Lewis steals the show. Oozing seventies sleaze with a flared burgundy suit, handlebar 'tache and sideburns, he masters the gift of the gab. As the charismatic but usurping Teach he has not just the characters but the audience eating out his hand.  And for all the flashiness, Lewis also reveals underlying insecurities. All the insidious self-promotion and confidence in talking down others is offset by a deep discontentment, conveyed in a rare moment of wordlessness and flash of frenzied action.

Daniel Evans's direction brings out the layers of humanity in Mamet's dialogue to render each character each compelling and convincing. Impeccable comic timing raised enough laughs to punctuate the static setting and stream of speech.  But while there was touching tenderness between Don and Bobby (with a whiff of homosexual longing and Daddy-issues respectively) the overall effect of the play is more amusing than moving. American Buffalo doesn't quite get under the skin, but it does deliver stellar performances and just enough comedy and tension to be gripping.

American Buffalo is at Wyndham's Theatre until 27 June. Click here for more information and to book.