Arthur Miller's classic is made freshly devastating in this flawless RSC revival as it transfers to the West End, says Lucy Brooks. 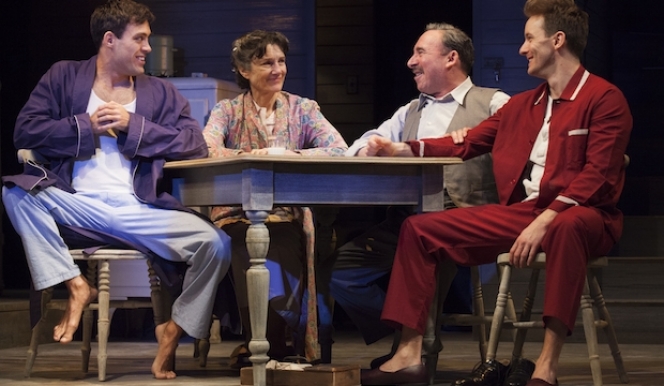 Review: Death of a Salesman, Noel Coward Theatre [STAR:5]
In the centenary year of his birth, American playwright Arthur Miller is as pertinent as ever with two stunning revivals on the London stage. First there was Ivo Van Hove's visionary reworking of A View from a Bridge (which finished its West End run in April) and now the RSC's Gregory Doran has brought his production of Death of a Salesman to London after it caused a stir in Stratford.

While Van Hove put physiological intensity in the spotlight with a filmic dislocation, Doran's production is faithful to spirit and time of Miller's script. But under his sensitive direction, and thanks to astounding performances, the characters are so alive and compelling that the demise of travelling salesman Willie Loman has fresh resonance.

We see him aged 60, prematurely exhausted from years of selling. With two grown up sons and a mortgage that's almost paid off, Willie is caught between domestic duty and bitter disappointment. Tormented by long gone promises of greatness, he becomes preoccupied by the idea of death.

Though it doesn't take a literary critic to tell you that the suffering of the ordinary man in Arthur Miller's script exposes a toxic American dream, this production expands the tragedy. It may not be the most experimental revival, but RSC Artistic Director Gregory Doran brings a Shakespearean strength to the love, betrayal and madness. When shrunk into a quotidian family, this is intensified instead of diluted.

An authentic and effective set evokes urban claustrophobia. Lighting denotes shifting time frames and the live jazz interludes imbue an increasing sense of dreaminess. The tricky shifts into memory and fantasy as Willie loses his grip on reality, feel seamless. The play's original title was 'Inside his head' and the subtle intertwining of past and present makes his regrets haunt the audience as much as they taunt Willie.

It's not much of a surprise that stage stalwarts Harriet Walter and Anthony Sher shine. These are two actors at the top of their game. Under the direction of his longterm partner Gregory Doran, it never feels as though Sher is performing. His Willie Lomax is the essence of the everyman, and he makes the complex character a recognisable part of us all.

Weariness and disillusion thicken his voice. The big talk and promises of the salesman govern even his physical presence as he punctuates grand plans with emphatic and performative arm gestures. Sher draws out Willie's complexities and contradictions with incredible breadth: volatile but weary, hungry for the next dose of hope but tragically aware of his own shortcomings, desperate but somehow dignified. The play is bitterly funny and Sher is the driving force of the humour.

As long-suffering wife and mother Linda Lomax, Harriet Walters teeters between admirable strength and utter plaintiveness. Her unwavering devotion to Willie could easily alienate modern audiences, but Walters transforms the sad suburban marriage into an epic romance. It was her raw but controlled speech to her son -- "he’s a human being, and a terrible thing is happening to him" -- that triggered a stream of tears (which didn't stop until the last applause.)

With broad bronzed shoulders and a mega watt smile Alex Hassell's Biff is a caricature of American clichés. As we flit from his father's memories of a promising teenager back to a 34-year-old who is still trying to find himself, the athletic physicality and confident presence crumples. With the climactic discovery of his father's betrayal, Hassell captures the shattering of innocence with an open, childlike horror that hardens into stony silence and adult cynicism.

This tender, deeply moving revival removes any sense of datedness or abstraction from the play: the fickleness of capitalism, stifling pressure to succeed and ambivalence around mental fragility are just as devastating today. We were laughing through tears. We had to stifle howls of anguish. And we happily would go through it all again.

Death of a Salesman is at Noel Coward Theatre until 18 July. Click here for more information and to book.