Diana Vishneva Review: On the Edge ★★★★★

Diana Vishneva, London Coliseum: the Russian ballet star is a force to be reckoned with, even if this contemporary programme didn't show everything she's got. 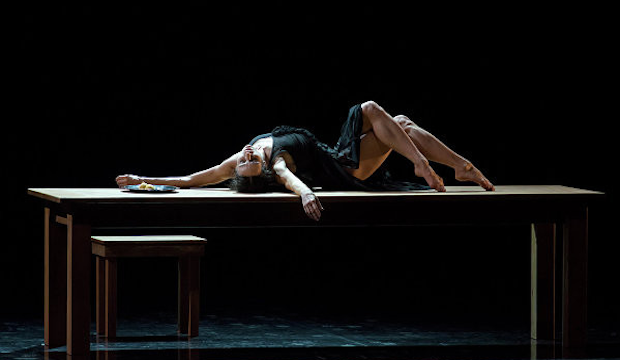 Diana Vishneva in Woman in a Room, courtesy bolshoyrussia.com

Coming to the far edge of a sparkling career in classical ballet, Russian star Diana Vishneva is testing the waters of a new path in contemporary dance.

There was little doubt about the question, but Vishneva proves herself supremely equipped for whatever transitions lie ahead, her famed sense of drama and knife-sharp technique unwavering.

What might need more honing, though, is her selection of material. The two works of the night’s programme, one from Jean-Christophe Maillot, and another from Carolyn Carlson, couldn’t have asked for a dancer who better embodies their themes of the loneliness of the great artist, or the bit-champing boredom of isolation. But Vishneva was scratching at the edges of the movement, able to give far more than it allowed.

Jean-Christophe Maillot: an artist's choice
Against a stylishly noir set featuring only a chair, couch and ballet barre, Jean-Christophe Maillot’s Switch puts Vishneva in darkly luminous silver before a sleek couple. She fights for their attention, and they are captivated by her, a toy they want to play with, a flame they want to touch. Drawing them in and sparking with rage when their attention wanders to each other, she is all fire and sensuous power. Once in their hands, she falls limp with a choreographic mew, suddenly tiny in her gratitude for their affection.

But their interest wanes and returns to each other, and the artist is left to twine around the tools of her trade, alone with her pointe shoes and barre.

Gaetan Morlotti and Bernice Coppieters, both of Maillot’s own Les Ballets de Monte-Carlo, struggled to keep up with Vishneva’s articulate limbs and racing musicality - she is as much an outsider in skill as in plot.

The ‘Art or Life’ question at the heart of the piece is an over-asked one, and the cliché was more noticeable thanks to rather uneventful choreography. But what Vishneva brings fresh to the table, with her thirsty drama and muscular performance, is the dilemma of an artist particularly well suited to life.

Vishneva’s skin stretches with the desire for life, the experiences she might have in the realm inhabited by the couple. The renunciation of it for art is in her hands not only painful but unnatural. The lonely artist entangled in the barre is a beautiful symbol, but we miss the thirsting creature of before.

Woman in a Room
Carolyn Carlson’s Woman in a Room is a much more nuanced affair, inspired by Virginia Woolf’s A Room of One’s Own.
Trapped in a room, the wind moving in a tree outside a window, Vishneva crushes herself against a table. Her legs swing whimsically, then race as though pacing for escape.

She dances as though unchoreographed, flitting between moods with no external influence to direct her. She changes her dress for a chiffony black gown, toys with stilettos and struts about the room, then swaps into a colourless shirt in which she wafts with indecision and nostalgia.

Restless and whimsical, Vishneva dances loose steps and long arabesques. The final sequence descends a little into awkwardness, as the beaming star tosses lemon halves to a clapping audience, but she is serene throughout.

And why not, as there’s plenty to smile about. This may not be the most flawless launch of a contemporary career, but it’s certainly confirmation that Vishneva has many years of stardom yet to come.