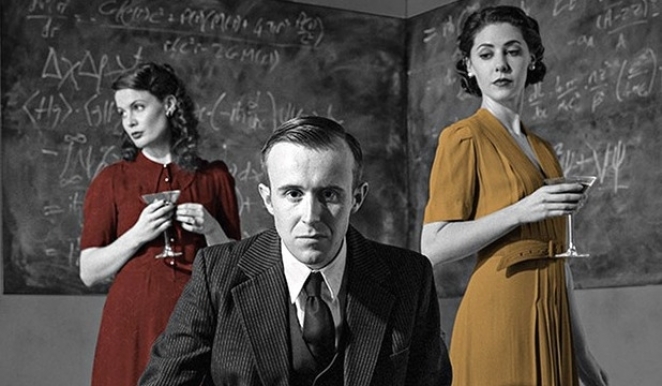 Review: Oppenheimer, Vaudeville Theatre [STAR:5]
Disco balls and the atomic bomb
After an explosive premiere at the RSC, Oppenheimer careered into London with storm of 5 star reviews and a far darker subject than the average West End show.

But, despite its serious core, Tom Morton Smith's play weaves the glitz and jazz of underground communist gatherings effortlessly into the midst of the academic scrawl and enquiry at the heart of the Manhattan Project.

One moment we’re watching a rambunctious boozy party unfold, the next the cast have thrown themselves on the floor to chalk out equations under Oppenheimer’s tutorship. Surprisingly, there is little friction between the two. Thanks to Scott Ambler’s slick choreography and playwright Tom Morton Smith’s fluid and scrupulous pen, these two distinct moods work together to exhilarate and enthral.

Beyond the entertainment value, Morton Smith’s play has something bigger to say about the sheer value of theatre as a platform for the potentially forgotten, but ever pertinent stories that are at risk of gathering dust in our history books. A particular triumph at a time where nuclear power and atomic weaponry remain prevalent subjects.

Oppenheimer, RSC : A hero of tragic proportions
As J. Robert Oppenheimer, John Heffernan is luminous: the cold, iron core of the man is brought alive by his charisma and presence. It’s clear that “Oppy’s” (as he comes, affectionately to be known) intellectual brilliance is only part of the compound that makes him viable as an incidental manufacturer of death: quickly the genius scientist morphs into a sensation, a duplicitous lover, a personality, ultimately, a deeply flawed, eponymous hero.

The final soliloquy works to devastating effect. Heffernan delivers it with an extraordinary bout of spit, sweat and recognition that quickly reminds us of the play’s starting point: it is, after all, a production born out of the Royal Shakespeare Company.

In Oppenheimer, Morton Smith has mastered the creation a tragic hero, a feat that comes from his participation in workshops at the RSC and observance of the Greek chorus and the construction of Shakespearean soliloquies. As a result, this is an electrifying piece of theatre that resurrects one of the 20th Century’s most monumental minds through an epic drama. When the curtain falls, the applause is welcome relief and as its structure and birthright prescribes: this is the kind of story that will make you feel precariously, acutely alive.

Not only is Oppenheimer one of the most exciting shows you'll find on the West End, it's also a breakthrough for playwright Tom Morton Smith, who's made his name in fringe theatre. A star is certainly born.