Review: How I Learned to Drive, Southwark Playhouse ★★★★★

Arrestingly alive and bitterly funny, this fragmented and disturbing coming of age tale will get under your skin, writes Lucy Brooks 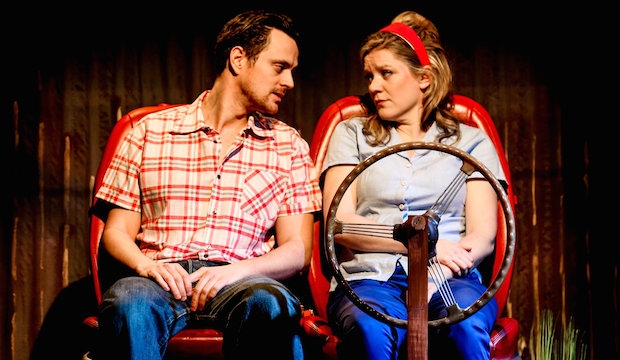 Yes, the subject-matter is almost unbearably bleak, but this bitter taste sharpens the humour. How I Learned to Drive is laugh-out-loud funny and the knowing comic interludes unravel not just an unsavoury relationship with a predatory uncle, but also dysfunction from every aspect of family life.The funniest moments come from the chorus: three generations of women discussing sex in the kitchen; a mother's guide to drinking; a family meal so harrowing it's hilarious. Bryony Corrigan and Joshua Miles sustained whip-quick timing and a flair for physical theatre, while Holly Hayes begins as comically candid, but hardens to a mother so callous there was an audible audience gasp.

There are pitfalls in having a grown woman play a child, and played by lesser actress Lil' Bit could veer into unsympathetic parody. But Olivia Poulet switches between innocence and self-awareness seamlessly. She's so vivid that you warm to her immediately and stay absorbed until the last, heart-wrenching scene. Through recollections and reflections, Poulet as Lil' Bit is the eyes through which we experience the story, and her faultless performance is the driving force of the show. Alongside her, William Ellis as Uncle Peck impresses with an intensity that is as charismatic as it is repulsive.

Only a few tiny touches betrayed how astoundingly young and fresh the creative team behind this revival of How I Learned to Drive are. A red hairband, used as a device denote the jumps between the young Lil' Bit and her grown up self, felt a bit student theatre. Ditto the white face make-up on the chorus. But these were negated by the intelligence and verve with which this tricky script was brought to life. Katherine Heath's in-the-round stage design gave a dynamism while still keeping the interior of the car as the show's beating heart. Rock 'n' roll music and exerts from Drivers' Eductaion tapes punctuated the drama elegantly. And at just 22, director Jack Sain showed formidable talent and insight in his handling of this weighty, poetic script.