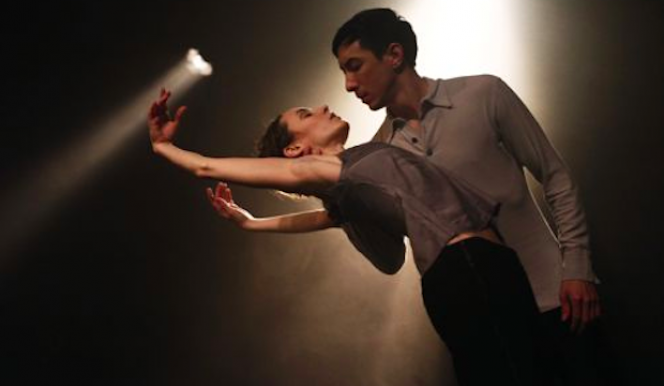 Anne Plamondon and Peter Chu in A Picture of You Falling
Kate Prince and Tommy Fran: Smile **
A comedian’s capacity for extremes has always intrigued audiences, the darkness many seem to harbour striking discord with their public personas. These are the depths plumbed by Kate Prince and Tommy Franzén in Smile, an attempt to show a private, and much more miserable, side of Charlie Chaplin. On paper Smile promised great things: Tommy Franzén has a great nose for character to go with his hip hop moves and Kate Prince’s directorial eye has sent shows to the top. But the results were disappointing. Everything relied too heavily on Franzén’s cheeky chappie persona, and the portrayal of Chaplin’s inner turmoil was reduced to a change of music and dimmer lights. When Franzén did get in a few Chaplin-esque steps they brought the Little Tramp vividly to life, but dancing was thin on the ground and comic timing uncomfortably lacking.

Hofesh Shechter: Barbarians in Love ***
Hofesh Shechter’s new work was a more satisfying start to a trilogy of works both Prince and Shechter have lined up for 2015. Hunched, jerky, sullen movements snap into courtly postures to the baroque score until the piece is spliced by an interview with Shechter and a Siri-like voice. He talks of a search for innocence and confesses to infidelity. The dancers embody Shechter’s weird vocabulary so supremely they add a sense of coherence to a piece whose meaning is otherwise unclear, and the final image of them, still and in varying degrees of nakedness, is a striking one.

Crystal Pite: A Picture of You Falling *****
But it’s Crystal Pite’s duet that makes this evening worthwhile. Taken from a longer work, A Picture of You Falling explores a relationship - dissipating or consummating, it’s hard to know - from the many angles of memory, flashback and description. The couple replay and get caught in lines of a text that are read throughout like a story read to children. Skirting around a semi-circle of spotlights, the dancers vanish and reappear under trapping beams of light, only to brush past one another, unaware, in the centre of the stage. It’s a profoundly poetic work, Pite’s choreography as articulate as the clipped tones of her soundtrack.

Pite’s associateship at Sadler’s Wells promises more access to her work than previously enjoyed in the UK and, if this evening is anything to go by, London is in for a treat.