Selma review: movie about Martin Luther King's march to freedom has moments of brilliance, and stunning performance from David Oyelowo. 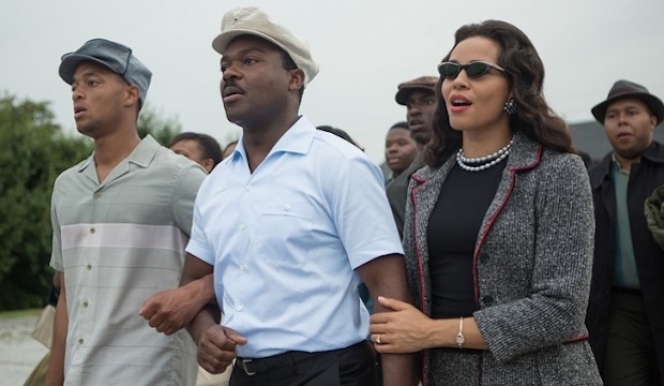 Selma film review: ⭑⭑⭑⭑⭒
Ava DuVernay's Selma is a powerful picture of a period of recent and near-forgotten history: Martin Luther King's march from Selma to Montgomery, Alabama, to implement the long awaited black right to vote – a movement that met with immense opposition by the powers that be.

Selma is a story that needs telling. The film's subversive – and subjective – take on Lyndon B. Johnson's resistance to the motion points importantly to the notion that history is entirely in the telling, yet the film itself falls a little flat. Certain plot-lines are picked up and dropped without further mention (Tessa Thompson's character is a prime example) and some poor casting of its supporting characters means the film at times loses momentum.

Nonetheless, Oyelowo's performance is hair-raising as King. His voice, evokes the radio broadcasts of the '60s, and make us, the audience, feel we too are in these rooms in Alabama, rallying alongside him. It's a performance that clearly demanded a great deal (indeed, Oyelowo literally lived the role for the entirety of filming). In an interview with the BBC's Front Row Oyelowo describes his role as King as less of an 'impersonation' than an overall feeling of an individual: and it's true that his performance evokes not a caricature but a sense of the man and his ceaseless motivation. Selma is worth seeing for Oyelowo's spine-tingling speeches alone.

The camaraderie and intimacy between King's party members is touched upon but never fully developed. Similarly the difficulties met in King's personal life and marriage to Coretta (played by Carmen Ejogo) has a flatness that seems less intentional characterisation and more indicative of a lack of chemistry between the actors, and makes it difficult to sympathise with the film's personal aspects. The film's biopic elements are not treated with enough clarity and as a result seem to sit rather incongruously with the political themes of the story.

There are, however, moments of sheer brilliance. The subtle irony of the approval with which LBJ's affectedly humble closing speech to pass King's motion is met with in Washington toe-curlingly irritating and invokes what must only be a fraction of the indignation that must have been felt at the time, but its a rare moment, in a film whose subtlety lags in favour of the predictable tropes of the blockbuster epic.

The wide-pan shots of the gritty Alabama streets keep any overly romanticised slant on the march at bay, and the panic-inducing, arresting moments of violence jar strikingly with the hopeful excitement of individuals. The film repeatedly stresses the sacrifice that is inherent in all non-violent activism.

Yet, for all its grandeur, something doesn't quite tie together. The plot itself is powerful, believable, and a rich blend of optimism and tragedy, yet it remains a little on the side of the predictable.

Whilst Selma may not be deserving of the array of 'across-the-board' Oscar nominations that many have called for, it's difficult not to be convinced that Oyelowo's lack of nomination for Best Actor – especially in contrast to recent years – is more than a question of mere difference in taste. Oyelowo's snub certainly points towards either a political manoeuvre or a worrying lack of diversity in the industry.