Opposites still spark in this snappy and heart-warming rom-com told through the first and last hour of a relationship, writes Lucy Brooks 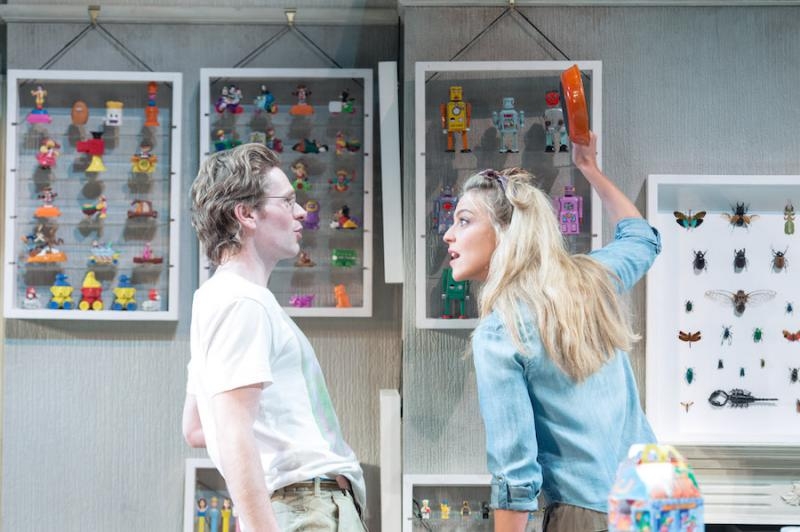 Culture Whisper review: Hello/Goodbye, Hampstead Theatre ⭑⭑⭑⭒⭒
Without giving too much away, you more or less know what's going to happen as soon as a housing mix up thrusts whiny whirlwind Juliet and meticulous nerd Alex into the same flat one sticky summer afternoon. Screenwriter turned playwright Peter Souter cites Notting Hill writer Richard Curtis as a major influence and certainly the fuzzy fun of a romcom is very present in his debut play, Hello/Goodbye. Despite the genre's prerequisite predictability, Souter's focus on the first and last hour a relationship saves the script from a tired 'boy meets girl' scenario and allows the audience to piece together the 10 year relationship from the bookended prickly beginning and elegiac end.

While the first half, the Hello, bubbles with laugh-out-loud jokes, but we found it hard to like, believe or care about the characters; a spoilt only child with daddy issues and an almost-autistic dark horse geek felt flatly caricatured. Miranda Raison (Spooks) brought plenty of gumption to Juliet, and succeeded in making the hair flipping and foot-stamping genuinely grating. Thankfully such histrionics were balanced by well-timed wry insights from Sean Evans (Endeavour) as Alex.

After a start that is irritating and amusing in equal measure, the tonal shift to a bitter and weary Goodbye in the second half was welcome. The shallow characters were fleshed out with the weight of a failed love affair and all its accompanying resentment and regret. Raison's deft transition from annoying to sympathetic was surprising, as the ghost of the younger, brasher Juliet, is shot through with cynicism and defeat. Candid and cliché-free, the relationship is revealed through a pile of detritus, which elegantly mirrors the 'stuff in boxes' sense of transition of the opening. The intimate memories held in objects including a taxidermy pet and a bowl of pebbles are touching and the humour becomes bitterly human in the place of some of the hollow gags of the first half. All builds to an ending that, for the cynical is a tad contrived -- but if you allow yourself a little whimsy, it's also charming.