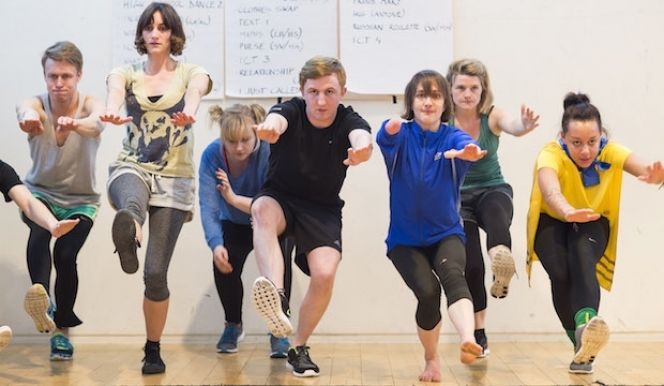 Culture Whisper Review: A Series of Increasingly Impossible Acts, Tricycle Theatre ⭑⭑⭑⭑⭒
'Be Authentic' reminds a scrawl at the back of the stage and it is this demand upon which the whole Series of Impossible Acts rests.

Any notion of dramatic pretence is splintered as the ensemble cast, clad in sports wear, invite the audience to pick a name out of a hat.
The chosen performer becomes the show's protagonist, and the subject of series of gruelling challenges. When we saw the show it was the endlessly energetic Stevie (Steven Webb) taking centre stage, but each show is subject to chance, making a set, standard outcome impossible.

The tasks are like a series of barmy drunken bad ideas in a circuit training format: bend metal, perform extreme contortion, lick your own elbow, eat an entire lemon... You'll gasp and laugh and feel a certain admiration for such determination in the face of failure.
Between these physical feats, the performer is subjected to an equally overwhelming barrage of emotional trials. This was what set the show apart from standard physical theatre. From formative experiences such as a first kiss to quick fire blunt, brutal questions ( 'what do you hate most about yourself?' 'are your parents proud of you?' 'do you spend all your time together laughing) a complex character and narrative is revealed. The improvised reactions, while only spontaneous within the show's set structure, create some of the most honest and unexpected utterances we have seen on stage. And while there was a rawness to much of the soul-searching, there were also moments of surprising, splutter-inducing comedy, which sprang so organically from the moment that the audience feel like a part of the theatrical adventure. With each return to the circuit of Impossible Acts, there was a new significance, as the actor became increasingly exhausted, but also less isolated, able to rely on the ensemble for help.

Like a teenage game of truth and dare, A Series of Increasingly Impossible Acts can be shocking and raw, but there's an essence of therapy in the protagonist's self-revelation, plus an enlightening sense of performative self-awareness. 'What's tonight's show about?' Stevie was asked, and it very much feels like the answer is different each night.

In a lot of ways the show is more like the warm up and training exercises that actors face at drama school, all aiming to splinter inhibition and interrogate motivations to create a connection with audience. If you like your shows with a slick narrative and solid thread of plot, steer clear. But if you're looking for a more challenging and eye-opening experience, A Series of Increasingly Impossible Acts is a delight.